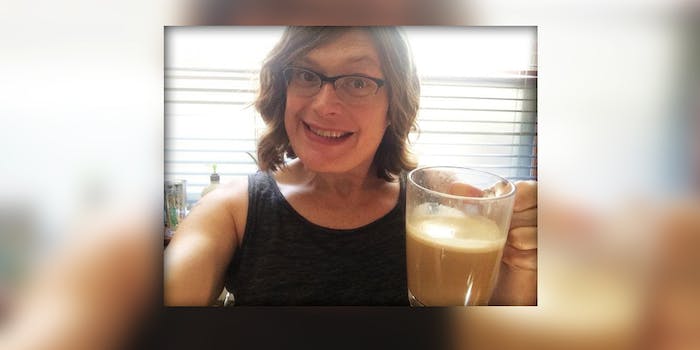 In 2016, it's hard to believe forced outing is still an issue.

On Tuesday night, famed film director Lilly Wachowski came out as transgender—not that she had much of a choice.

Formerly known as Andy Wachowski, Lilly is half of the sibling duo that directed the Matrix series, V for Vendetta, and the recent Netflix hit Sense 8. Her sister Lana Wachowski had come out quietly as transgender in a 2012 video about making the film Cloud Atlas, after several years of media speculation.

Lilly’s announcement, she explained, wasn’t made according to her own timing. Rather, she wrote in a statement published by Chicago’s LGBT newspaper Windy City Times, Lilly Wachowski felt forced to come out after a reporter from British tabloid the Daily Mail showed up at her house on Monday night.

After he had given me his card, and I closed the door it began to dawn on me where I had heard of the Daily Mail. It was the “news” organization that had played a huge part in the national public outing of Lucy Meadows, an elementary school teacher and trans woman in the U.K. An editorial in the “not-a-tabloid” demonized her as a damaging influence on the children’s delicate innocence and summarized “he’s not only trapped in the wrong body, he’s in the wrong job.” The reason I knew about her wasn’t because she was transgender it was because three months after the Daily Mail article came out, Lucy committed suicide.

And now here they were, at my front door, almost as if to say—

“There’s another one! Let’s drag ’em out in the open so we can all have a look!”

Wachowski wrote that she had been preparing for a forced outing during the past year since her quiet, personal transition. Reporters, she said, had occasionally threatened to out her in stories before—but each time, the stories would go away on their own, and Wachowski “was happy to chalk it up to progress.”

My sister Lana and I have largely avoided the press. I find talking about my art frustratingly tedious and talking about myself a wholly mortifying experience. I knew at some point I would have to come out publicly. You know, when you’re living as an out transgender person it’s … kind of difficult to hide. I just wanted—needed some time to get my head right, to feel comfortable.

For many, it’s a shock that forced media outing is still an issue in 2016. GLAAD issued a statement almost immediately after Wachowsi’s letter was posted, scolding the reporter who allegedly made the outing threat and also reminding the press of appropriate guidelines for covering gender transition.

“GLAAD is thrilled that Lilly Wachowski is able to be her true and authentic self today, however, she should not have been forced to disclose her transgender identity before she was ready to do so,” Nick Adams, GLAAD’s Director of Programs for Transgender Media, said in a statement. “Journalists must learn that it is unacceptable to out a transgender person, in the same way it is unacceptable to out a person who is gay, lesbian, or bisexual.”

In the Daily Mail‘s own Wednesday morning coverage of Wachowski’s coming-out statement, the publication acknowledged her accusation but “categorically denied” that its reporter threatened to out her or forced her hand.

As Ms. Wachowski says herself, we were not the first media group which approached her and we made absolutely clear at several points in the conversation that we were only interested in doing the story with her cooperation and had no intention of publishing anything without her consent. Our reporter was extremely sympathetic and courteous at all times. We are baffled as to why Ms. Wachowski has reacted as she has but we wish her well with her journey.

Regardless, high-profile members of Hollywood’s trans community began to issue statements about the incident, condemning the lingering specter of forced outing. Jen Richards, co-creator of the webseries Her Story and also a Chicago native like the Wachowski’s, took to Twitter to help explain the decision Lilly had taken.

Lily has a big heart and a great sense of humor; she starts her own statement with "SEX CHANGE SHOCKER—WACHOWSKI BROTHERS NOW SISTERS!!!" :D

She wanted nothing more than privacy as she navigated this, but the press being what it is, forced her hand. It sucks, but was inevitable.

I never felt like I was keeping a secret, but rather privileged to share in her journey. She's good people. I'm glad to call her my sister.

My original advice to Lilly was to wait until Caitlyn came out (this was a while ago), then release a two-word statement: "Me too!"

You all are SO sweet. Lilly appreciates your support. All things considered, she's in good spirits. Thanks everyone! xo

Also on Twitter, author and MSNBC host Janet Mock offered support to Lilly Wachowski in the wake of the growing media frenzy over her coming out: “Sorry your trans-ness warranted tabloid threats, but welcome to the sisterhood!” And Sense 8 star Jamie Clayton offered a simple “YASSS LILLY” on Twitter, paired with a ‘praise hands’ emoji.

Human Rights Campaign issued a statement as well, condemning the history of media outlets pushing LGBT people to come out before they are ready to do so on their own.

“Coming out is a long and arduous process. For those people whose gender identity or innate sense of their own gender doesn’t match with the gender assigned at birth, unraveling and expressing it can be complex and difficult,” read HRC’s statement. “HRC stands in support of Lilly for taking this brave step forward and condemns the outlets that attempt to threaten those on their personal journey to living openly and authentically.”