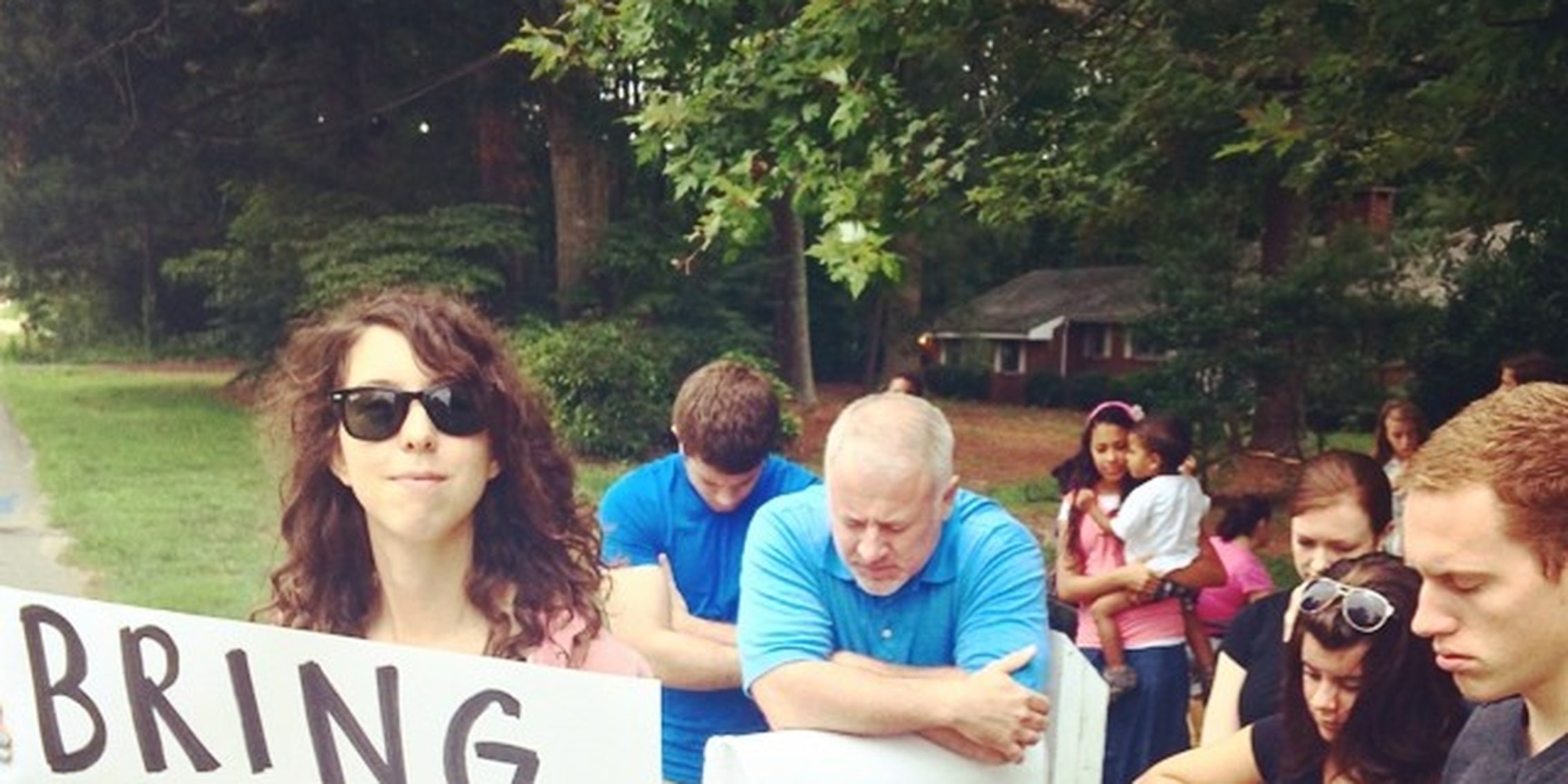 This couple’s counter-protesting with pro-lifers, and documenting it on Tumblr

These are the signs you've been looking for.

In late June, the Supreme Court rejected a law, enacted in 2007, that required 35-foot buffer zones around abortion clinics in Massachusetts. This law was intended to help minimize episodes of violence and harassment against women and families entering clinics, but the Supreme Court decided it violated the First Amendment.

While some pro-life advocates will continue to resort to violence and hate to get their message across, other protesters have more subtle techniques. One Raleigh, N.C., couple—Grayson Haver Currin, a writer for Pitchfork and music editor at Indy Week, and his wife Tina, a copywriter and creative strategist—has been protesting alongside pro-lifers at a clinic in Cary, N.C., every Saturday morning since March. But their signs take a different approach. 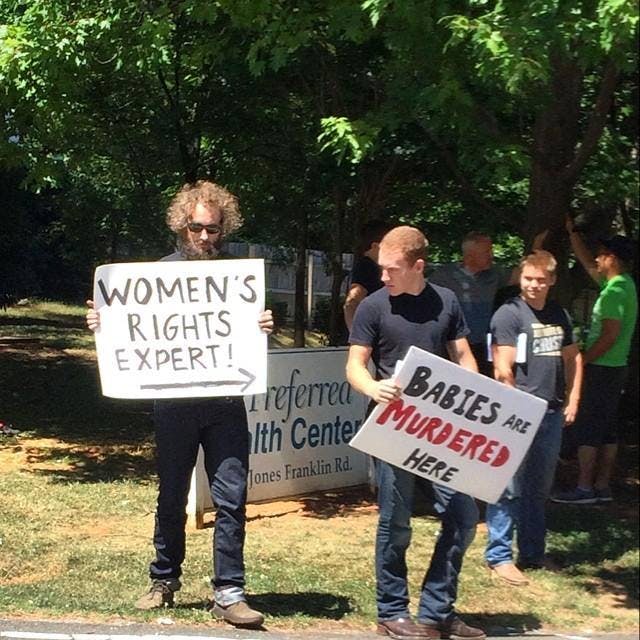 Two days ago, Tina started the Tumblr Saturday Chores to document their glorious counter-protest technique. Grayson explains how this movement came about:

“There’s no big-box hardware store very close to where we live, so we were driving toward a suburb of Raleigh called Cary, which runs over with strip malls. We were getting supplies for a garden box. We both grew up not too far away, and we’ve seen the clinic in question hundreds of times. But for some reason, on this morning in particular, the protesters got under our skin a little more than normal. I’m full of crazy ideas and jokes, and Tina tells me which rare ones are good. I suggested that we make a sign that said ‘Weird Hobby’ and point at one of the protestors. She loved the idea and vowed that, if they were there when we passed back by, we’d do it.

“We tried to buy poster board at Home Depot, but they don’t carry it. As we were leaving, Tina ripped a vinyl sale sign off of a display and took a Sharpie to it. We posted the results to Instagram and Facebook, and people flipped. We vowed to keep doing it, and most every week we’ve been in town since then, we’ve counter-protested with a new sign. Some are surreal, and some are serious. We do our best to not talk to the pro-lifers, but they often pray for us and sometimes tell us that the righteous will destroy the wicked, us included. They’ve told us that we believe in God and are simply ashamed of it. In turn, we’ve dug pretty deep into their online network of craziness, and it knows no bounds of joy and sadness. We plan to keep doing it as long as they can. Already, they’ve taken to putting their signs down when we show up, which we consider an important if brief victory.” 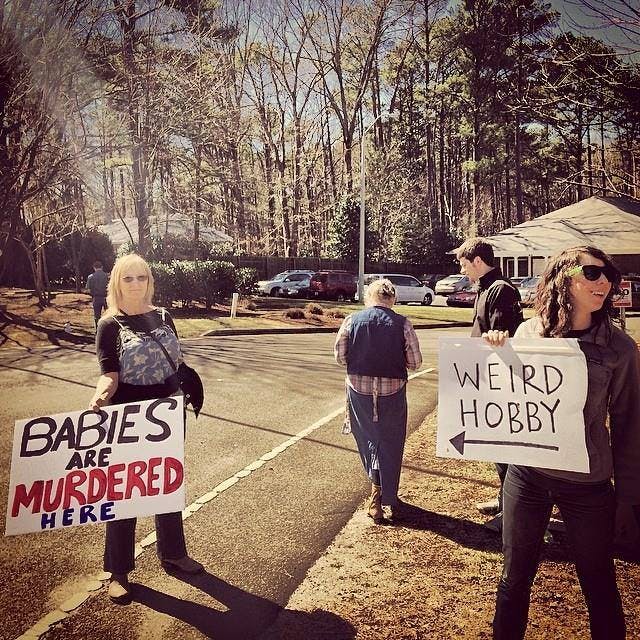 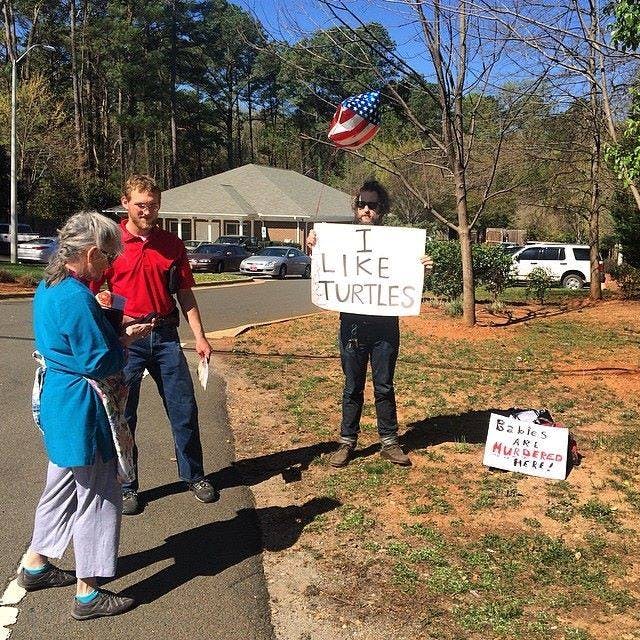 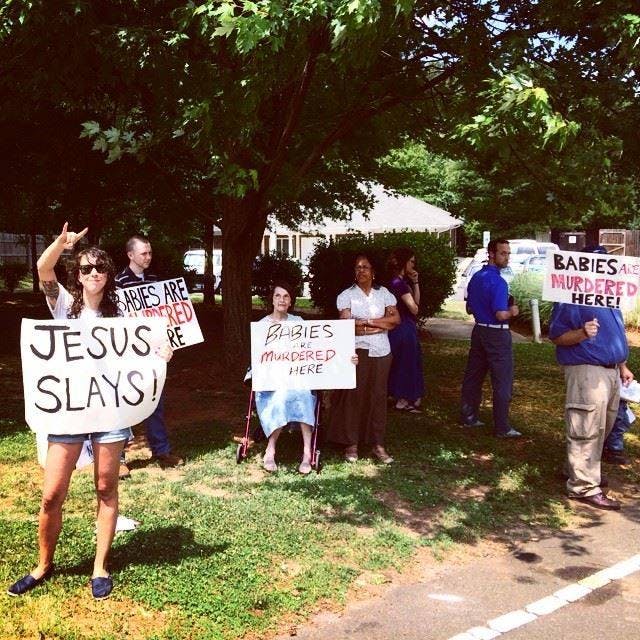 On Saturday, Grayson and Tina plan to show up early with friends, and take over the curb, so “they’ll have to squeeze into our ranks, as we normally do with theirs. And if we’re lucky, we’re going to write out pi to 100 digits for one of Saturday’s signs.” 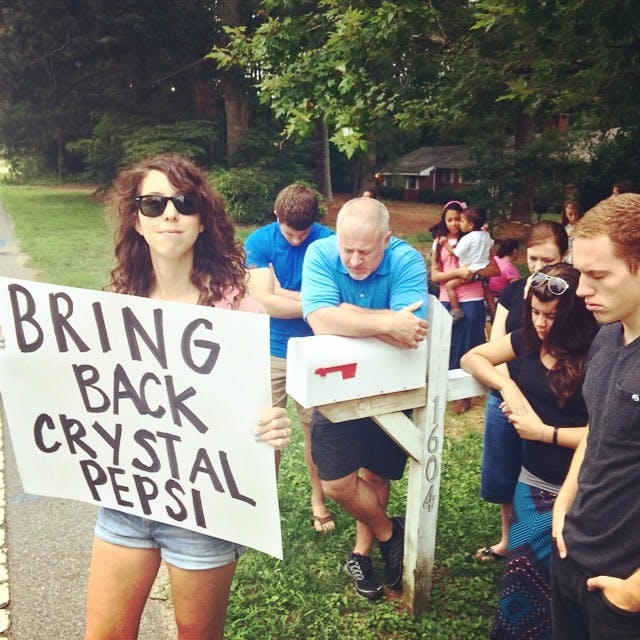 He states that though this is satire, there’s an important message behind the signs.

“While it’s true that we’re mocking people, we consider the chief value of what we’re doing the solidarity that we demonstrate for the individuals or families that need to use the clinic’s services for whatever reasons they may have,” Grayson says. “Generally, upon arrival, they only encounter hate. We want to offer a rejoinder, however slight. And we also hope to show passersby on the busy thoroughfare that the far religious right need not be the only ones with a voice; those with progressive views have one, too, and we should use it.”