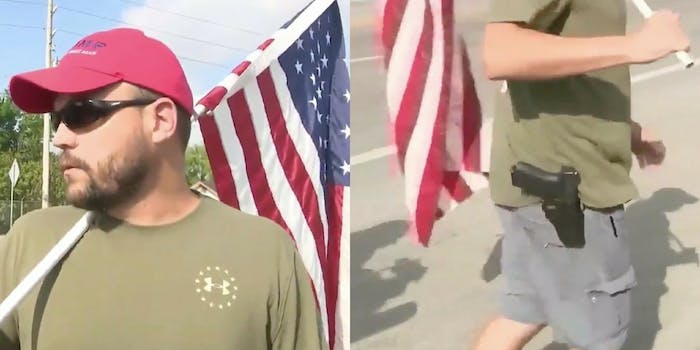 He said he needed to 'get to the school. Make America great again.'

Hours after a school shooting in Santa Fe, Texas, left at least eight people dead, a man wearing a Trump MAGA hat, holding the American flag, and openly carrying a handgun arrived on the scene.

According to a clip shared on Twitter by Scott McGrew, an NBC anchor in San Francisco, the man, who was not identified, showed up to the school following the shooting. The interview took place at a Shell gas station, which Google Maps shows to be less than half a mile down the street from the school. According to NBC News, he was immediately stopped by police.

“What was going through your head when you found out that this as going on?” an anchor asks the man off camera.

“Get to the school. Make America great again,” he responds, invoking the slogan of President Donald Trump.

“What was your plan of action?” the anchor asks.

The shooting at Santa Fe High School took place at 7:45 local time, and began in an art class, according to some witnesses. Law enforcement officials say the shooter was armed with a shotgun and is a 17-year-old student at the school; they have also confirmed finding explosive devices on and off the school campus. CNN reports that at least 12 people are hospitalized.

Another man interviewed at the gas station responded to that man’s exuberance, stating that while he was also a gun owner and a Second Amendment supporter, he felt the school needed “prayers.”

Under Texas’ “open carry laws” that went into effect in 2016, it’s legal for handgun permit holders to openly carry handguns in public areas.

Speaking at an unrelated event, Trump said shootings have “been going on too long in our country,” and he’s “determined to do everything in our power to protect our students, secure our schools, and to keep weapons out of the hands of those who pose a threat to themselves, and to others.”

Guns and prayers: A man shows up to the Santa Fe High School (Texas) shooting with an American flag and a gun. Another man says "it's an embarrassment." pic.twitter.com/TAixNrJCPp