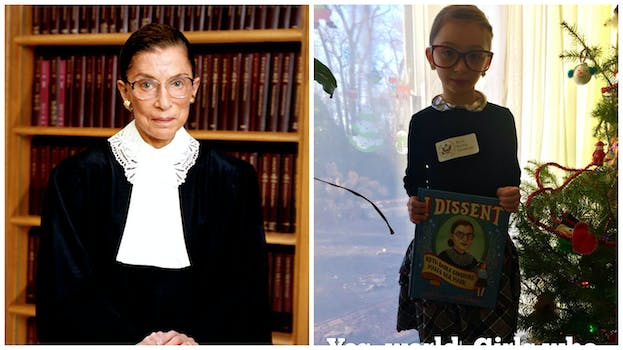 This 8-year-old girl’s superhero is Ruth Bader Ginsburg, and it makes perfect sense

The costume is amazing.

Since Donald Trump won the presidency, more than 4,500 women have registered to run for office. But forgive 8-year-old Michele Threefoot if she’s not interested in trying to win elections. No, Michele might be more fascinated by eventually landing a seat on the Supreme Court, just like her hero Ruth Bader Ginsburg.

Michele has been reading about Ginsburg—her struggles as a child and, later, as a woman—so when it was time for Superhero Day at her school this week, Michele only had one option: the Notorious RBG.

Michele’s mom, Krista Threefoot, told the Huffington Post that her daughter learned about Ginsburg from a children’s book called, I Dissent: Ruth Bader Ginsburg Makes Her Mark. And the lessons in that book have remained.

“The book talks a lot about the prejudices Ruth Bader Ginsburg faced as a child and about how she has worked her whole life to fight inequality in our country,” Krista Threefoot told the website. “Michele gets pretty passionate about unfairness, especially relating to girls and women, so the book’s message really stuck with her.”

Said Threefoot: “She and her sister aren’t really into Marvel superheroes, so I was just going to put them in Supergirl capes and masks. But while our family was talking about it, she told me she wanted to be Ruth Bader Ginsburg. So we went with it.”