He says he was just asking his students a rhetorical question about gun control. The NYPD thought it was a threat.

Rutgers professor Kevin Allred accused the NYPD of police intimidation after they took him for psychiatric evaluation based on political comments he made on Twitter.

According to Allred’s tweets from Tuesday night, the New York Police Department visited him at home to investigate “political statements” he made “on campus and on Twitter.” They then took him to Belleville Hospital to be evaluated, where he says doctors labeled the situation “ridiculous.” According to Allred, one doctor pointed out that politicians say more inflamatory things on live TV with no repercussions. 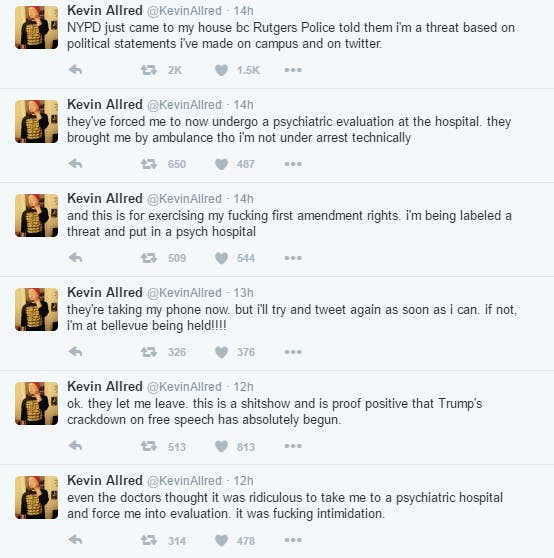 & to be clear: my statements the police labeled threats were abt burning the american flag& me posing a rhetorical question on 2nd amendment

i said: would conservatives care as much abt the 2nd amendment if guns killed more white people? a question meant to expose double standard

In a statement to the New York Daily News, the NYPD said, “We were informed by Rutgers PD that he made threats to kill white people and he was subsequently taken to Bellevue Hospital for evaluation.” Allred, who is white, said he was merely posing a rhetorical question about public attitudes to gun control, asking, “Would people feel the same way about being so lenient with the Second Amendment if people went out and got guns to shoot random white people?”

On his website, Allred describes himself as a feminist author and educator. He teaches a class called “Politicizing Beyoncé,” and his previous tweets suggest that he supports gun control.

that tweet was not a threat. it was a hyperbolic question posed to show a double standard-look at context/tone of most every tweet i make.

Allred’s experiences with the NYPD contrast starkly with the overall attitude toward controversial statements made on Twitter. Despite recent updates to the site’s anti-harassment measures, people still post rape threats, racist and sexist comments, and anti-Semitic memes on the site, often with no repercussions.

On the morning after this ordeal, Allred tweeted, “Now more than ever it’s important to fight back, make your voices heard, push for change in WHATEVER way you can. cuz Trump wants us silent.”