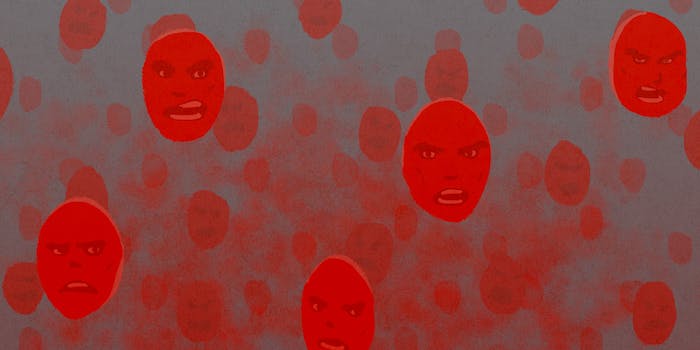 Are the meetups really cancelled or is it a ruse?

On his anti-feminist blog Return of Kings, Roosh called for male followers to gather this Saturday, Feb. 6, for what he referred to as International Meetup Day. Locations spanned from Sydney to Toronto, London to Edinburgh, and San Francisco to Barcelona, with multiple meetups scheduled in larger cities like New York City and Seattle.

Roosh and his blog regularly espouse typical men’s rights activist (MRA) views that society is a “dominating neo-matriarchy where men dare not lift their heads.” He believes that rape should be legal and, in a 2014 interview with the Daily Dot, said, “[T]here’s a lot of cases where a woman uses rape to resolve guilt that she was too easy.” He’s also stated that men and women are “absolutely not” equal and called  homosexuality “a deviant lifestyle.” In December 2015, he was featured in Reggie Yates’ BBC documentary Extreme UK, telling an all-male audience that in modern culture “women are now being encouraged to look like fat, outer-space cyborgs … Women and gays are seen as superior to straight men.”

In a FAQ post about the Feb. 6 meetups, Roosh explained the gatherings would a chance for MRAs to “‘come out’ of the shadows and not have to hide behind a computer screen”:

“I ask that you share details of the meetup with friends of yours who you think may be interested. Our views are becoming known enough that we can ‘come out’ of the shadows and not have to hide behind a computer screen for fear of retaliation. Up to now, the enemy has been able to exert their power by isolating us and attacking with shrieking mobs, but we’ll be able to neutralize that tactic by amassing in high numbers come February 6.”

Also in the FAQ section, Roosh explained that meetings are for heterosexual men only, and if “crazy feminists show up,” attendees should “record them with your camera, upload the footage to Dropbox, and then send it to me … afterwards so we can tear them up.” He also vowed to “exact furious retribution” on anyone challenging attendees of the meetups.

Yesterday, Roosh announced on Return of Kings that the meetups on Feb. 6 were cancelled. He elaborated:

“I can no longer guarantee the safety or privacy of the men who want to attend on February 6, especially since most of the meetups can not be made private in time. While I can’t stop men who want to continue meeting in private groups, there will be no official Return Of Kings meetups.”

“Roosh, in addition to being a terrible person, is also a bit of a troll. It wouldn’t exactly shock me if Roosh’s alleged cancellation turned out to be nothing more than a ruse.”

That being said, Futrelle added that given the scale and breadth of counter-protests planned, it may be equally credible that Roosh has realized “he would look foolish if, in location after location around the globe, tiny groups of Roosh fanboys faced off against big crowds of mocking feminists.”

The international community quickly organized to oppose the Feb. 6 meetups. A Change.org petition to stop meetups taking place in the U.K. gained more than 75,000 signatures in two days. A 38 Degrees petition asking the Scottish government to “Stop Roosh V being allowed to promote his hateful violent views in our cities,” (meetups were planned in Edinburgh and Glasgow) has more than 57,000 signatures at the time of publication. Another petition on the same site to “Shut Down Roosh V Meetings in Wales” had more than 7,000 signatures in one day. An Australian petition asking New South Wales police to prevent a meetup on the grounds that it constitutes hate speech gained over 100,000 signatures; the police agreed to monitor the planned Sydney meetup.

Counter-demonstrations were also organized in cities across England, Scotland, Ireland, and the U.S., with protestors planning to challenge or disrupt the meetups. Some counter-protests were organized in private groups and asked participants to keep details secret, presumably for reasons of safety; others went public on social media, such as one counter-protest organized in New York City’s Washington Square Park.

There are two Facebook events for counter-protests in Iceland; one in Belgium; and several in the Australian cities of Brisbane, Sydney, and Melbourne by the wonderfully named feminist group “Mad Fucking Witches.” New Zealanders are holding an #AntiMisogynyParty in Auckland and a peaceful protest in Wellington. (In light of the cancellation, it is unclear whether all of the counter-protests will still go on.) In Canada, the mayor of Ottawa, Jim Watson, started the hashtag #TurnAwayReturnofKings to show his opposition to Roosh and his supporters, and had barred the group from renting any city buildings. The respective mayors of Calgary, Toronto, Edmonton, and Winnipeg all tweeted their support as well.

The social media conversation about Feb. 6 has largely referred to the gatherings as being “pro-rape.” For example, actress Sophia Bush tweeted a warning about “’pro-rape’ meetups” on Tuesday.

"Pro-rape" meet ups scheduled all across the country. Stay safe. Alert your news media to COVER this. ID these men. https://t.co/Yh61SavYcA

However, Roosh has only described them as an opportunity for his supporters to meet each other and form “tribes.” As Kim LaCapria points out in a post for rumor-debunking site Snopes, “Although [the Valizadeh-edited blog] Return of Kings regularly publishes material of an offensive nature regarding women, rape, sexuality, and a number of other matters, the description of the February 2016 events does not mention any of those topics.”

It seems that even Roosh is aware that his appeal is extremely niche, as one of the FAQs on his blog post about the meetups is “What if no one shows up?” His tactful answer: “That means your city is not yet ready for meetups.” So for now, it remains to be seen whether the meetups will actually occur—or whether the prospect of his followers coming face-to-face with a squad of female boxers in Toronto made anyone realize just how unwelcome MRAs are in cities worldwide.

With so many counter-protests waiting to unfold, it seems like Saturday Feb. 6 could actually end up being nothing but a merry feminist get-together.