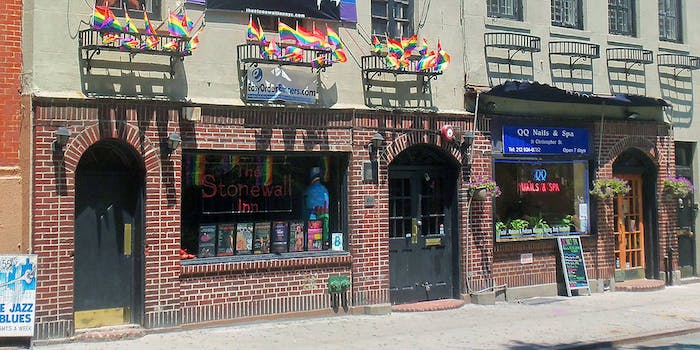 Roland Emmerich just dug himself an even deeper hole.

He wasn’t the Hollywood director you’d expect to take the reins of a film commemorating the Stonewall riots—that turning-point event often credited with launching the LGBT rights movement.

But Roland Emmerich, who is gay and also brought us blockbusters like Independence Day, The Day After Tomorrow, and probably the single most awful version of Godzilla ever made, went and did just that. And when the trailer for his version of the Stonewall narrative hit YouTube last August, it was roundly panned online as a “white-washed” version of history that erased many of the LGBT people of color who were central to the uprising.

Unsurprisingly, Emmerich’s Stonewall failed at the box office, pulling in only $112,414 during its opening weekend. In nearly a year since, the film’s total take has barely doubled that. In an interview with the Guardian last Saturday, Emmerich blamed the film’s failure on the internet.

“My movie was exactly what they said it wasn’t. It was politically correct,” Emmerich told the Guardian. “It had black, transgender people in there. We just got killed by one voice on the internet who saw a trailer and said, this is whitewashing Stonewall.”

Not satisfied with blaming the massive outrage about Stonewall on “one voice on the internet”—despite the fact that the film was also excoriated by critics for its poor overall quality—Emmerich took his comments one step further, and ignited yet another online wave of rage.

“Stonewall was a white event, let’s be honest,” said Emmerich in the interview. “But nobody wanted to hear that any more.”

That didn’t go over so well, considering that historical evidence shows that black and Latina transgender icons like Sylvia Rivera and Marsha P. Johnson, as well as butch lesbian drag king Stormé DeLarverie, were central to the Stonewall uprising.

On Twitter, the reaction to Emmerich’s comments ranged from mildly annoyed to vitriolic.

Roland Emmerich: 'Stonewall Was a White Event' https://t.co/Y4orbSlE54 I don't even understand what that means. Like…burning man?

If Roland Emmerich wants to jerk off to his revisionist, white-washed version of Stonewall, he can go ahead. Just don't claim it's fact.

Can someone tell Roland Emmerich to have a stadium full of seats? Because clearly he's learned nothing from last fall's Stonewall critiques.

Claiming that the Stonewall riot was “a white event” isn’t the first time Emmerich has angered the LGBT community. Last September, the director told BuzzFeed that he specifically made the film’s starring role “very straight-acting” so that straight audiences could relate to the film.