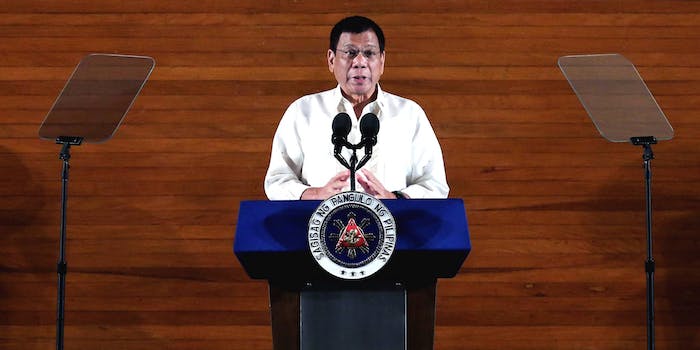 Thousands of people have reportedly been killed under his watch.

Rodrigo Duterte, the president of the Philippines, is currently facing a suit filed at the International Criminal Court in The Hague accusing him of crimes against humanity. Despite that, President Donald Trump has invited him to the White House, bestowing a distinct honor on a man accused of orchestrating a campaign of lethal brutality against thousands of his own people.

In a readout of a call between the two leaders released on Saturday—Trump’s 100th day in office, as it happens—the White House confirmed the invite, saying it was offered by Trump during the conversation.

This raises the likelihood that the International Criminal Court will be actively considering crimes against humanity charges against a world leader at the very same time he’s in Washington on an official visit, a sight that could be damaging to U.S. credibility on matters of international human rights.

Back in December, Duterte claimed that Trump praised him for his stance on drugs in a phone call. According to the readout released on Saturday, Trump and Duterte discussed “the fact that the Philippine government is fighting very hard to rid its country of drugs, a scourge that affects many countries throughout the world.”

Trump invites Duterte to the WH days after a lawyer accused Duterte of "crimes against humanity" at the ICC https://t.co/bJU8t5CVwA

The case is being brought by Filipino human rights attorney Jude Josue Sabio, and his reasoning is simple. According to Sabio’s filing, as well as journalistic accounts and Duterte’s own words about his actions, his reign over the Southeast Asian island nation has been a bloody nightmare from a human rights perspective.

Since Duterte came to power in 2016, thousands of people have been slain in extrajudicial drug raids. According to the New York Times, police statistics suggest some 4,000 people have been killed over that time, while Sabio’s filing (as well as estimates from news agencies and human rights watchdogs) places the figure at 8,000. Duterte is also vigorously anti-gay, bucking a previous campaign pledge and opposing same-sex marriage.

A spokesperson for Duterte has condemned Sabio, according the the Times, arguing the suit is intended “to embarrass and shame the president and undermine the duly constituted government of the Philippines.”

Duterte has not been shy about admitting personal responsibility for killing people. Just months ago, he boasted about personally killing criminal suspects while serving as the mayor of Davao City in the 1980s, ultimately admitting he’d fatally shot at least three people. “In Davao, I used to do it personally,” he said, via CNN. “Just to show the guys that, if I can do it, why can’t you? … I would just patrol the streets and looking for trouble also. I was really looking for an encounter so I could kill.”

Duterte has gone so far in his violent anti-drug zeal as to compare himself positively to Adolf Hitler. As Reuters detailed at the time, the 72-year-old commented last October that he’d like to “slaughter” 3 million drug users, comparing the task with Hitler’s slaughter of “3 million Jews” in the Holocaust.

In short, the human rights case against Duterte is clear and uncomplicated, even from an outsider’s perspective. Inside the halls of power in Washington, however, the allegations of extrajudicial mass murder and extreme homophobia were not enough to deter President Trump from inviting the 72-year-old leader for a White House visit.