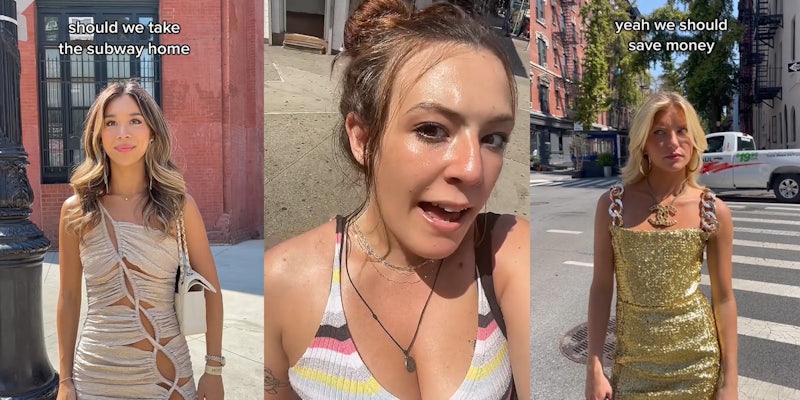 ‘Wealth disparity in NYC is wild fr’: Woman calls out influencers for using Uber in New York while she can’t afford to take the train, sparking debate

‘Nyc rich is a different kind of rich.’

In a viral TikTok, a TikToker responded to influencers who say they often Uber in New York City, saying she “can’t even afford the train.” The video sparked debate in its comments section about wealth inequality and rich influencers being “out of touch” with reality.

The video, which has over 198,500 views, was posted earlier in the month by TikToker Court. Court has over 235,900 followers on her backup account (@itscourtdourt) and main account (@court0o0) for her vlogging and storytelling videos which discuss houselessness, addiction recovery, and harm reduction.

In the viral video, the TikToker reacts to a video from two fashion and lifestyle influencers, Lauren Wolfe (@laurenwolfe) and Acquired Style (@acquiredstyle). In the original video, the two creators mimic a dialogue debating if they should take an Uber or the subway, writing in text over their video: “Should we take the subway home…I’ve been spending wayyyy too much on Uber recently…Maybe we can take cute subway pics too.” The girls then film themselves dancing in the back of a car, seemingly deciding to take the Uber.

“Wait yall fr are ubering everywhere in nyc?? i thought yall were joking ab not taking the train, i cant even afford the TRAIN everyday i’m hopping from 6am-730pm daily. wealth disparity in nyc is actually wild fr,” the TikToker wrote in text over her video.

“No hate to these girls i just didn’t realize there were real ppl in ny who dont walk 20 blocks take the bus take the train like not even a taxi? … we in different tax brackets fr,” the TikToker captioned the video.

The video sparked controversy in its comments section, with viewers debating New York’s wealth inequality. Some shared their own experiences trying to afford transportation in the city.

“Bruh I couldn’t even convince myself to take the subway half the time. I was like ‘it’s a mile to walk just walk,’” one user shared.

“Pls i feel this one time i walked home from midtown to bedstuy i was almost to the end of the manhattan bridge like determined to keep going,” the creator of the TikTok replied.

Many viewers criticized the influencers in the video for being “out of touch.”

“The nyc ‘influencers’ are actually so out of tune I had to block all of them,” one user said.

“Find me sleeping in the background of their cute pics,” another joked.

“Thats where my jaw dropped,” the creator of the TikTok replied in comments. “LOL pls literally bc i used to sleep right in the uptown stations!! me and my blanket… nyc rich is a different kind of rich. its crazy to coexist.”

New York is widely regarded as one of the cities with the greatest wealth disparities in the United States. The Gini index, which is a measure of income inequality used in the U.S. census, has been stagnant for New York since 2013, and is worse than the Gini index for cities like Los Angeles and Chicago, according to the New York Times.

According to the New School’s website, approximately 20% of New Yorkers live in poverty and almost 50% of households are considered “near poor.” New York’s shelter system is also currently dealing with an influx of migrants, leading the city to open emergency shelters. The average length of time houseless people stay in shelters before moving to permanent housing has increased in recent years and is now around 500 days, according to the New York Times. The inequities in housing and wealth in New York are widely seen as being rooted in a history of racist redlining and gentrification, as high-paid tech and finance workers move into the city.

However, concern over the safety of subway transportation in New York has grown this year, particularly after the April 2022 subway shooting in Brooklyn and the January 2022 murder of Michelle Go, an Asian woman who was pushed into an oncoming subway train. NYPD data showed that from 2020 to 2021 subway assaults were up by 28%, and anti-Asian subway hate crimes were also shown to be on the rise. Harassment on the subway is also common, particularly for women and people of color.

Due to widespread fears of assault and harassment on the subway, some viewers of the viral TikTok came to the influencers’ defense, saying, “Tbh they probably mean it in more of a safety way, esp with how they’re dressed I’d be scared of being harassed period.”

“I get ‘safety issues’ but some of us cant afford to uber regardless of the subways safety, i was just shocked by their access to wealth,” the creator of the TikTok responded in the comments. “I’ve been harrassed/in dangerous situations on the train but I have no choice but to take it everywhere bc im unhoused. safety and self care are both privileges in many situations.”

The Daily Dot reached out to Court, Lauren Wolfe, and Acquired Style for comment via email and TikTok comment.