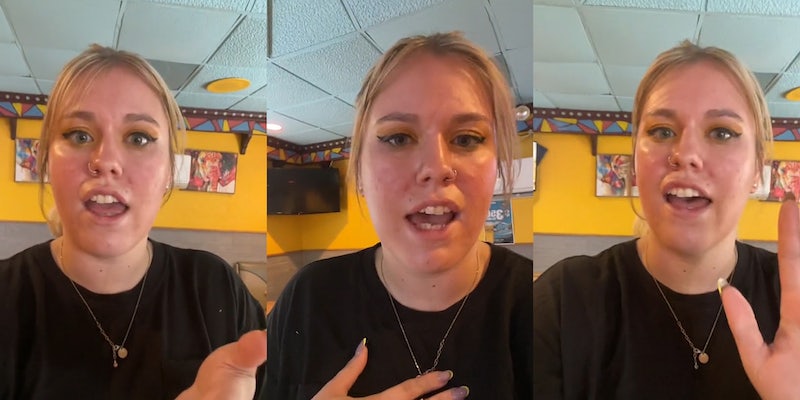 ‘So it sounds like I’m more concerned for their wellbeing than I am for my server’s living wage’: Restaurant manager shares how she subtly calls out customers who don’t tip

'This would be such an inappropriate conversation to have with a customer.'

In the past couple of months, conversations surrounding tipping and tipping culture have been happening all over TikTok. Servers are posting about what they feel is a standard tip, and other have lamented about the pressure they feel to tip baristas and employees at self-service establishments. The discussion is continuing, as a restaurant manager explains in a viral TikTok how she calls out customers for not tipping their servers.

Hannah Pemberton (@hannahlikemontana11), who is a restaurant manager and server, posted a TikTok on Aug. 16 saying that when customers don’t tip their server, she goes to their table and asks them if there was an issue with their service, “so it sounds like [she’s] more concerned with [the customer’s] wellbeing than [she] is for [her] server’s living wage.”

In her video, Pemberton role-plays an interaction she might have with a customer who doesn’t feel they have a responsibility to tip. In response to a customer saying that it isn’t their “job to pay the employees a living wage,” Pemberton says: “So you admit that you know that we don’t get paid more than $2 an hour (in some states)?”

“Tipping culture in the U.S. is kind of set like that,” Pemberton says in her TikTok. “So, it’s your job as us offering you a service and giving you a pleasant experience to tip us for that service.” The TikToker’s point is because tipping culture is “never going to change,” customers should tip.

In her TikTok’s caption, Pemberton wrote that not tipping is “lazy and rude.” On Tuesday, her video had over 26,000 views on TikTok.

Many commenters on Pemberton’s video agreed with her sentiment that because tipping culture probably won’t change, servers need to be tipped.

“Being waited on hand and foot [is] a luxury we agreed to pay for [when] we walk into a restaurant [with] service,” @hannahseminerio26 commented.

On the flip side, others argued that Pemberton’s example would be “inappropriate” to say to a customer.

“This would be such an inappropriate conversation to have with a customer,” @kenzie_banksxo commented. Pemberton responded that that’s not the case because she acts in a professional matter.

“I think this would be an inappropriate conversation to have with a customer because tipping is not required,” @babybluedrops commented. “It’s just a US social norm.”

The Daily Dot has reached out to Pemberton via TikTok comment.