Feminist humor site Reductress is known for its irreverent headlines. But recent visitors to the site’s homepage may have noticed an unusual twist. That’s because editors Beth Newell, Sarah Pappalardo, and Nicole Silverberg made the bold choice to replace their typically broad homepage headlines with nothing but rape jokes. And it’s hilarious.

Pappalardo told the Daily Dot, “[There was] a reaction to [a comedian] being banned from UCB and other theaters [following reports of sexual assault]. [That] was the beginning. That in itself was horrifying to learn about, but the reaction from some people made it all the more difficult to swallow.”

While many in the community rallied to show support for survivors of assault, some were highly critical of the decision to ban the UCB comedian. For example, comedian and Inside Amy Schumer writer Kurt Metzger went on a social media tirade, referring to women as “hens” and blaming women for not going to the police more often after they’re raped.

Newell explained that the editors decided to channel their frustration into headlines. “We put out a call to writers for pitches about their frustrations with the dialogue around sexual assault and similar issues, and the response was overwhelming,” she said (note: the writer of this piece has also contributed to Reductress in the past). “We realized we had more than enough ideas for a homepage takeover and quickly got to work writing and editing.”

Pappalardo added, “We had hundreds of pitches within an hour.”

Although all of the jokes on the homepage are tied to rape and rape culture, some are more subtle. One headline, for example, reads “Fun Summer Cocktails When They Ask You ‘Well, What Were You Drinking?’”

Silverberg explains that this was intentional. “We got to thinking about how we could cover the subject as holistically as possible,” she said. “There are so many facets to being a victim of rape or assault, and we wanted to address as much of it as we could.”

Pappalardo added, “On a normal day, we definitely try to make sure that our pieces are kind of broad and relatable to a large audience, but doing this takeover allowed us to have more nuanced takes on things that make more sense in context.”

They also wanted to be sure not to make jokes that were insensitive. “We didn’t want to write anything too triggering or that would trivialize sexual assault in any way,” said Silverberg. 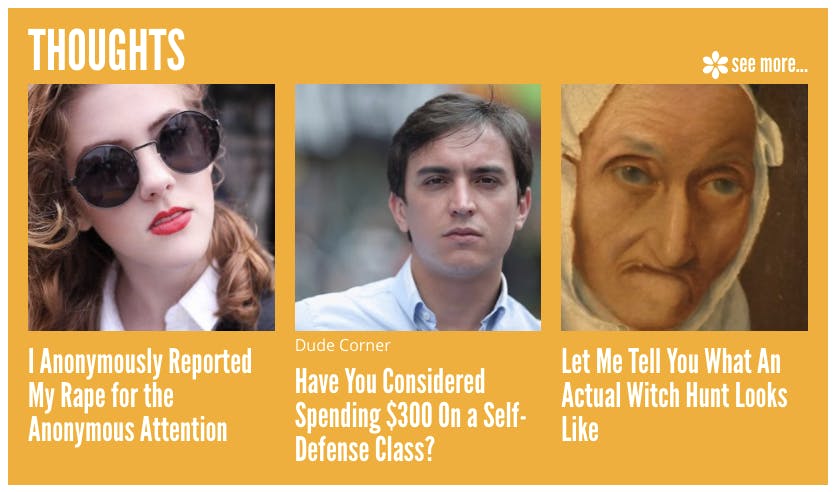 Above all, the editors were sure to cull and craft headlines that were authentic. “We didn’t want to make the rapists seem like a caricature,” said Newell. “We wanted to make it clear that these could be men we know, and unfortunately the rape apologists are men we considered among our friends.”

Pappalardo agreed. “Yep. It’s super easy to make a rapist character be like ‘I’M A BIG DUMB DUMMY’ and it makes it so easy for the average guy to be like, ‘Oh, I’m nothing like THAT guy.’”

“Rape culture isn’t just about the fact that women are raped and face incredible obstacles going forward,” Silverberg said. “There’s a general vibe and philosophy [that gets] indoctrinated, so that even women are like ‘Oh, am I wrong?’”

She added, “You can be a great son, husband, brother, community member, etc., but there are certain basic beliefs that society imprints on you that you don’t even choose. And that type of latent sexism—the impulse to distrust victims and protect men—is a large reason why it’s nearly impossible for rape victims to get justice or closure from an assault.”

While the takeover was sparked by an incident that hits close to home for the Reductress staff, the editors are confident that a lot of women will connect with what they’ve done.

Said Silverberg, “Regardless of whether there’s a high-profile rape or assault case in the news, this is something that thousands of women are dealing with daily. So the site today is for them.”

And as for men who may feel threatened by the jokes, Silverberg clarified, “Reductress is not an anti-men site. We looove men. But at the end of the day, we’re pro-women.”

The editors will release a much broader, very pro-women book titled How to Win at Feminism in late October. But, according to Pappalardo, today their focus is clear: “#DismantleTheRapiarchy!”