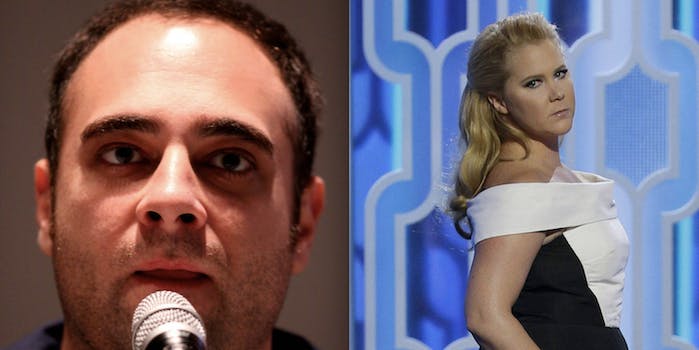 There’s been plenty of outrage on social media following the light sentencing of convicted rapists Austin Wilkerson and Brock Turner.

The latest rant in the world of “how rape should be handled” comes from comedian and Inside Amy Schumer writer Kurt Metzger. Metzger, who went head to head with writers Lindy West and Sady Doyle in 2013, wrote a public Facebook post on Saturday ridiculing members of the Upright Citizens Brigade (UCB) comedy community.

In his post, Metzger mocked a series of social media posts that spread on Saturday for calling out an alleged rapist and offering solidarity to survivors of sexual assault. The posts were written largely in response to news that had circulated in private Facebook groups that a comedian had been banned from Upright Citizens Brigade theaters and training centers, based on private reports of alleged rape.

According to those sharing the news, there were multiple complaints from different women that the same man had raped them over the course of several years. Not all posts directly named the comedian involved. Several members of the community simply posted, “I believe women,” or shared their own stories of surviving abuse and sexual assault. Metzger, however, felt the posts were symptomatic of a dangerous “call out” culture and posted the following. 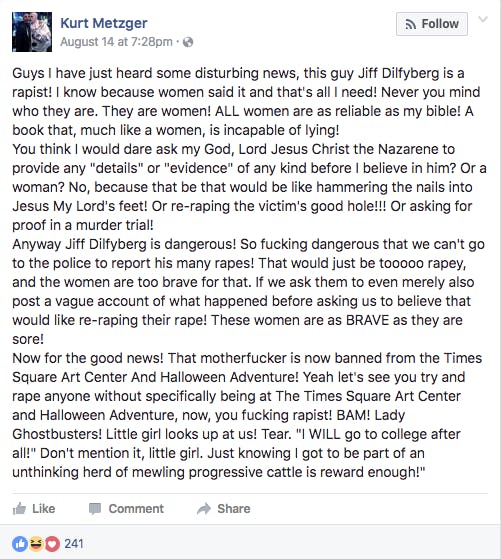 Metzger’s post earned him hundreds of likes, but not everyone was amused.

Comedian Nikki Black passionately detailed her concerns about Metzger’s original post on Medium in a post quite bluntly titled, “Kurt Metzger Needs to Shut Up.”

Metzger seemed to revel in the attention.

Having this written about me is better than receiving a fucking emmy. https://t.co/lzAQQ5Fpuv

Metzger also continued to post publicly on his Facebook account, arguing that victims must go to the police to seek justice. According to Metzger, those who don’t urge victims to do so need to “pull [their] heads out of [their] cunts and [their cunts] out of their blogs…”

At a basic level, Metzer is calling out the problematic nature of assuming someone is guilty, based on mere allegations, until proven innocent (see: Rolling Stone‘s UVA rape debacle), and the ripple effect that UCB’s decision could have. But he’s making his argument in a way that’s intentionally inflammatory and misogynistic. Metzger, for example, referred to women as hens.

He also said this kind of criticism gets his “dick hard.”

Metzger even changed his Twitter bio to self-identify as a “cuck” and “rape apologist.” 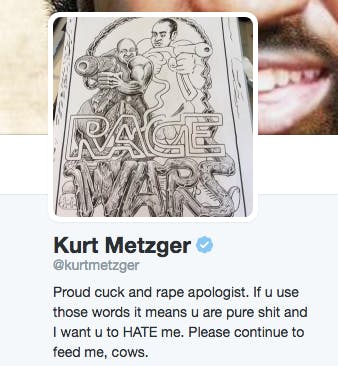 It’s hard to determine what’s motivating Metzger to continue posting, but he seems to be very upset that no women have come forward to publicly tell their stories.

He has also encouraged those who disagree with him to come on his podcast to discuss their opposing views. From the sound of it, though, it likely won’t be a civil conversation. 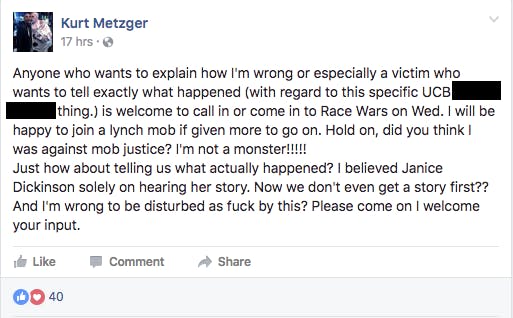 Metzger insisted his comments cannot be construed as victim-blaming.

Oh u thought I was yelling at victims? No I'm talking to silly bloggers and everyone who yelled guilty without even hearing A STORY.

But whatever his intention, his messaging was vitriolic.

It's a pleasure to be a hindrance of any kind to your worthless fake justice.

Instead of leading victims to the police like you're supposed to, u lead them up your own asses.

Really? I am "keeping women from being taken seriously?" Not u with the orange idiot Betty Page hair calling this "the year of our Goddess?"

Did u think this bullshit isn't gonna get Trump elected? Fuck I'm considering changing my vote just to help ruin the world u wanna create.

The world where u have zero responsibility to do the right thing fucking ever as payback for oppression.

And it's always a phony with phony colored hair and mediocre tattoos trying to phony her will into reality. Like u give a shit about victims

Many fans of Amy Schumer were upset by the tweets and Facebook posts and urged Schumer to take note of Metzger’s attitude and to show solidarity.

Hi @amyschumer if you have any words re: your writer Kurt Metzger & his rape apologist ways many women/comedians would really appreciate it!

Hey @amyschumer & co: y'all aware of your writer Kurt's harassment of women? Hope that your team's more than conveniently feminist! #byeKurt

hi @amyschumer every woman comedian i know is more qualified to write for your show than this man https://t.co/zE4vEBro4Y

Hi @amyschumer. He's probably nice to you, but Kurt Metzger is awful to literally every other woman alive. https://t.co/IHxcLBRUbN

At least three women have said Schumer blocked them for their tweets.

Real life: @amyschumer blocked me after I retweeted the rape comments by Kurt Metzger to @ComedyCentral pic.twitter.com/vuMfAElXvq

Liz Arcury, a writer and comedian, told the Daily Dot: “I understand that she must feel bombarded and inconvenienced since her book is coming out today, but she needs to put women first. She had made her name for herself by being a champion of women, and by ignoring us—and literally ‘blocking’ us—she is abandoning what she made such a point to tell everyone that she stands for.”

Arcury added, “I wish Amy Schumer would listen to women. This is one of those classic ‘Well, he’s always been nice to me…’ situations that gaslights victims and women everywhere who are raising their voice. She can use her platform for something great, and instead is abandoning us.”

Update 1:10pm CT, August 17: On early Wednesday afternoon, a day after the tweet storm, Schumer tweeted that she was “saddened and disappointed” in her friend Metzger.

I am so saddened and disappointed in Kurt Metzger. He is my friend and a great writer and I couldn't be more against his recent actions.

Kurt does not work for me. He is not a writer on my show. Please stop asking me about it. His words are not mine.

However, according to IMDb, Metzger is credited as a writer on every episode this past season, and nearly all of the previous ones.

With many people on Twitter calling her out about this discrepancy, this is unlikely the last we’ll hear on the matter.

Update 10:17pm CT, August 17: Once again, Schumer has tweeted about Metzger, clarifying why she said he doesn’t work for her.

I didn't fire Kurt. He isn't a writer for my show because we aren't making the show anymore. There are no writers for it.

#InsideAmySchumer is not cancelled. @ComedyCentral has provided us with a wonderful home and we couldn't be happier there. I am just touring

Doing Standup and focusing on writing more for the next year at least. We are slated for a season 5 but not in the foreseeable future.

I'm grateful @ComedyCentral is giving me this time to work on other projects. Now please grab my book #TheGirlWithTheLowerBackTattoo for now