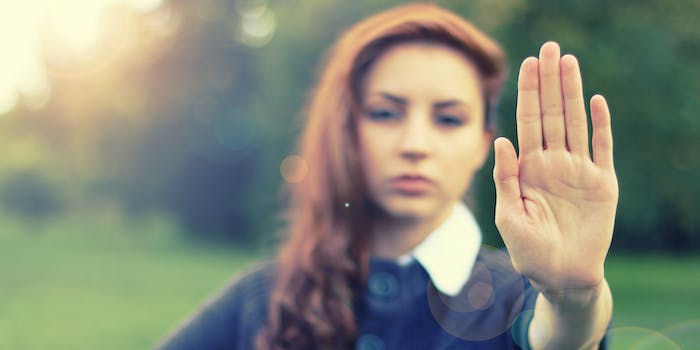 Teen epically shuts down classmate who kept sexually harassing her

'I couldn't get those five words out of my head.'

Forget, “boys will be boys.” Reddit has rallied around one redditor’s story of self-empowerment after a classmate wouldn’t stop sexually harassing her.

On Wednesday, Reddit user bordeauxandboujee, a high school junior, shared how she shut down her harasser, a freshman classmate, after he kept vulgarly asking to perform oral sex on her.

According to the poster, the harassment began two weeks ago while riding the bus home. She was wearing headphones, but the classmate leaned toward her from across the aisle, pulled off her headphones (which is a complete strike three), and whispered in her ear, “Can I eat you out?”

“At first I was simply shocked—I asked him what he said, he repeated the question, and then I told him to never ask me that question again,” she wrote. “I sat on the bus feeling my face and hands grow hot and sweaty. I can’t describe the feeling, but it sucked.”

Flash forward to a week later, when the poster was in art class. Since art is an elective, the class isn’t limited by grade, allowing her and the freshman to be put in the same class together. The poster wrote, she was walking across the classroom to ask her teacher a question and had bent down to pick up something she dropped when she heard snickering.

Turning around, she saw that the freshman and a friend of his were sitting behind her. “Hey, I know I already asked you this question, but can I please eat you out?” he asked her again. But at that moment, her teacher turned around and asked her what her question was. But when she wrapped up her conversation, she was prepared to call him out for harassing her.

“As I talked to my teacher, I couldn’t get those five words out of my head. I felt so angry and upset. I rehearsed my comeback in my head,” the poster wrote. “When I finished talking to my teacher, I leaned over, got uncomfortably close to the kid’s face, and I yelled in my LOUDEST and BRAVEST voice: ‘What the fuck is wrong with you? You’re rude, disrespectful, and disgusting. NEVER ask me that question again. I’ll get you expelled for that shit.'”

The class went quiet, and her teacher pulled her into the hallway for her to explain what happened. Understandably, she broke into tears, after which her teacher sent her to the dean’s office to write up her statement. Fortunately, the administration was apologetic and reassuring, and eventually suspended the freshman.

Over the past day, the post has received more than 40,000 upvotes and tens of comments from other users praising the redditor for her response and taking control of the situation—she’s even received six months of Reddit gold for her admission.

One redditor, puss_parkerswidow, shared a similar story in which a boy handed her a note with a vulgar message when she was in school. Instead of just throwing it away—which she ultimately did—she acted as if she was planning on handing it to the teacher to scare him.

“That’s a memory from 33 years ago. It still feels good,” she wrote. “Good for you. I hope 33 years from now you have good memories of gaining confidence, and standing up for yourself every time it matters.”

Several parents with daughters commended the redditor for standing up for herself, writing they were proud of her and hoped that their daughters could be courageous in the face of harassment when they get older.

“You did great! It’s hard dealing with piece of shit human beings. It’s sad that you (and so many other women) have to deal with men/boys thinking that sexually harassing others is in any way acceptable behavior. I am sorry for that,” one dad commented. “Please continue being a strong assertive woman!”

“As a teen, I never would’ve had the balls to do something like that. I made damn sure my girls do though! Well done to you,” a mom of two girls added. “You’ve showed him its not OK to harass you, and have hopefully spared some other young girls the same torment. Hold your head high, my girl. You have every right to feel proud of yourself right now.”

Redditor bordeauxandboujee did not reply to the Daily Dot’s request for comment.