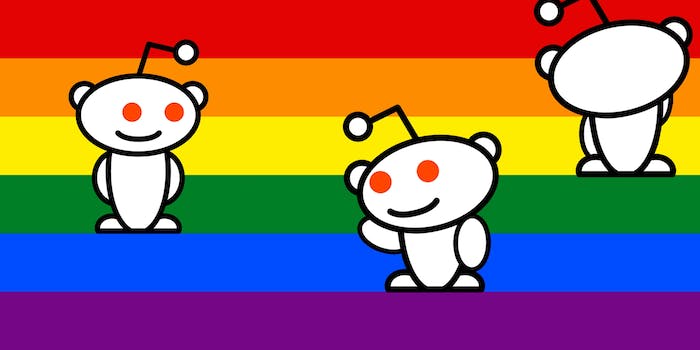 The best gay subreddits: Your guide to Reddit’s LGBT network

Your guide to gaymers, gaybros, LGBTrees, and more. The enormous LGBT network on Reddit will surprise you.

Believe it or not, there’s a gay community on Reddit, and it’s enormous.

Enter the web of LGBTQ subreddits. Roughly two years ago, these niche communities began to spread and prove its members were as varied as their orientations.

“The idea of a single LGBTQ community is quickly becoming an antiquated notion,” says Alex DeLuca, founder of r/gaybros. A forerunner of the gay subreddit scene, DeLuca and his self-proclaimed gaybros aim to strengthen the gay community through diversification. “More gay guys are coming out than ever before, so no one group is going to satisfy everyone,” DeLuca posits.

But how do you find the community for you? How can you navigate every nook and cranny of Reddit’s gay scene? Look no further—we’ve compiled an extensively vetted and organized list of active LGBTQ subreddits that’s sure to please just about anyone.

For those just acquainting themselves with either their sexuality or Reddit, these are great starting points. These subreddits tackle issues facing the larger LGBT community and provide a range of voices on topics.

The experiences of an LGBTQ youth can be unique to their age. Peers can offer perspective, advice, and empathy that’s unique from their elders.

Previously relegated to one Internet lunchroom table, Reddit’s gay community has now blossomed into an entire cafeteria. Pick your interests, take a seat, and get ready to make some new friends.

A process that was once lonely and isolating no longer has to be. A network of resources and support is available to those at risk during a vunerable time.

If not defined by it, Reddit at least revels in the culture of geekdom and nerdiness it fosters. These subreddits are no exception, delighting in everything from tabletop gaming to queer comics and everything in between. Find acceptance and a few cheat codes while you’re at it.

It’s the best of both worlds when it comes to these communities. Though Reddit’s bisexual community might not be as diversified when it comes to indiviual interests, it’s still plenty strong.

Girls who like girls who like Reddit is the name of the game. Whether it’s literature, faith, or fashion, you can appreciate the finer things in life with your sisters at your side.

Perhaps most surprising is the expansive and active trans subreddit community. You’ll find vast resources, counseling, and experience for those at all stages of transitioning.

Check your biological privilege at the door, because fashion and feeling good are the only things that matter here. Get style advice from a group that spans the entire world so you can get on your way to looking your best!

Who says gender or attraction has to be defined by narrow paramaters? These Reddit communities aren’t just places of acceptance, but also thought, discourse, and education. When it comes to discovering how you relate to society through mental and physical gender, this is where you want to be.