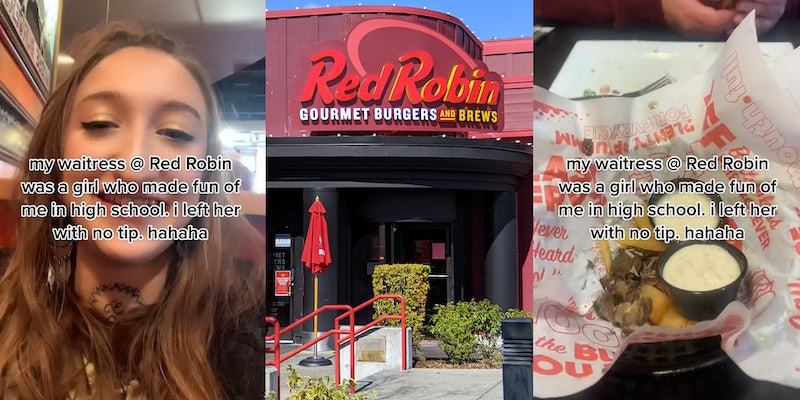 ‘Only time we are okay with the no tip option’: Customer brags about not tipping Red Robin waitress who was mean to her in high school, sparking debate

'There is a good chance she’s a different person now.'

Running into someone you went to high school with after the fact can often be an awkward experience, especially if they aren’t someone you got along with. But one TikToker turned a potentially uncomfortable situation into a chance for some petty revenge.

TikTok user @teeenymaria was grabbing a meal at Red Robin when she discovered her waitress was not only one of her former classmates, but also someone she says made fun of her in school.

The video shows @teeenymaria grinning at the camera before it pans around the table to show the leftovers of her meal. The video’s text overlay reveals how the TikToker handled the unfortunate run-in.

TikTok viewers are frequently all but ready to go to war over someone being a bad tipper, but @teeenymaria may have encountered the one loophole.

“As a server who lives on tips, I support this,” a second commented.

“Done this!” another wrote. “She even tried to tell me she remembers me from HS and I acted like I didn’t remember her but I did and she made my life hell. Loved it!!”

Others had their own ideas for even better revenge, ranging from “complaining and sending stuff back” to actually leaving a particularly big tip to make the former bully feel bad.

“Nah man just shows she got to you,” one user said. “Power move is big tip and act like you don’t even know who she is… You’re better and moved on.”

But a few weren’t on board with the pettiness at all, with one commenter suggesting, “If high school was like 2-3 years ago, I understand that. If it’s been longer than that then there is a good chance she’s a different person now.”

However, the top response to that comment hilariously countered by pointing out that “that’s what all the bullies say.”

The Daily Dot reached out to @teeenymaria via TikTok comment.