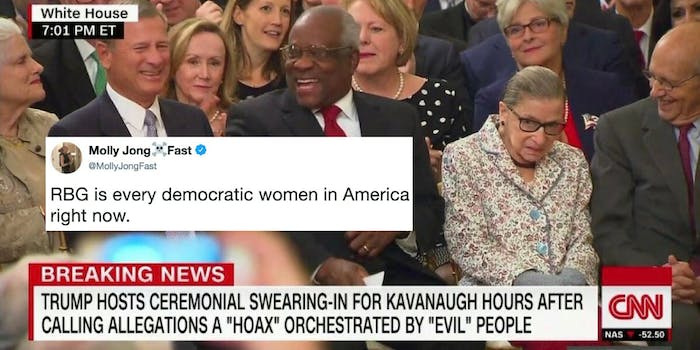 The Notorious RBG is at it again.

It’s almost hard to believe that Brett Kavanaugh‘s confirmation to the Supreme Court was only roadblocked for less than a month before the Senate voted to confirm his nomination on Saturday. It feels like Christine Blasey Ford came forward months ago to describe what she characterized as an attempted rape carried out by Kavanaugh and a friend of his, Mark Judge, when they were in high school. The past three weeks have aged us all.

But even though multiple women have come forward to say that Kavanaugh committed acts of sexual impropriety toward them—and his chaotic confirmation hearing ended in an FBI investigation that didn’t include interviews with Kavanaugh or Ford—President Donald Trump‘s swore-in his pick to the court on Monday night.

However, it appears that Supreme Court Justice Ruth Bader Ginsburg wasn’t going to let his swearing-in happen without her final dissent. Ginsburg, no stranger to fandom and meme celebrity herself, seems to have become a last act of “resistance” for women on Kavanaugh’s way onto the court, her striking side-eye contrasting deeply from the men seen laughing alongside her.

RBG is every democratic women in America right now. pic.twitter.com/JV0U610M1n

It seems that others picked up Ginsburg’s disapproving demeanor, too, making her the perfect reactionary meme to the last leg of Kavanaugh’s challenged but fairly protected journey onto the Supreme Court.

RBG at Kavanaugh's swearing in is a BIG OL' MOOD pic.twitter.com/v6NAf3WGT2

Poor RBG having deal with this belligerent misogynist. https://t.co/BQNkZV62pU

RBG looks like she is literally cringing. As all decent people are at this new Kavanaugh lie.https://t.co/xLoKVQQ5np

Was I the only one waiting for RBG to melt Kavanaugh with her eye lasers? She can do that, right?

Woman rising to the occasion. Not so much the men. #resist #kavanaugh #thisisserious #RBG #trumpiscrazy pic.twitter.com/TR4PQykyYS

Others thought that RBG could’ve gone so far as to melt Kavanaugh with her glare, bordering on a thousand-yard stare.

RBG at the Kavanaugh swearing-in is the face your mom made when she said, “I’m not even mad. I’m just really disappointed. I thought I raised you better than that.” pic.twitter.com/Rm4kca78Yw

Was I the only one waiting for RBG to melt Kavanaugh with her eye lasers? She can do that, right?

I would kill to see RBG's glare today when Kavanaugh takes his seat.

If nothing else, I hope RBG trolls the fuck out of Kavanaugh every single day.

"Welcome to your first day, Brett, have a beer. You like beer, right?"

"Did you Mark this down on your calendar?"

"Hey, Brett, have you seen that email I printed out? I can't seem to find it."

And some noted, instead, that Ginsburg didn’t exhibit “much emotion” at the swearing-in. What—did you want her to smile or something?

RBG not showing much emotion at this Kavanaugh swearing in. pic.twitter.com/5dBmDyCAXF

Kavanaugh might be a Supreme Court justice, but at least the Democrats still have Ginsburg to put up a fight.