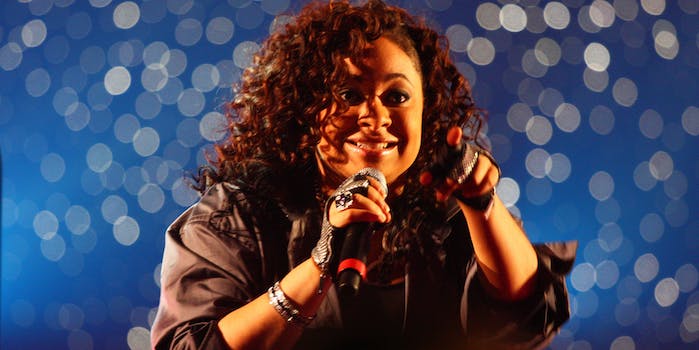 Raven-Symoné comes out on Twitter: “I can finally get married!”

"I can finally get married! Yay government! So proud of you," the star tweeted.

If you’re a child of the 2000s, then you know that while it came in for its fair share of laughs, the Disney Channel hit That’s So Raven was actually a late-edition homage to ’90’s girl-power and coming-of-age narratives laced with awesome.

Today, star Raven-Symoné proved she still had all the class and positivity of her eponymously named character, when she came out of the closet—on Twitter.

Symoné made it clear her long-rumored sexuality was no big deal when she unexpectedly sent a message of praise to the recent Supreme Court ruling overturning the Defense of Marriage Act. Symoné exclaimed to her half a million Twitter followers that the DOMA ruling had affected her personally:

I can finally get married! Yay government! So proud of you

Symoné has long been a vocal supporter of gay rights, participating in California’s #No H8 campaign against Proposition 8, which was also invalidated by the Supreme Court’s historic ruling. But until now, the support has been theoretical; the last time Symoné took to Twitter to discuss her personal life, it was to remind everyone that who she dated was no one’s business but her own.

Naturally, Twitter greeted the news with support and congratulations for the newly uncloseted actress, who’s been a part of the pop culture landscape since she debuted on The Cosby Show as the adorable Olivia. And, of course, the moment gave some fans the opportunity to achieve epic win with tweets like these:

That was so Braven of Raven to come out Gayven.

The news comes on the heels of speculation that the 27-year-old Symoné was back “on” in an on-again, off-again involvement with model and actress AzMarie Livingston. But don’t look for Symoné to announce her engagement any time soon; a representative for the actress explained to E! Online  that Symone was just reacting in delight to the news that Rhode Island and Minnesota both legalized gay marriage this week.

“I, however am not currently getting married,” she told the magazine, “but it is great to know I can.”