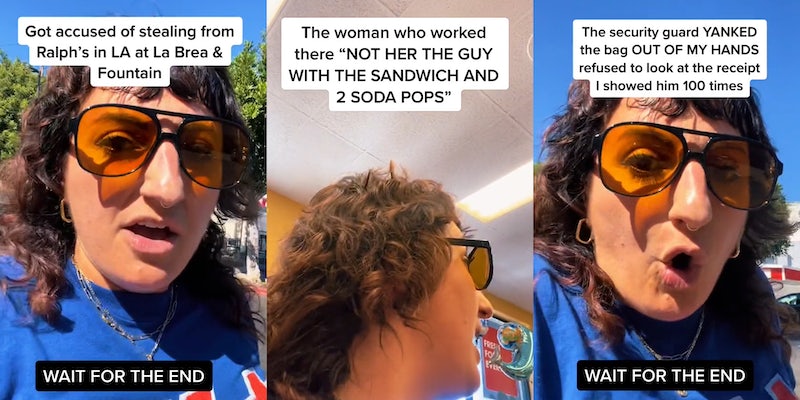 ‘Why do people even snitch about shoplifting like they make commission on it’: Woman wrongly accused of shoplifting sparks self-checkout and stealing discourse

'A good security worker checks the receipt and double checks the person they need to follow.'

Comedian and TikTok creator Steph Tolev shared footage of her treatment at the hands of a Ralphs security guard who wrongly identified her as a shoplifter, and viewers have plenty of opinions about it.

The footage shows Tolev being escorted by a security guard back into the Ralphs location from the parking lot. Tolev explains that she’s recording because he refused to look at her receipt or in her bag before marching her back into the store.

“Would have taken 6 seconds to say, ‘May I see your bag and receipt? … Looks good. Sorry for the interruption. Have a great day!'” one viewer commented.

Tolev responded, “I took my receipt out the second he called me a THEIF and took the bag out of my hands.”

Once the creator gets inside however the cashier exclaims, “Not her! The guy with the sandwich and two soda pops!” The cashier noted that the security guard had grabbed the wrong person, as Tolev with her bag of peppers and oat milk clearly did not match the description.

People were shocked by the security guard’s apparent incompetence as well as the power trip he seemed to be on, with one commenter asking “why is he walking like he’s escorting the president?”

“That’s a guy on a power trip,” another viewer wrote. “A good security worker checks the receipt and double checks the person they need to follow.”

Some blamed the incident on Tolev having used self-checkout, referencing lawyer and TikToker Carrie Jernigan’s (@carriejernigan1) videos on the risk of wrongful arrest, false imprisonment, and significant legal fees that may arise when using self-checkout.

Jernigan later made a follow-up engaging with Tolev’s video, explaining the actions of the security guard and how best to handle the situation should her viewers find themselves in it.

Tolev also followed up her original video with a stitch in which she made impersonated the real suspect with drawn-on unibrow. “That was the best ham sandwich I ever had!” she jokes.

The incident has sparked debate around the ethics of reporting shoplifting of food and other basic necessities, especially from big corporations. Several viewers argued that, with the rising cost of living and wealth inequality, turning a blind eye to those stealing from big business was the ethical thing to do.

“Why would they care about a damn sandwich and 2 soda pops,” one viewer argued. “People are STARVING out here, but the corporations keep robbing us blind. That’s ok tho.”

“Why do people even snitch about shoplifting like they make commission on it or sum, you are not a hero,” a second added.

“If you see someone stealing food NO YOU DIDN’T. Period,” a third user wrote.

Tolev says she has yet to receive an apology from Ralphs but she’s been clear about one thing—she won’t be shopping there again.

The Daily Dot has reached out to Tolev and Jernigan via TikTok comment.