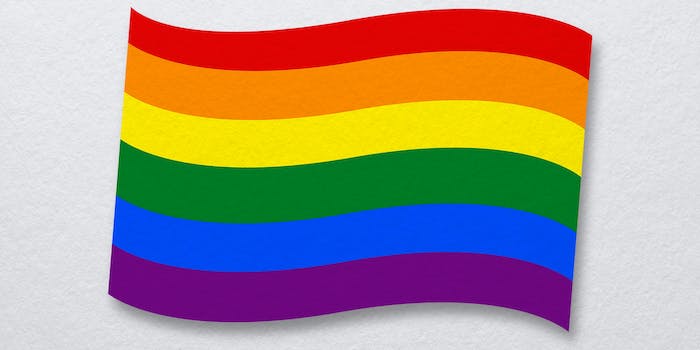 Pride emoji may be coming to a device near you

A new emoji may be coming to an electronic device near you.

According to Buzzfeed, Google employee Mark Davis submitted a formal proposal to Unicode Consortium—the organization in charge of overseeing new emojis—asking for a rainbow flag emoji.

Because the hack is supposedly quick and easy, Davis—who is also a co-founder of Unicode and its current president–suggests the changes be made before the next emoji update.

The method involves utilizing a combination of existing flag emojis and rainbow characters.

“Because existing Unicode characters are used, vendors can begin design and implementation work now and can deploy before the end of 2016, rather than waiting for Unicode v10.0 to come out in June of 2017,” the document reads.

The idea for the rainbow flag emoji was first conceived and brought forth to the Unicode Consortium in June 2015—after the Supreme Court made gay marriage legal in all 50 states. According to the original proposal, those fighting for the addition of the rainbow flag wanted it because it’s a “powerful and potent symbol of not only current gay rights struggles, but the history of gay rights in America.”

“The flag is in the public domain, so it certainly isn’t being held up by copyright issues,” the 2015 proposal reads. “And the current range of rainbow-related emoji show that the technology to jam all those colors distinctly into a very tiny space is available. Numerous national flags have been emojified. And given that the flag has recently been added to the Museum of Modern Art’s design collection, everyone is in agreement about its ongoing cultural significance. So what gives?”

Unicode has shown they’re open to change; an encouraging sign for Davis and others advocating for a pride emoji.

According to Mashable, even if the proposal for a rainbow flag is accepted, it would still be up to Apple, Google, and others to add it to their emoji offerings.

As of now, however, there’s no telling when or if the new emoji will be accepted.