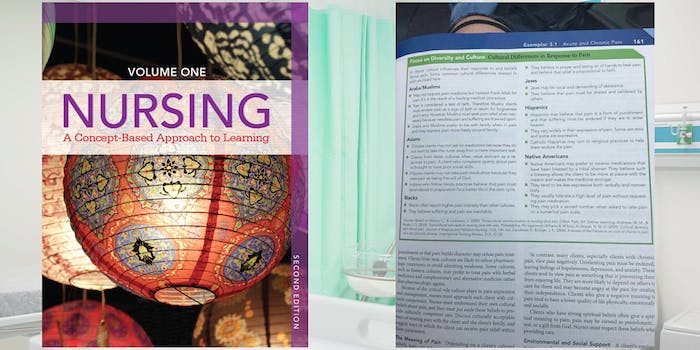 The book says Jewish patients 'may be vocal and demanding of assistance.'

Every patient seeking medical treatment comes with a different set of cultural and personal experiences, which means every person has a different relationship to pain and trauma. Now a nursing book has been pulled for trying to narrowly lump those experiences together and perpetuate racist stereotypes.

The textbook, called Nursing: A Concept-Based Approach to Learning, was published in 2015 by Pearson Education and received criticism early on for its contradictory information and reliance on questionable research. But the book only went viral recently, after internet users found its “Focus on Diversity and Culture” section, where it lists different reactions that minorities may have to pain and reducing Muslim, Asian, Black, Jewish, Latino, and Native American patients to insulting stereotypes.

For instance, under the headline “Jews,” the book says Jewish patients “may be vocal and demanding of assistance” and that Jewish people “believe the pain must be shared and validated by others.” Meanwhile, the textbook insists Black patients “believe suffering and pain are inevitable” and “often report higher pain intensity than other cultures.” The book even suggests Black patients “believe in prayer” and “believe the relief is proportional to faith.”

Of course, none of these claims are accurate. They each draw on stereotypical depictions of Black and Jewish people in order to reinforce generalizations to nurses. Readers across Amazon have condemned the book, while Twitter users point out its insidious effects.

“I am shocked & dismayed to see a page from inside this book that is extremely racist, antisemitic, & not even factually accurate,” one Amazon user wrote, giving the book a one-star review. “This book should cease to be printed. The fact that this is taught in schools makes me quite literally sick.”

Another reviewer points out that the information in the textbook could cause distress to patients, and that following its advice could end in legal action.

“This book is racist and if you apply [its] concepts you will hurt your patients and possibly get in some uncomfortable situations or even litigation,” the review states.

Even crazier: @pearson literally using this excerpt to *advertise the textbook* https://t.co/5i2xlwpQJ5 pic.twitter.com/GPbYGfieFn

I legit want to hold this book in my hands and verify this is real. Because it’s INSANE.

No wonder black patients have such dismal rates of having their pain managed. Nurses taught they just *say* it's more intense. https://t.co/PxR6ixHfbz

this "minorities want to feel pain" reads like "deny them pain medication" or "double dose them with opiates" and both are terrible https://t.co/PFbobBdpyl

Pearson has since been notified about the textbook’s content, causing the company to pull the title from publication. The publisher has also apologized, thanking readers and concerned people for giving feedback about the textbook.

We have been notified of offensive content in a Nursing textbook. We are removing this content from publication.

We apologize for the offense this has caused and appreciate the concern and feedback we have received.

However, some remain upset that the textbook’s racist remarks would even reach classrooms in the first place. Some nurses may have minimal experience working with people from other cultures, races, or ethnicities, meaning Pearson’s textbook could cause lasting harm in the medical community.

Others pointed out that racism remains a common problem in nursing schools, often through textbooks that perpetuate bigoted stereotypes. One Twitter user revealed that his nursing school textbooks taught him to “feed Black patients ‘soul food'” during care. Another claims racist stereotyping appears through “cultural competency” programs.

From my fundamentals of nursing textbook. Shamans for everyone, while the biggest threat to whites is too many vitamins pic.twitter.com/XmxzJ7oYB6

A Pearson Education representative reached out to Bustle earlier this week, apologizing for the text and explaining the steps the company will take going forward to take the racist material out of the book.

“While differences in cultural attitudes towards pain is an important topic in medical programs, the table from this Nursing text did not present the information in an appropriate manner,” the representative told Bustle. “We apologize for the offense this has caused, and we have removed the material in question from current electronic versions and future editions of this text.”