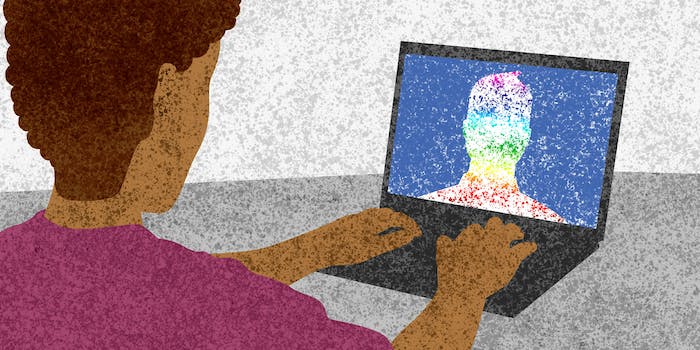 How a Facebook group helped me heal from religious trauma

I am Black, nonbinary, and queer—and the Jehovah's Witness community didn't want me.

In my junior year of college, I decided the teachings and values of the Jehovah’s Witness organization no longer served me. I was coming to terms with many of my intersecting identities—Black, queer, non-binary—and it was clear that the religion was never going to let me accept myself.

When I started college, something that was not encouraged in the organization, I felt extremely alone. All I knew about being queer was what I saw on television, and there was so much I needed to learn not just about the community, but about myself and what it would mean to identify as part of that community. But I didn’t just want to talk to others about coming out; I also wanted to have a connection with people living their lives outside of the organization. This was something I had never known.

I eventually came out to my family and began joining online LGBTQ discussion groups. Shortly after joining a site, someone from my local congregation found my profile and reported me to JW leaders. This led to my ex-communication—meaning I no longer had privileges and rights in the organization, including communicating with family and friends who were still active.

This was the hardest part: Even though I still kept in contact with my immediate family members, I’d lost the sense of community I had built my entire life, a community that added value to my lived experience as a Black person. So I began spending more time in these online groups. They not only gave me space to explore my pain, they provided me with necessary resources on how to begin my healing process.

While Reddit hosts numerous online support communities for religious trauma, some of the most involved and helpful ones can be found on social networking sites like and Tumblr. Search for anything related to “ex JW” on Facebook and you will find numerous groups with multiple people offering the help you need to heal. Some may have a few hundred participants, other have thousands who are helping incoming group members navigate their life post-Watchtower and Bible Tract Society lives. Many offer space for dating advice, post-traumatic stress, and overall wellness.

In fact, such groups are great for queer ex-JWs to unpack what they lost when they leave the organization and also gain certain aspects of their lives back. For Josué, 31, finding an online LGBTQ group that supports ex-JW’s helped him after years of isolation and fear. “I grew up in Nuevo Lardo, Texas, and was always worried that someone was going to find out about me,” he told the Daily Dot.

After coming out only recently to certain members of his family, he eventually used a Facebook group as a way to extend his network when he moved to Southern California. But at first, like many ex-Jehovah’s Witnesses, he wanted to explore other belief systems, saying that prior, he often felt voiceless. “I wasn’t able to talk about things that didn’t relate to being a Jehovah’s Witness. I couldn’t talk about wanting to come out or how to come out,” he said. “Now having the group, I can process my coming out experience without feeling silenced or that I am speaking about something that is taboo.”

He says that growing up as a queer man of color and JW was especially isolating. He rarely got the opportunity to talk about values and issues that aligned with his identity. “I grew up most of my life being bullied for who I was. Being in the group and meeting people in the group was the first time that I felt safe to talk about my gender, race, and sexuality.”

Safety is indeed one of the main reasons people join ex-JW online groups. Molly, 32, who joined the group earlier this year, expressed that she never felt safe enough to talk to people offline about her coming out experience. “I never felt like I could share my story with anyone inside or outside the organization without getting in trouble, really,” she told the Daily Dot.

For her, the group became a safe haven, a place where she could work through some her own pain without the fear of repercussion. “I was homeless for some time after leaving the organization and I dealt with a lot of mental and emotional pain. The religion brainwashes you to believing that anything you experience after you leave is your fault and people who aren’t associated rarely understand what the religion puts you through when you do decide to leave.”

Anna, 35, who too left the organization and joined an online ex-JW Facebook group, agrees. “I find that few people understand what it’s like surviving cult trauma, except for former cultists,” she told the Daily Dot.

Many who’ve come out the other side believe that these ex-JW groups are saving lives. “I was at a very low point before I joined,” Molly said. “People rarely understand the experiences I have and it is amazing to find a space with people that totally get it, where I rarely have to explain my pain.”

As someone who struggled with mental health and past trauma connected to the organization, being in such a group helped me normalize my feelings of isolation and shame. Specifically, it helped me deal with embarrassment that comes with leaving the organization, a feeling that is often heightened during certain times of the year.

For many ex-JWs, the Thanksgiving and Christmas seasons can be especially tough when you don’t have direct communication with your family. Even if we no longer celebrate these holidays, when the day strikes, it reminds us of our loss. Being in online support groups has allowed me to create a network of chosen family and friends who can often provide me words of encouragement when I feel like a disgrace or a disappointment to the family I grew up with.

But that doesn’t mean that groups like these are always uplifting for everyone. Before joining, those questioning their faith and feeling invalidated by it may want to think about a few things. “Consider that not everyone in the group is going to think like you or be on the same journey that you are on,” Josué says. “You have to ask yourself, ‘What am I here for?’”

Though Josué went on to express that while much of his experience in the group has been positive, he has experienced some triggering moments. “There have been times where people have shared a story or asked a question that brought me back to my dark times. I have to be cautious of that.”

Then there is the notion of placing too much trust in the group. “You never know who you are talking to in these groups,” Josué says. “Make sure that before you disclose personal information about your journey, you have an idea as to who you are disclosing it to.”

Ultimately, you should go into ex-member support groups with an open mind, while understanding that these groups should be used as tools, not full resolutions, to overcoming your experience of what you left behind and hope to gain.

It’s been over eight years since I joined my first online ex-JW group. I don’t visit as much as I used to because I better understand myself and my experience—and that’s thanks to these groups. Every once in a while, though, I stop by to remind myself that there are others out there who know and understand my journey. I am happy to see there is life beyond coping.