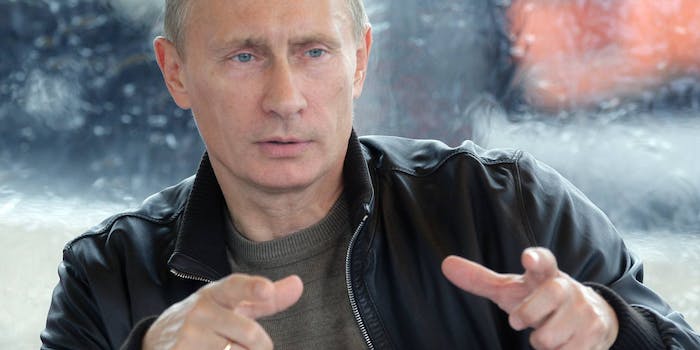 The Russian president never has bad days because he doesn't menstruate.

Oliver Stone’s interview series The Putin Interviews launches June 12, and anyone who’s previewed the work, including the Daily Beast, has noted the Russian president has some pretty misogynistic, homophobic, and ignorant views when it comes to living the modern world.

For starters, Putin said he never has a bad day because he doesn’t menstruate.

“I’m not a woman so I don’t have bad days,” Putin told Oliver Stone. “There are certain natural cycles which men probably have as well, just less manifested. We are all human beings. It’s normal. But you should never lose control.”

In other words, Putin believes that men have more control over their emotions than women because women’s “certain natural cycles” cause them to become emotional.

Stone also asked whether he would “have a problem” showering next to a gay man in a submarine. “Well, I prefer not to go to shower with him,” Putin said, laughing. “Why provoke him? But you know, I’m a judo master and a SAMBO master as well.”

Putin instead believes that he should be a model for so-called traditional values in the country, arguing that since gay marriage “will not produce any children,” he shouldn’t embrace gay rights.

“And I can tell you this, that as head of state today, I believe it’s my duty to uphold traditional values and family values,” Putin continued. “But why? Because same-sex marriages will not produce any children. God has decided, and we have to care about birth rates in our country. We have to reinforce families. But that doesn’t mean that there should be any persecutions against anyone.”

Putin’s last comment comes in the wake of the news that Chechnya is persecuting the region’s gay population, torturing and killing gay men in alleged concentration camps. The order reportedly came from Chechen leader Ramzan Kadyrov, one of Putin’s closest confidants. Many citizens are leaving Russia in fear that the Chechen government will track them down and kill them.

In between some of the Russian president’s more “bonkers” beliefs, as the Daily Beast puts it, Stone does talk to Putin about Russia’s views on NATO and the United States. Putin calls American whistleblower Edward Snowden “courageous” throughout the interview, and claims that Snowden didn’t betray his country by leaking NSA documents.

“Snowden is not a traitor. He didn’t betray the interests of his country,” Putin tells Stone. “Nor did he transfer any information to any other country which would have been pernicious to his own country or to his own people. The only thing Snowden does he does publicly.”

The Putin Interviews launches on Showtime between June 12–15 as a four-part series.