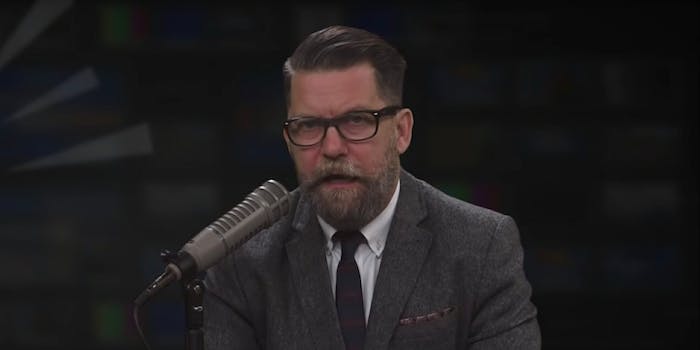 The land down under denied Gavin McInnes’ visa, following a petition that received more than 80,000 signatures.

Gavin McInnes, the founder of the far-right group Proud Boys, has been denied an Australian visa after failing his “character test.”

McInnes was supposed to go to Australia for a tour of the Deplorables, a conservative comedy series, with British right-wing activist Tommy Robinson.

“Over half our support in recent months has come from Australia. We’re coming to say ‘thank you,’” the tour website reads. The tour is scheduled to be from Feb. 1 to Feb. 10.

Sydney-based SBS News reported last week that protesters demonstrated in the Australian capital Canberra to demand that McInnes’ visa be canceled. But a later report claimed his visa application was rejected. It is not clear if McInnes had a visa approved initially.

The Australian Broadcasting Company reported that McInnes had been notified a few weeks ago that his visa would be blocked, and his window to file for an appeal closed on Friday.

A petition calling the Immigration Minister to ban McInnes received more than 80,000 signatures from organizers in Australia.

“More than 80,000 Australians … refuse to turn a blind eye to this clear record of violence incitement, and the violence of the Proud Boys,” petition organizer Nyadol Nyuon said.

The Department of Home Affairs confirmed with SBS News that his visa was denied on the basis of a character test.

“All non-citizens entering Australia must meet the character requirements set out in the Migration Act 1958 (the Act), prior to the grant of any visa,” SBS News quoted the statement as saying. “For visitors who may hold controversial views, any risk they may pose will be balanced against Australia’s well-established freedom of speech and freedom of beliefs, amongst other relevant considerations.”

McInnes founded Proud Boys, which identifies itself as “the world’s greatest fraternal organization” in 2016, ahead of the presidential elections. He severed ties with the organization last month, announcing his decision in a 40-minute long YouTube video blaming the new favorite scapegoat of the far-right—journalism (or, as he called it, “lazy journalism”). He made his announcement a day after the  FBI labeled Proud Boys “an extremist group with ties to white nationalism.”