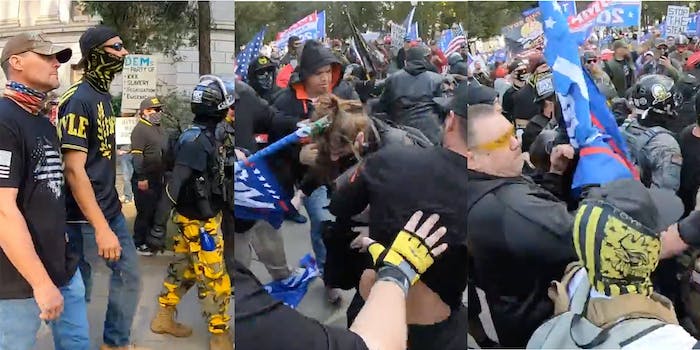 The incident is part of four straight weeks of Proud Boys activity in California's capital.

Video of a group of Proud Boys beating up a lone woman, captured during a Nov. 21 protest gone bad in Sacramento, has resurfaced on a number of Reddit subreddits yesterday and today.

The most recent posting, on r/ActualPublicFreakouts, appears to excerpt video taken by a Sacramento Bee photojournalist on Nov. 21. The video, starting at the 1:30 mark and ending around the 2:15 mark, documents a group of men, some clearly in Proud Boys regalia, with one carrying a Proud Boys flag involved in violence at a protest involving Trump supports expressing their disagreement with the 2020 election results.

The video shows some of the men approaching a lone woman from behind, with several of them punching her in the ensuing melee. Eventually, police come in to break up the conflict. The Bee’s account of the incident between Proud Boys and counter-demonstrators at Cesar Chavez Plaza, accompanying the video, remarked that police “declared an unlawful assembly and dispersed both groups.”

The Bee’s video is not the only online attempt to document the far-right group’s activities at recent protests in California’s capital. Two different Twitter users took to the platform with threads claiming to document the Nov. 21 protest.

And this past weekend, Proud Boys were once again active in Sacramento. A story from the Jewish News of Northern California noted that Proud Boys were involved in Trump-related rallies for a fourth straight weekend.

Its coverage noted that some Proud Boys members were “wearing bulletproof vests and armed with knives” as they “marched through the streets of Sacramento on Saturday in a show of force, blasting loud music and chanting while attempting to provoke counterprotesters.”

Labeling them “a loose network of self-styled “Western chauvinists” that the Anti-Defamation League describes as a right-wing extremist group,” the article notes that Saturday’s protests involved Proud Boys “chanting ‘Whose streets? Our streets!’ and ‘F*ck antifa!’ while butting up against police cordons that blocked their path. The demonstrators exchanged insults and threats with roughly a dozen people identified as part of antifa, a loose connection of anti-fascist activists, often shouting across police blockades.”

The story included a tweet from the publication’s news editor Gabe Stutman, with video capturing the Proud Boys in action.

The article also noted the group is planning an action this coming Saturday.