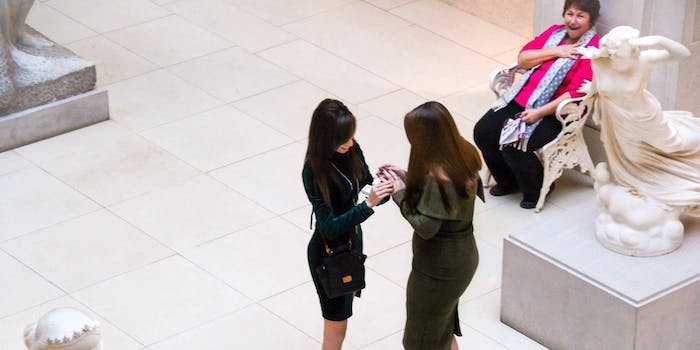 Woman’s gleeful reaction to this proposal breaks the internet

The Internet is going crazy over this woman’s reaction to a proposal that happened right in front of her. Over the weekend, Jessica Rodriguez proposed to her girlfriend Chelsea Miller at the Art Institute of Chicago, and a photo of the incident caught an onlooker’s delighted reaction. Though honestly, if you don’t look like this when you see a successful proposal there’s something wrong with you.

Everything about this photo FTW. #LoveIsLove Congratulations to your sister and her GF @AreYouShook https://t.co/F45DE74PuG

Commenters fawned over the delight of the “old” woman (she looks 55, tops), probably because at the face of an administration that continues to amass a team of anti-LGBT politicians, public declarations of same-sex love and any appreciation they get feel particularly special. That’s where we are: Being happy that other people are happy is a viral-able occurrence.

Since we went viral, can I meet @POTUS now? 😍❤️ #iwasatyourinaguration #freezing

Or how about having SC Justice Ginsburg marry me? No? Okay #lawgeekdreams #RBG