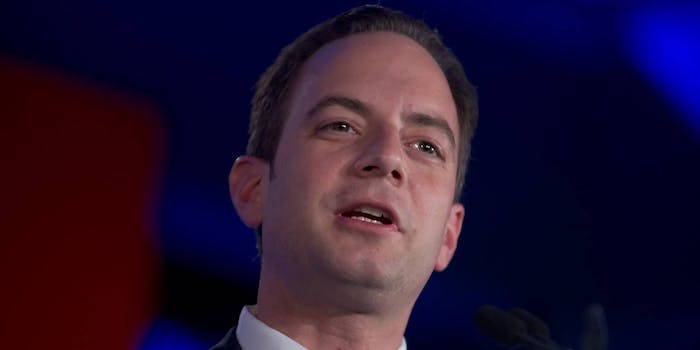 Reince Priebus once again has to answer for the Trump campaign.

Republican National Committee chairman Reince Priebus sat down for an interview with Chuck Todd on Sunday morning, on NBC News’ venerable, decades-old politics program Meet The Press. And, amid a couple of weeks of startling developments in the Donald J. Trump presidential campaign, he had plenty of things to talk about, some of which twisted him into knots — specifically on immigration, birthright citizenship, and the nominee’s attitude towards racial minorities.

Priebus is no stranger to the Sunday morning show circuit, as the head of his party since 2011. But it’s fair to say he’s never had to negotiate as many twists, turns, and utterly chaotic circumstances as he has since Trump became the nominee. Going on-the-record about what a completely unpredictable candidate might or should do, simply put, is a tricky place to be.

Todd got right to the meat of the week of Trump news, asking Priebus about Trump’s recent softening of his immigration plan. For more than a year, the candidate’s plan was very clear: he wanted all undocumented immigrants living in the United States (a population widely estimated at 11 million people) to be deported, by way of a “deportation force,” and he mocked and lambasted his GOP primary rivals for failing to be so muscular on the issue.

He has now set a course for the biggest, most stark flip-flop of his campaign. This week, Trump suggested that long-term, law-abiding undocumented immigrants wouldn’t be deported, and that it’d be the “criminal” immigrants he’d focus on kicking out.

This flip-flop has been accepted by many of his supporters, although some of his base of immigration hardliners have got to be reeling from the reversal. Todd asked Priebus to answer for that, citing his prediction in July that Trump would begin to moderate himself on immigration. Understandably, Priebus was asked when Trump’s full policy would be revealed and what it entails.

Priebus said that Trump would be revealing that himself during an upcoming speech sometime in the future, which seemed to rankle Todd a little bit: “We don’t know? That is sort of remarkable, we don’t know?” Here’s what Priebus was willing to venture, although he was clearly wary of saying anything too definitive, given that Trump might blow past it at a later date:

Todd interrupted Priebus, asking what exactly that “criminal” description entailed, and pointed out that some believe being an undocumented immigrant makes you a criminal on its own. Thus, Trump could be moderating his tone through semantics while still planning some manner of mass deportation of the 11 million. Priebus once again didn’t want to get specific, deferring to that clarity-providing Trump speech that always seems to be a week or so away.

“Those are the things that Donald Trump is going to answer, and this is not obviously a simple question,” Priebus maintained. “These are not simple issues.”

Though crafting a comprehensive policy is certainly complex, Todd pointed out that Trump hasn’t always appeared to take that into consideration; the GOP nominee could be accused of “over-simplifying” the immigration issue throughout his primary campaign. As much as Priebus seemed reluctant to offer any criticism or personal opinion of his party’s standard-bearer, he had to give it up on that one, admitting “he did, he did simplify it.”

But he said further that Trump would be a “law and order president” who’d be “tougher on immigration” than any other candidate the party could’ve chosen. He also disputed the idea that Trump’s plan is now similar to loathed ex-rivals like Marco Rubio and Jeb Bush, although a comparative look at the plans is pretty startling.

Priebus also refused to speculate whether Trump would call for an end to birthright citizenship, and, despite being personally “comfortable” with it, he wouldn’t even approach offering any advice on the issue:

Priebus went on to insist that he knows Trump personally, and that he’s a “good and decent man,” which was practically a line pulled out of the Mike Pence playbook.

On the whole, Todd’s grilling of Priebus on the specifics—or lack thereof—of Trump’s immigration plan laid the situation bare: he didn’t seem comfortable making any definitive statement about where Trump’s plan will ultimately land, which makes sense considering his recent, wild rhetorical swings.

Todd asked Priebus whether he agree with Trump calling Democratic nominee Hillary Clinton a  “bigot,” and the RNC chairman demurred, saying “those aren’t my words” before praising Trump’s record on women and racial minorities.

This tee’d up Todd’s next question perfectly: What about the housing discrimination?

Specifically, he cited a recent story by The New York Times about how Trump and his father, real estate developer Fred Trump, were investigated for keeping black tenants out of their properties in the ’60s and ’70s. According to the Times report, in 1967 a mere seven out of about 3,700 Trump-owned rental properties were occupied by black tenants.

To say Priebus wasn’t thrilled with this topic of conversation would be an understatement. He barreled in before Todd could even finish the question: “May have done, I mean, this is the issue. Look at what he did do.” Todd pointed out that Trump was under Justice Department investigation, but Priebus continued to insist that he knew where Trump’s heart was:

“Look, if you look at what he’s done as a developer in putting together golf courses, these clubs, the things that he’s been doing for the last several decades, he has broken the mold when it comes to this issue. And I can tell you where his heart’s at, I know where his heart’s at.”

Todd also questioned Priebus about Trump’s widely-panned tweet about Dwyane Wade and his cousin Nykea Aldridge, who was killed as a bystander to a shootout in Chicago on Friday. Trump’s initial tweet, which was subsequently deleted and corrected for spelling was then followed by a conspicuously un-Trumpish condolence tweet more than four hours later. The first tweet as well as its correction made no mention of Aldridge’s name, or offered any expression of regret, instead stating that the shooting showed “African-Americans will VOTE TRUMP!”

Priebus didn’t engage at all directly with the substance of the criticism around Trump’s tweet, pivoting into an argument about the Democratic Party failing voters of color. He also addressed the recent hiring of Trump campaign manager Kellyanne Conway and campaign CEO Steve Bannon, saying he “didn’t know” the controversial Breitbart chief. In recent days, allegations made by Bannon’s ex-wife in their divorce filings have gone public, including accusations of physical abuse and anti-semitism.

All in all, Priebus played it pretty close to his vest this time around, but if things keep going the way they have been, he figures to have some hard choices to make about how the RNC will allocate its resources heading into November.