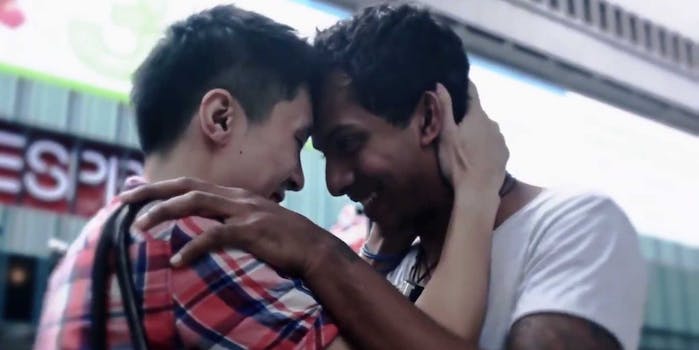 From military partners to public transit pairings, these lovebirds all have something to be proud of.

YouTube wants you to show your pride and be proud to love whoever you want.

The company is highlighting the lesbian, gay, bisexual, and transgender (LGBT) community on its YouTube Spotlight channel as Pride Month comes to an end.

The highlighted programming also comes just one day after the U.S. Supreme Court deemed the Defense of Marriage Act unconstitutional and dismissed the appeal on Proposition 8.

“At YouTube, we’re proud to stand with the LGBT community to support equal rights and marriage equality—we believe that everyone has the right to love and be loved,” Raymond Braun wrote on the official YouTube blog. “Pride Month may be coming to a close, but we hope that YouTube is a place where you can feel proud and build a community all year long.”

YouTube is encouraging content creators to make videos responding to the question “Who, what, or why are you #ProudToLove?” Their own video featured a number of viral coming-out videos and proposals along with appearances from prominent LGBT YouTubers.

While the YouTube #ProudToLove campaign had been in the works for some time, many have been answering that question online for years. In honor of the campaign, we’ve gathered nine examples of our favorite way that people have demonstrated they were proud to love their partner: the over-the-top proposal video.

Naresh hadn’t seen his boyfriend, Clement, in five days before the proposal, but he knew he wanted to spend the rest of his life with him. He stood outside waiting for Clement to show up and silently explained that he loved him despite the annoyances with a giant notepad. He might not have had a ring, but he didn’t need it for Clement to say yes.

The couple was backstage at a Macklemore and Ryan Lewis concert in Omaha, Neb. when the rapper called them on stage. Powell got down on one knee, and the crowd reactions was loud enough the couple could hardly hear each other. They’ve since gotten married, and Rogers launched a Change.org petition to stop Grace University from charging Powell for scholarship money after expelling her for being gay.

One man, who was on military duty, video chatted with his boyfriend, and revealed through a pre-made video that he was willing to quit smoking in order to be with him longer.

Jackie and a number of family and friends dressed up as the Warblers from the TV show Glee and performed the show’s version of “Teenage Dream” to Ann, who was brought to the park with her head covered under the impression it was a birthday celebration. They greeted family and friends as “Rainbow Connection” played before Jackie finally proposed.

Benarroch gathered Fournier and a number of family and friends together for a meal, where he used RedEye columnist Kyra Kyles’s Going Public column to propose, having Fournier read it aloud.

Plenty of people propose during sporting events. This time, Alicia was led to the ice blindfolded before the start of a hockey game where she was greeted with a loving message before her girlfriend Christina came out to meet her. There’s no microphone, but the mascot is on hand to let the crowd know how it went.

Close friends are together when one decides to propose in front of everybody after dating for two years. He doesn’t immediately say yes, but he’s as serious and immediately looks for plane tickets to San Francisco.

Sauter and Viviano, both huge Garbage fans, were brought onstage in the middle of a Garbage concert in Detroit. Singer Shirley Manson explained that Sauter had contacted the band on Facebook and gave him the stage, where he got on one knee. The crowd erupted in cheers.

Carl coordinated a flash mob to dance to Christina Perri’s “A Thousand Years” at Bethesda Fountain in Central Park as Drew watched with Carl’s mother. Once the performers finished, Carl grabbed Drew and proposed as everyone watched.