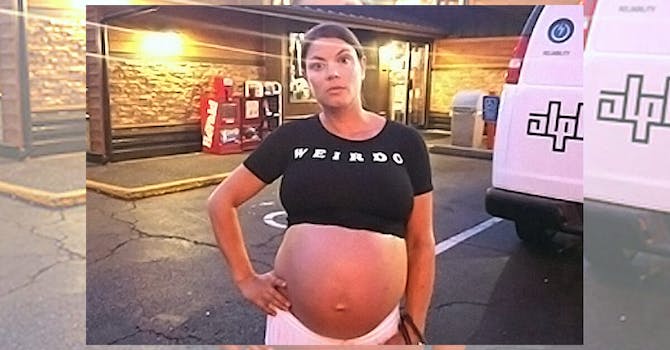 Pregnant woman kicked out of restaurant for wearing crop top

Let the woman be comfortable, will ya?

A pregnant woman says she was kicked out of a Washington steakhouse chain this weekend because she was wearing a crop top.

In a now-deleted Facebook post, Charisha Raylee Gobin wrote that she went to Buzz Inn in Marysville to have dinner with her mother and sister when a server approached her and said the restaurant had “no shoes, no shirt, no service” policy. Gobin was wearing shoes and a shirt. She is also seven-and-a-half months pregnant with twins, which was obvious due to the nature of her crop top that humorously read “weirdo.” The server also allegedly told Gobin that her outfit violated the restaurant’s “health code.”

Angry that she was possibly being shamed for being pregnant (or dressing “inappropriately” for a pregnant woman), Gobin took to Facebook to tell her story, which quickly went viral.

On Monday, Buzz Inn apologized for the “misunderstanding” and said that the server, who has been with the company for nearly 20 years, was just trying to “use her best judgement [sic].”

As compensation, may we suggest a lifetime supply of rib-eyes for Gobin to enjoy while wearing whatever the hell she chooses?