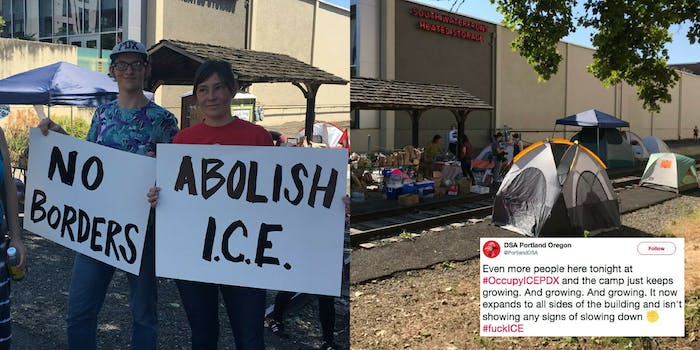 Protesters say they have blocked employees 'from returning home to their families.'

President Donald Trump says he plans on signing an executive order regarding his “zero tolerance” family separation policy at the border. However, what that means remains to be seen, and for the past four days, protesters in Portland, Oregon, have mobilized their own acts of resistance by occupying a local U.S. Immigration and Customs Enforcement (ICE) facility.

According to the Portland Mercury, protesters have camped out outside the local ICE facility on Macadam Avenue since Sunday. The demonstration’s organizers, local Democratic Socialists of America and Direct Action Alliance chapters, say they’re occupying the facility until the Trump administration stops separating immigrant families.

Under Attorney General Jeff Sessions’ “zero tolerance” policy, all adults found entering the U.S. unauthorized will be prosecuted, resulting in families being separated and children taken from their parents who are being charged for federal crimes. International pressure condemning these policies has seemed to have influenced the Department of Homeland Security, which is said today to be drafting an order ending family separation.

Photos and video of the demonstration shared on Twitter show that the protest has swelled to hundreds of supporters, with the demonstration holding down tents, a portable bathroom, and hundreds of donated food items. On Tuesday afternoon, an estimated 50 people were gathered preparing for a candle-lit vigil later that evening, the Portland Tribune reported.

“We don’t want to reform ICE, we want to ABOLISH it. We demand a world that allows for true freedom of movement not based on economic status or ethnic background but because we are all humans.” – @livkittykat #AbolishICE pic.twitter.com/XaEmNu25MY

VIDEO: Minutes ago, DHS police escort people out from inside of the ICE HQ in Portland. #OccupyICEPDX #OccupyICE pic.twitter.com/QMdWG74L9z

Another barricade has been erected to keep vehicles in and out of this lot, I’m told by a protester stationed here.#OccupyICEPDX pic.twitter.com/HYjA1qDiRv

Signs taped around the building and on signage and trees around the area, and held by protesters, promote the abolishment of ICE, the immigration agency tasked with finding, arresting, and detaining undocumented immigrants for eventual deportation across the U.S. ICE is a separate agency under the Department of Homeland Security (DHS) related to U.S. Customs and Border Protection (CBP), the agency that processes undocumented immigrants and immigrants seeking asylum.

According to the Mercury and Raw Story, the protesters have already managed to delay several ICE cars from leaving the facility on both Monday and Tuesday, with at least one person being arrested as a result. Protesters say that the facility has several holding cells and is “currently detaining immigrants.” They also said ICE staffers had told them they were “blocking officers from returning home to their families.”

“They were pretty cranky about it,” protester Hanna Tashjian told the publication. “The irony of them being detained indefinitely in a facility where they can’t go home to their families was kind of lost on them.”

The Tribune reported on Tuesday that in Sheridan, Oregon, an hour south of Portland, 123 asylum seekers from 16 countries have been brought to the Federal Correction Institute, an all-male prison. Protesters have also begun gathering at the center, and attorneys have been denied access to the asylum seekers.

An ICE spokesperson sent the following statement to the Daily Dot, in which it denied that the ICE office on Macadam Avenue currently has people in custody:

“U.S. Immigration and Customs Enforcement (ICE) fully respects the rights of all people to voice their opinion without interference. ICE remains committed to immigration enforcement consistent with federal law and agency policy. The Federal Protective Service was called to the ICE office on Macadam Avenue Tuesday afternoon due to security concerns resulting from the ongoing protests at this location. Questions regarding arrests that took place should be directed to the Federal Protective Service. Currently, ICE does not have any individuals in custody at its office on Macadam Avenue. Individuals in ICE custody, in accordance with agency policy, can only remain at this location for up to 12 hours.”

DSA Portland Oregon did not immediately respond to the Daily Dot’s request for comment.

LIVE: Police in tactical gear have moved in as agents dismantle protesters' makeshift blockade of ICE facility in P… https://t.co/VI28cNzmDl

In a statement released by the “Occupy ICE PDX” movement, the protesters state that their main encampment wasn’t located on federal premises nor blocking access to the facility, though protesters were “chained up” along the front of the building.

“To the movement that is igniting across the country: be alert but be unafraid. We send our solidarity to camps and prisons everywhere. Elevate, center, and follow the voices of those most affected by ICE terror. The security and safety of these folx are the top priority,” the statement reads.