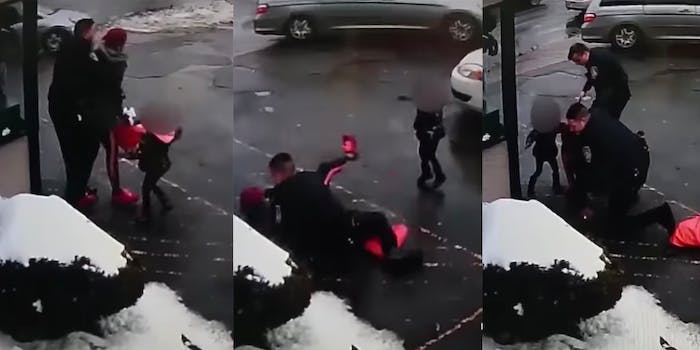 Police accused the woman of stealing from a drug store.

The Rochester Police Department released body camera footage on March 5 that shows a woman being tackled to the ground and pepper sprayed as she reaches for her 3-year-old child’s hand.

An officer received a phone call about potential theft by a woman from a drugstore on Feb. 22, resulting in her arrest and pepper spraying after she ran away from the officer to a nearby storefront.

Two of the officers involved in the incident were also involved when a 9-year-old girl was pepper-sprayed by Rochester police in January.

In the newly released footage, an officer asks the woman what she stole. The woman opens up her purse to show diapers and wipes. “I promise on God I stole nothing,” she says.

After inspecting the bag, the officer asks her to go into the back seat of his car to confirm that she did not steal anything, after which the woman runs to the front door of a store.

“I didn’t do nothing,” the woman says as the officer catches up to her. Another video of released footage shows the woman being thrown to the ground as another officer restrains the child. “Get on the ground now,” the officer says. “You’re under arrest. Stop resisting.”

After putting up a fight and getting pepper-sprayed, the woman is placed into the back of a police car. The officer confronts a bystander who is photographing the incident

“Shut the hell up and get out of here,” the officer says. “I didn’t punch her once. I pepper sprayed her and had her on the ground.”

The Rochester Police Accountability Board hosted a press conference and called for better de-escalation and sensitivity protocols, especially when interacting with Black, Indigenous, and people of color. Board members also demanded the city to provide them body camera footage and training manuals regarding the use of pepper spray and the handling of children during crises.

Another board member, Arlene Brown, said the police should have stopped after the woman opened her purse and showed she had no items from the drugstore.

“It was the officer’s action from then on, that escalated the situation,” Brown said. “Clearly putting the mother and the child in stress.”

Other footage shows an officer trying to console the crying and screaming child. The officer says his name and repeatedly asks for the child’s as she tries to run away from the officer.

The child continues to scream. The officer then asks a colleague to pull their car around and block them from public view. “It doesn’t look good that I have to restrain like a 3-year-old.”

The officer continues to try and pat the child on the back as he waits to confirm that the mother has no weapons. “Hey dear, we’re going to put you with your mom in a second, OK?” he says. The footage ends after showing the child eventually joining her mom in the back seat of the police car.

City Council Chair Rev. Matthew Nickoloff said the board is using its power to push for accountability and said community members should call elected representatives and City Hall to demand change.

“The sooner that we all make it clear that this is something we don’t only want but we expect and we demand as the citizens of this city, the sooner that our elected officials will respond,” Nickoloff said.

The Rochester Police Department did not immediately respond to the Daily Dot’s request for comment.