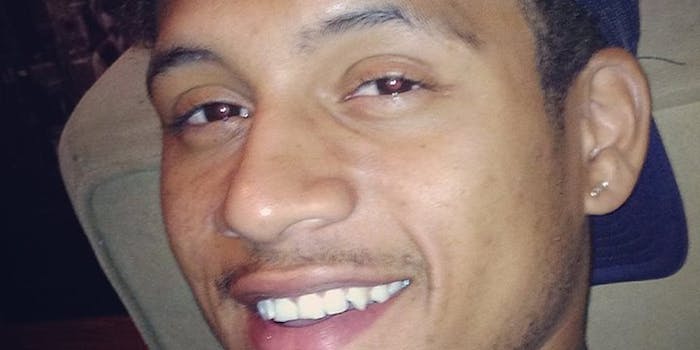 Though #BlackLivesMatter activists were originally spurred to protest by the high-profile deaths of Michael Brown and Eric Garner last year, 2015 has been no less dangerous for African-Americans.

In the past few days alone, police killed a man who allegedly broke a condition of his parole but wasn’t carrying a weapon and fatally shot an unarmed 19-year-old.

Now reports of yet another heartbreaking officer-involved homicide have emerged: 27-year-old Anthony Hill, an Air Force veteran who served in the Middle East and may have suffered from bipolar disorder, was gunned down in an Atlanta-area apartment complex by a Dekalb County cop. Hill was naked and erratic, video evidence shows—crawling on the ground and swinging from balconies—prompting concerned residents to call 911.

#AnthonyHill the unarmed black man killed by the Atlanta police on March 9,2015 was also a US Air Force veteran! http://t.co/WWk2bLQpIB

That Hill was unarmed and in obvious distress has once again galvanized the tireless critics of an American police state disturbingly eager to use lethal force against black suspects. In addition to the enduring #BlackLivesMatter hashtag, they’re hammering a new one: #Antlanta.

@NeilSardana "it is shameful that when citizens in DeKalb need help, they're shot in the heart twice." #Antlanta pic.twitter.com/qVc6arjm42

If a cop doesn't know how to restrain someone without a gun and DEATH, then that cop should be out of the job. RIP #AnthonyHill #Antlanta

naked. in broad daylight. anyone unclear black ppl are automatically guilty for existing by now, i don't know what to tell you #Antlanta

Mourners read through Hill’s revealing Twitter and Facebook feeds, while his girlfriend Bridget asked for support, shared her grief, and turned away requests for comment from the media.

I am thankful to be something other than normal.

I don't fight my circumstance,

I think this twitter account will be dead by the beginning of the week. Take me to the moon and I still won't have enough space.

Psychiatrists along with pharmaceutical companies are creating a class of subhumans. The real walking dead. I've seen the big picture.

The black community needs to work harder to make sure WE know that #blacklivesmatter. Our actions will either support or diminish our words.

Please y'all… Stop calling me. I don't want to talk, ok?

I thought cops were suppose to protect and serve???? THEY TOOK THE LOVE OF MY LIFE AWAY!!!!! #antlanta

Please pray for me and my boyfriends family… I love you #antlanta.

Today was our 3 year anniversary… I love you babe. Rest in paradise. I know you're happy to see your granddad. pic.twitter.com/D9iYj9fW2I

I'm all out of tears. I'm just angry now…

The Georgia Bureau of Investigation will lead a probe into the shooting.