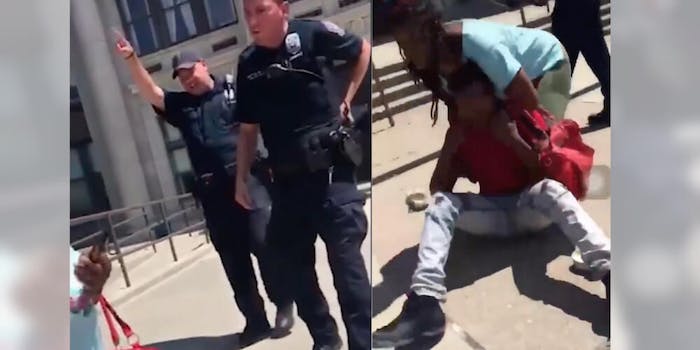 A video of the incident went viral.

A police officer in Indianapolis, Indiana, has reportedly been placed on leave after being caught on camera punching a Black high school student in the face.

On Thursday, Starla Denise-Mcgee Sams shared the video on Facebook, where it has since gone viral.

In the video, which is about 30 seconds long, two police officers with the Indianapolis Metropolitan Police Department can be seen screaming back and forth with a woman, who is out of the camera’s view. According to RTV6, the woman is the mother of one of the juveniles in the video, and the officers were threatening to arrest her for disorderly conduct.

She told RTV6 that she was at Shortridge High School to pick up her son and his cousin because they were “jumped.” She also wanted to pick up their belongings. An Indiana Public School (IPS) official told her she could, while an IMPD officer told her she could not, which is when the verbal altercation ensued.

“Y’all got to chill out, bro. Chill out,” one of the boys says as the other boy steps up to the officer.

IMPD Chief Brian Roach said in a statement that the officer has been suspended without pay and is under investigation.

“The video shows a clear image of a closed fist punch to the face, a technique which is not taught or reasonable given the facts known to us at this time. The incident has been turned over to investigators, who understand this case is a priority and have been advised to be as timely as possible,” he said, per RTV6. “The facts brought forward through the ongoing investigations in both the criminal and administrative processes will then be used to determine any final decisions.”

IPS Superintendent Aleesia Johnson on Friday released a statement on her social media.

“As a black woman and a mother of black children, it isn’t possible to watch the video of the incident that occurred yesterday at Shortridge without immediately thinking about the other incidents in our country that occur between white police officers and black people, especially males,” she wrote, adding that the district “will come together in a number of ways in the coming weeks to support the school-wide culture, with students planning alongside administrators.”

As a black woman and a mother of black children, it isn’t possible to watch the video of the incident that occurred…