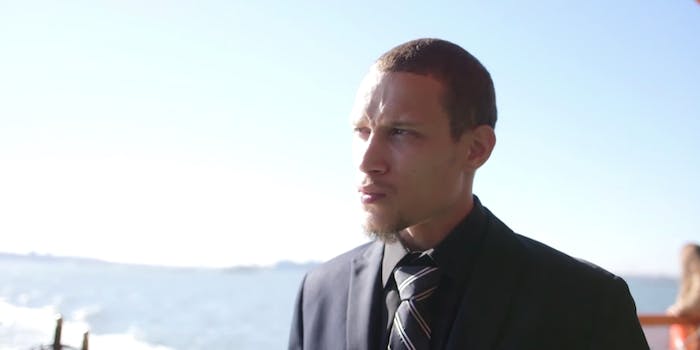 Ramsey Orta has been in prison since 2016.

The police officer who choked Eric Garner, leading to his death, has been fired. Now, people are using the #FreeRamsey hashtag to call for Garner’s friend, who filmed the deadly encounter, to be freed from prison.

Ramsey Orta took the video in 2014, showing NYPD officer Daniel Pantaleo using a prohibited chokehold on Garner and then sitting on him after Garner repeatedly said, “I can’t breathe.” Garner was being arrested for allegedly selling loose cigarettes.

“I can’t breathe” has become a rallying cry for the Black Lives Matter movement. And following the virality of the video, Orta was allegedly harassed by police and eventually arrested on weapons and drug charges. Orta has been in prison since October 2016, where he has allegedly been beaten, threatened, called racist names, and had his food tainted with rat poison at the hands of corrections officers.

In July, the Justice Department ruled it would not bring any charges against officer Pantaleo. On Monday, NYPD fired Pantaleo, with NYPD Commissioner James P. O’Neill calling the decision “extremely difficult.” Following the announcement, people began using the #FreeRamsey hashtag to advocate for his release.

Are they going to Free Ramsey Orta, now that this asshole is fired?

.@NYCMayor you try to put this off on the NYPD. Yet you have the power to Fire Pantaleo & you do nothing. You also have the power to free Ramsey And YOU do nothing! It’s time for you to put up or shut up! #FirePantaleo #FreeRamsey #JusticeForEricGarner https://t.co/DgGwOcwh1z

Yes #FreeRamsey Orta, you ghouls. I mean you, DIBLASIO. https://t.co/WFILWTI65g

Can we #FreeRamseyOrta? He’s being tortured in prison for filming the murder. https://t.co/I1bGxIzbkp

“THIS IS A CITY ALL OUT.

Black people had absolutely enough of the NYPD murdering and terrorizing our people.

Tonight, we commiserate on what got us out in these streets and call for community defense NOW!”#JusticeForEricGarner #FreeRamseyOrta https://t.co/vrh9hhVKyN

Orta has claimed some of the charges that landed him in prison aren’t legitimate. According to an NYPD report, officers claimed they saw Orta stuff a gun down a woman’s pants. The gun they recovered had no bullets, no clip, no fingerprints, and had been reported stolen years prior.

“I’ve been on the streets doing my dirt for a long time,” Orta told the Verge. “So you have to understand how ridiculous this gun charge is. There’s no chance I’m dumb enough to give a girl a gun out in the open like that. The cops had been following me every day since Eric died, shining lights in my house every night. You think I’m walking around with a stolen gun that now they say wasn’t even loaded?”

While Orta didn’t exactly deny the drug charges, he–along with many other activists–maintains the charges against him are retaliatory. The police claimed to have video evidence of his mother aiding him in drug sales, and they arrested her as well. While he has never seen the supposed video evidence, Orta took a plea deal in exchange for his mother’s freedom.

Garner’s death was one of many deaths of Black men at the hands of police that resulted in civil unrest, as the officers involved often faced minimal consequences. Only a few weeks after Garner’s death, Michael Brown, an unarmed Black man, would be shot and killed by officer Darren Wilson in Ferguson, Missouri. A grand jury did not indict Wilson. A year later, officer Timothy Loehmann shot and killed an unarmed black child, Tamir Rice, and was also not indicted.