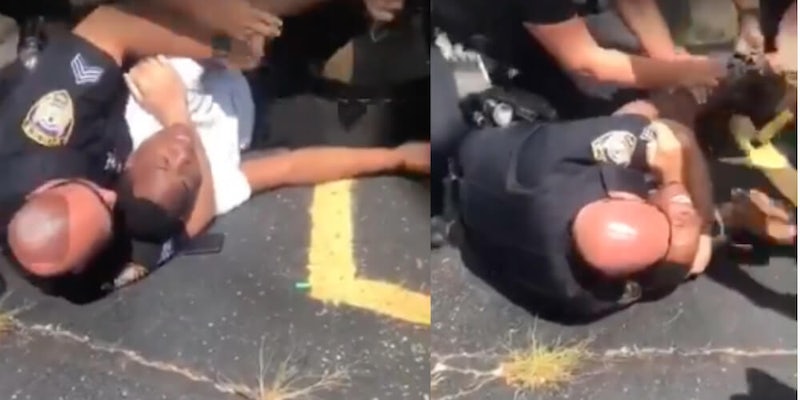 It's against the law for officers to use chokeholds in Illinois unless 'deadly force is justified.'

A now-viral video shows Illinois police officers putting 25-year-old Elonte McDowell in a chokehold and tasing him. The DeKalb Police Department has temporarily reassigned one of the officers to administrative duties while it reviews the incident, according to a statement released by the department.

For you guys to decide. Right or wrong? #DKPD

On Aug. 24, the DeKalb police officers arrested McDowell after the department claims to have received information that McDowell had a “load of drugs” in his car while traveling from city to city. The amount of drugs McDowell had was actually about an ounce of marijuana, according to Heavy. McDowell told a local news outlet that while he should be held accountable for the marijuana he admits he was in possession of, he also wants the officers to be held accountable.

“This is what some police officers do and you have to put a stand on it,” McDowell told the outlet. “It’s not OK. … It needs to get out there. It happened one too many times. This happens every day.”

The alleged informant gave the department details about the car McDowell was driving and his passenger, presumably McDowell’s girlfriend Alyssa Retuerto, who filmed and posted the incident online.

The department claims that as officers were arresting McDowell, he attempted to flee and then continued to resist arrest. It was during this encounter, the department says, that a taser was used to gain McDowell’s–who was already in a chokehold–compliance.

“Oh my God, what the fuck are you doing that for? He’s in a fucking chokehold and you just tased him? For what? For what,” Retuerto says to the officers. “He has a pulse, right? Like, you guys, can make sure that he has a pulse? ’Cause look at his face.”

The department made no mention of the use of a chokehold by police on McDowell, which was seen in the video. In 2015, Illinois passed a law, prohibiting officers from using chokeholds unless “deadly force is justified.”

“I can’t breathe,” McDowell can be heard saying in the video.

The officer who had McDowell in a chokehold can be seen lightly slapping McDowell’s face and saying, “You’re OK big boy. That’s a nice fake.”

The couple has hired a lawyer, according to Heavy.

The police department claims that it is “reviewing all available video footage and statements regarding the use of force in this incident” and asked the Illinois State Police to conduct an independent review.

The Daily Dot has reached out to the DeKalb Police Department and Elonte McDowell.