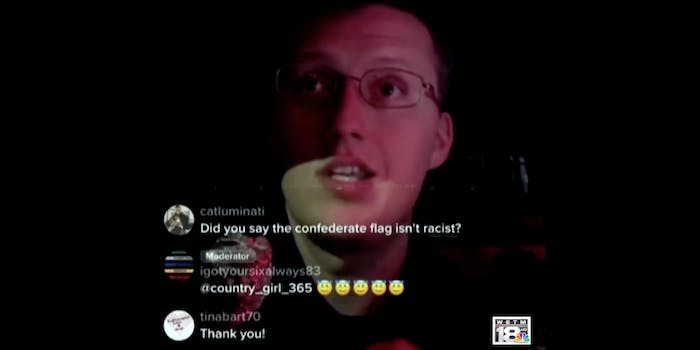 'Technically they fought for slavery, I guess you could say, but again, that’s been over 200 years ago.'

A Pennsylvania police officer has come under fire for filming a pro-Confederate flag TikTok rant while on duty.

Officer Brian Gossert has worked for the Mansfield Borough Police Department since the fall of 2020. He filmed the inflammatory TikTok live stream while in uniform and with a suspect in the back of his patrol car.

The video has since been taken down, but TikTok user @catluminati recorded it in a video of their own. Their video was acquired and shared by WETM 18, a virtual news station serving southern New York and northern Pennsylvania.

“So yeah, technically they fought for slavery, I guess you could say, but again, that’s been over 200 years ago,” Gossert says. “I think it’s time that people just like, get the fuck over themselves. … If the symbolism behind that flag is still that hurtful now, then we should still hate the South.”

Gossert also says that while most people assume police officers are racist, it is actually Democrats revitalizing racism across the United States.

Near the end of the video, Gossert’s rant about the Democratic Party and the Civil War gets cut off as the clip switches to show him in the middle of an arrest. The windows inside the patrol car blur the view of the back seat, but Gossert can be heard talking to the suspect.

Once the suspect is stowed in the back seat, Gossert returns to his still-live TikTok and scoops up his phone. Before the video ends, it shows Gossert standing outside his car and telling the camera, “Fun stuff. This is why you don’t do meth.”

Gossert’s TikTok is no longer active. The Mansfield Borough Police Department responded to backlash in a statement posted to Facebook on Wednesday.

“The Mansfield Borough Council is aware that a borough police officer posted offensive videos on a social media platform which were recorded and posted while he was on duty,” the statement reads. “The Borough Council is appalled and outraged by this conduct. The officer has been suspended and an investigation is proceeding. The views expressed in these videos do not reflect the values of the Borough government.”

Commenters on the department’s Facebook expressed outrage over Gossert’s video. On Reddit’s r/Bad_Cop_No_Donut, where the story migrated, viewers were similarly furious and dragged Gossert for posting his controversial opinions while in uniform and on duty.

“If it’s your heritage to fly it, it’s mine to burn it,” one Redditor wrote.

“He told us to ‘read a book’ multiple times in this video, but you can tell that fuck-nugget has never read a history book,” said another.