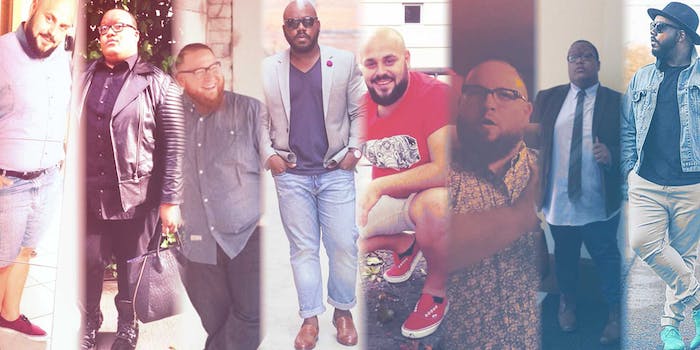 How do you fit a size 42 man into a much smaller world?

Kelvin Davis tries to wiggle into his favorite pair of Gap khakis, and he can’t, for the life of him, understand why they don’t fit. This is his third pair in as many years of the exact same style and size, but when he lines up all of them on his bed, he notices that they’ve been cut progressively smaller.

This is a world where the Fat Jew (AKA Josh Ostrovsky) has a professional modeling contract and the doughy, so-called “dad bod” dominated multiple cycles of the Twitter news cycle. Yet Davis’ struggle is that of a fashion-minded, plus-size man in a waif-driven world.

It’s an all-too-familiar feeling for the fashion blogger. He recalled moments when he’s been in other popular retail chains like J. Crew or Express, slipping on an XL shirt only to find it can barely get past his shoulders. He’ll stand there in both frustration and disbelief, asking himself, Is this really an XL? Designs, it seems, are not made in sizes to fit his frame.

Yet impediments like these haven’t kept the 27-year-old from dressing stylishly: No, he is carving out a space for himself in a world that has made it clear that someone with his build—”like a linebacker”—isn’t welcome.

The “Notoriously Dapper” gentleman, as he’s dubbed himself on his blog and Instagram, posts daily photos chronicling his fashion travails as a plus-size man—and looking damn good doing it. An art teacher by day (his middle school students like to compare his approach to art and his stylish flair to Kanye West), the South Carolina-dwelling husband and father of two has always loved color and used it to express himself from a young age. “My body is the blank canvas and the clothes are like the medium,” he told the Daily Dot.

There is one person that every plus-size man must have on speed dial, and that is his tailor. Much time and money are spent on modifying slim-cut, off-the-rack pieces so that they fit larger-sized bodies other than those depicted in glossy ads.

“As a fashion stylist and journalist, I’ve taught myself a few tricks to help with fit,” fashion journalist and stylist James R. Sanders told the Daily Dot. “If I really like a concept, I’ll even have my tailor deconstruct the garment to make it larger. It sounds more complicated than it is.”

But for Davis, tailoring his clothes feels like too much of an ordeal, and a constant reminder that the fashion industry as a whole ignores bodies like his. “You spend so much time and money [at the tailor] and then what if the tailor makes a mistake?” He asked. “And there’s the extra hustle to drive to the place, put it on, measure it, go back, put it back on, pay for it.”

Davis expressed agitation that brands aren’t taking he and his larger peers more seriously. Particularly, as Sanders points out, that “the buying power of this untapped demographic goes unnoticed among mainstream fashion.”

Looking for a voice

The fashion industry may not acknowledge plus-size men just yet, but in the fashion blogosphere, these men are increasingly making their voices heard.

In 2012, Sanders wrote for Huffington Post about the struggle to find blogs that represented plus-size men like him. “Wanting to believe that the Internet is a smorgasbord of sorts—all-encompassing—I took to the Web looking desperately for any kind of blogs in the U.S. and internationally that might have a big men’s perspective,” he said. “Needless to say, I couldn’t find any.”

Three years later, Sanders says he’s seen a shift since he wrote that grim assessment. Still, he’s not ready to sound the fashion trumpets just yet.

“I think that the fashion industry, especially in New York, is a bit slow when it comes to plus-size menswear.” He pointed to the first-ever Men’s Fashion week in New York this past July and how long it took for that to come to fruition, especially in contrast to other fashion capitals like Milan, London, and Paris. “I think it’s going to take just as long for people to realize that there are plus-size men who care about how they look and want to look fashionable—and will pay good money to do so.”

“There are a lot of guys who are told most of their lives that they’re lesser people because of their size.”

Bruce Sturgell, founder of Chubstr.com, a style website, agreed that there’s a lack of strong leadership within the industry. “There really haven’t been many advocates out there for plus-size men’s fashion,” he told the Daily Dot. “There aren’t a lot of ‘faces’ sort of leading the way.”

But in terms of an existing voice for plus-size men, the men we spoke to all pointed to Chubstr as a bright spot.

“Truth be told, I don’t get my style inspired by actual role models,” Alex Carella, a Milan-based, plus-size menswear fashion blogger told the Daily Dot. “There are, though, curvy and plus-size men that I admire for everything they are trying to build in the men plus-size world.” One, he says, is Sturgell.

It’s not difficult to understand why. “There are a lot of guys who are told most of their lives that they’re lesser people because of their size, so sometimes getting past those issues, and realizing your worth can be difficult,” Sturgell said. “Understanding that your size doesn’t define you, and that you should be able to express yourself through your style, whether you’re a size 26 or 46, is important. It’s something we’re working to show our readers every day.

Enough of the same

But how can the men that Davis, Carella, Sanders, Sturgell, and other bloggers like The Big Fashion and Sash designs represent expect to break through the sameness of the style world?

“I felt like a lot of fashion ads and online stuff, they didn’t have people that looked like me: bigger guys that are stylish,” Davis said of why he started Notoriously Dapper in early 2014. “They just had the slim white guy with the beautiful hair, clothes that fit so perfectly, like an angel. It just seemed to be so unreal.”

Men above a certain size have yet to have this type of watershed moment.

Carella, who has also been featured on the Eff Your Beauty Standard Instagram, writes about body positivity, body acceptance and life as a stylish plus-size man on his blog Uomini di Peso, meaning “Men of weight” in Italian. He spoke to the industry’s closed-mindedness, and noted, “I can only hope that in the future, like what’s happening in women fashion, there will be more attention over male plus-size models.”

The women’s female plus-size market is certainly cause for hope. Tess Holliday’s previously mentioned campaign has certainly changed the tide, while e-retailers like ASOS and ModCloth have made it easier for plus-size women to access fashion-forward and affordable pieces.

Back in May, UK lingerie company Panache featured a variety of “role models” meant to show a wider representation of body sizes in its models, including those who are plus-size. And in a not-so-subtle dig at Victoria Secret’s tone-deaf “Perfect Body” ad, Curvy Kate, another UK lingerie company, recreated the controversial spread using women of varying shapes and sizes.

Men above a certain size have yet to have this type of watershed moment.

Is there a silver-threaded lining?

Sturgell remains hopeful that fashion-forward plus-size men will be recognized as valuable and worthy customers in the coming years, opining “that over time we’ll start to see retailers and brands more positively incorporate men’s plus-size fashion into their offerings.”

Why are retailers ignoring #plussize Men? We take a look at why, and discuss @parkerandpine – a brand trying to do something about it. Why do you think retailers are ignoring big guys?

A recent Guardian story, which delved into the practically non-existent world of plus-size male modeling, gave a less encouraging diagnosis of the world in which these bloggers are trying to make names for themselves as style authorities. “Plus-size brands exist, there’s just no one modelling them,” Morwenna Ferrier wrote.

The piece hinged on the Fat Jew’s statement that he just wants “to inspire people of my size and my gender to be comfortable in their own skin because it’s OK to have a mediocre body and very, very high cholesterol, as long as you look great doing it.” Ferrier spoke to European modeling agencies, including three major UK agencies representing female plus-size models, who told her they had no plans to sign any plus-size men. She found a shred of hope in Germany, where there is a budding demand for larger male models.

But that blockbuster, Robyn-Lawley-on-the-cover-of-French-Elle, has yet to come. And for fashion writers and bloggers, it can be difficult to stay positive while being constantly bombarded by images of what a “real man” is supposed to look like—and trying to squeeze into clothing made for someone entirely different.

“I’m sure that moment will come for us men as well,” Carella said, “but to obtain all this, we have to cooperate and move in unison towards the same goal, to press more brands to acknowledge us and to create retail shops that proudly stand together with other clothes stores in the fashion streets of the world, and not hidden from sight in narrow alleys, far away from people and the city life, that display the shame of being big that we need to fight.”

He added: “For that, we have to be positive and sure of ourselves, and to accept our bodies the way they are, the good and the not-so-good. Let’s go out every day with a smile on our faces and the acknowledgment that we deserve the same attentions and opportunities of anyone, regardless of the weight.”