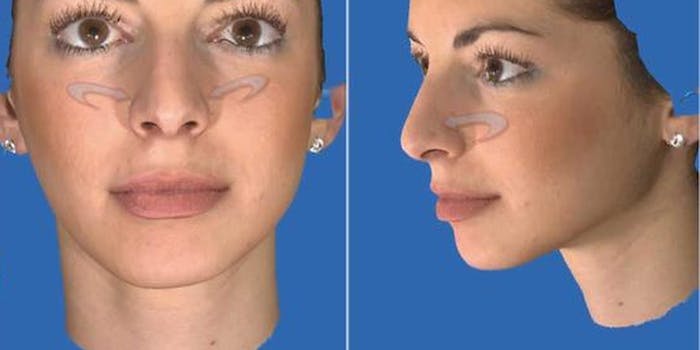 Plastic surgery consultations are now just a smartphone swipe away

Apps are making cosmetic surgery more accessible than ever.

Permanently changing one’s appearance is pretty difficult. It takes money of course, but also time, expertise, and the confidence that you’ll be happier after undergoing voluntary surgery. In spite of all those barriers, the popularity of cosmetic surgery (the appearance-focused sub-set of plastic surgery) continues to rise. According to the American Society of Plastic Surgeons, there were 15.6 million plastic procedures done in America in 2014. Nearly six million of them were reconstructive procedures, with the rest either non-invasive cosmetic procedures like laser hair removal, or invasive surgery like breast augmentation, nose reshaping, or liposuction. That’s a 3 percent increase from 2013.

Yet what those numbers don’t show are the potential customers who lack access, either because the procedures are too expensive, the consultation and recovery process too time-consuming, and the expertise too elusive. Those who want a facelift but who don’t know a trusted surgeon. Those who might want to augment their breasts but aren’t sure if it would look good. Those who want a tummy tuck but don’t have time to shop around for doctors. And as with most things, there are now apps that make the process easier, and more accessible, than ever.

There are numerous apps on the market that allow users to modify their appearance (often comically so) but a few position themselves as simulators of actual plastic surgeries. These apps, like PhotoPlastic and Plastic Surgery Simulator, are essentially glorified versions of Photoshop. They let users reshape their noses and breasts, while warning them that “only a real, certified surgeon will be able to assess what is realistically achievable.” 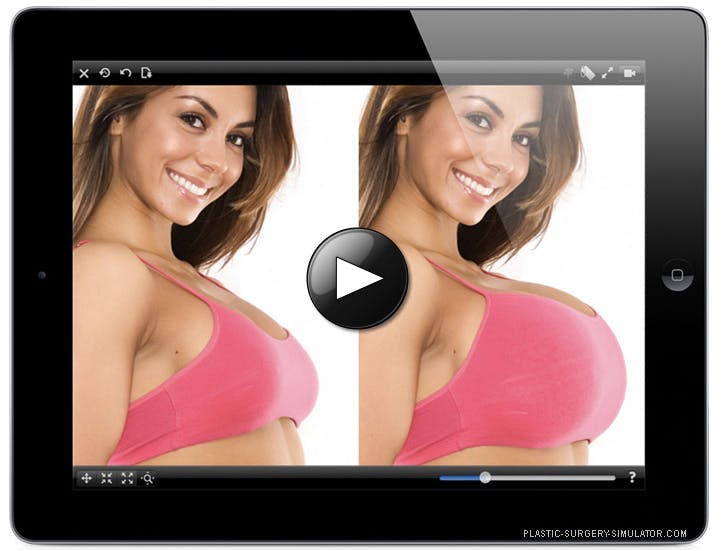 The Plastic Surgery Simulator app is meant “to help in the real surgery decision process,” explained Benjamin Melki, its creator, to the Daily Dot. “I have a good friend who performed a virtual surgery on her nose. She was stunned by the result and how better she looked. A couple of months later she had the real surgery, which was a success,” he explained. On the other hand, Melki continued, there are customers who, after using the app, realized they did not want plastic surgery after all.

It’s one thing to simply play around with your appearance, which arguably all of us do anytime we use a filter on Snapchat or Instagram. What apps like ModYourBod and Lift/Tuck do, however, is tie these augmented realities to actual cosmetic surgeons who are ready to consult with users on their desired services and turn their virtual selves into a reality. Just upload your photo, change yourself around, and forward it on to a professional surgeon. Someone will be ready to consult, and presumably, discuss payment. 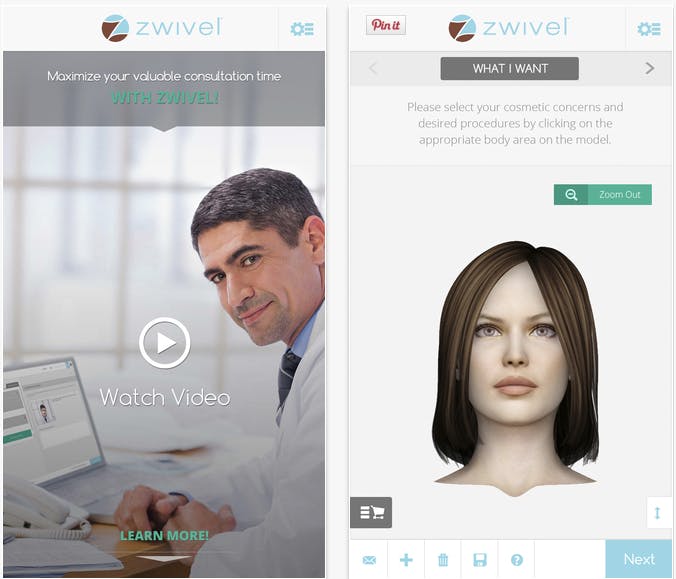 Dr. Gary D. Breslow is the Founder, President, and CEO of Zwivel, a new app that allows users to search for cosmetic surgeons based on the desired procedure and ask questions to assess whether the doctor is a good fit and a consultation is needed. Dr. Breslow said that his app fills a hole in the plastic surgery app market, especially for busy moms. “Ninety percent of all cosmetic patients are women, most of whom have job, or children, or both, and they don’t have time to go from doctor to doctor to find out which cosmetic doctor and which cosmetic procedure is the right one for them,” he explained.  Zwivel, he argues, adds efficiency to the process, and presumably results in more consultations that lead to actual procedures. (However, he noted, “on average, more than 60 percent of all consultations do not result in a procedure being performed,” he said.)

These apps tie augmented realities to actual cosmetic surgeons, ready to consult with users on their desired services and turn their virtual selves into a reality.

In a sense, plastic surgery consultation apps are an outgrowth of the current trend of accessible telemedicine. Surely it is much easier for the patient. But what does ease mean in an industry that, at its worst, thrives on insecurity?

Cosmetic surgery lives in a complicated place. On one hand, women (and men too, but that 90 percent figure says something) have the right to do whatever they want to their bodies, and that includes wanting to adhere to “traditional” ideas of beauty. Trying to parse which of our desires are truly ours and which are influenced by men and/or competition with other women can be exhausting. “Feminism makes me feel free and strong, and like I can express myself the way I want to as long as I’m not marginalizing, hurting, or taking advantage of anyone,” wrote Caroline Cox in NYLON in a piece called “Can feminists get nose jobs?” “I knew this procedure was a thing that would make me happy—not because of how others would see me, but because of how I’d see myself.”

On the other hand, conventionally attractive people are hired more, trusted more, and those beauty standards easily intersect with racism, ageism, ableism and other prejudices. There is no shortage of stories of people who got cosmetic surgery because they thought 36DD breasts would make men like them more, doctors who preyed on a patient’s insecurities to get more work, or women who were otherwise pressured into a procedure. Take the story of news journalist Julie Chen, who was told by an agent early in her career “‘I cannot represent you unless you get plastic surgery to make your eyes look bigger.” Chen defended her choice, and it certainly was her choice, but it appears to have been a loaded one. 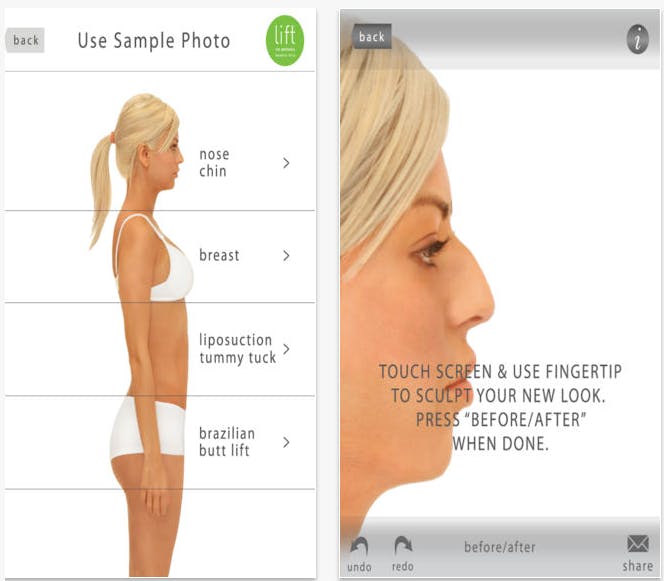 Dr. Breslow said Zwivel screens participating doctors to verify their credentials and certifications, and that doctors are trained to screen potential patients to ensure they can give consent to these procedures. “The reality is that many people are interested in cosmetic procedures and many doctors perform them. Zwivel merely provides the platform to facilitate this interaction,” he told the Daily Dot. In that regard, most apps are just a middleman. Plastic Surgery Simulator offers a disclaimer that only a certified surgeon can truly inform users of what is physically possible, but Melki admitted that “an unprofessional surgeon could show a result that can never be achieved with a real surgery.”

It’s not an app’s job to save women from unprofessional surgeons, nor is it an app’s job to ensure women looking for surgeries have not internalized an ounce of self-hatred or distorted bodily perceptions in their lifetime. Building easier, more accessible ways for people to get safe consultations and procedures is always a good thing. But ease and access are not the only issues when it comes to getting cosmetic surgery, and unfortunately, it’ll take more than apps to dismantle the patriarchy.