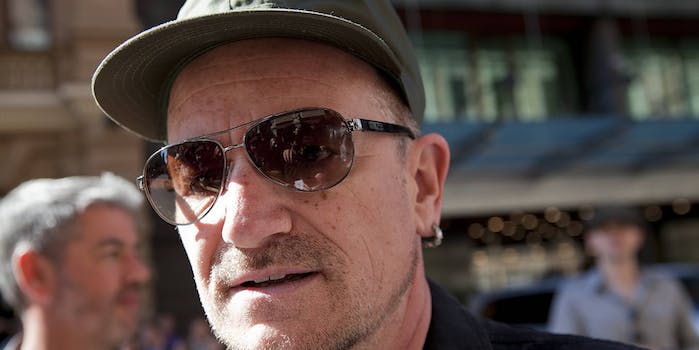 Bono has a history of popping up where people are like, 'Huh?'

Today Glamour announced its “Women of the Year” list and, yes, Bono, a man known to pop in random places, was on it. Editor-in-chief Cindi Leive justified the decision by saying, “It started to seem that that might be an outdated way of looking at things, and there are so many men who really are doing wonderful things for women these days. Some men get it and Bono is one of those guys.”

Ahh yes, because if women don’t make space for men in their own spaces, wherever will men find it?

Bono is being recognized for launching the “Poverty is Sexist” movement, and saying that for sexism to end, men need to be the ones who work and change. Which is very true! Still, lots of people aren’t happy that his recognition is coming in the form of a spot on a list reserved for women.

Ok obviously this is bad but imagine how annoyed Matt McGorry is that he doesn't have this accolade. pic.twitter.com/bX2wWCrUoB

He has apparently made more money from the social media site than from his entire music career.

He was the writer of music and lyrics to Spider-Man: Turn Off The Dark, which critics panned and also holds the record for the most expensive Broadway production in history. It also resulted in injuries for several actors due to its stunts.

5) As a surprise on your iPhone that you can’t delete.

Which he deeply apologizes for.

All of this is to say: Get outta of spaces you’re not wanted, Bono.