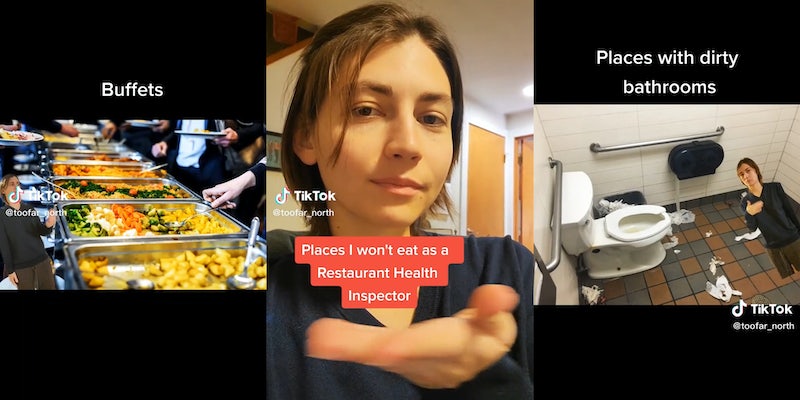 Everyone has their own “tells” for what makes a restaurant a place to avoid. Some may make their exit after seeing fellow diners wait a long time for their order. Others may be struck by dirty dishes left on tables with no one on their way to pick them up.

Enter TikTok user and alleged restaurant health inspector Too Far North (@toofar_north). In a video with over 679,000 views, the TikToker—who says she’s “seen a lot” in her work—documents her red flags for restaurants to avoid, ranging from employee attitudes to the state of the bathroom.

In her video, she lists buffets, places with dirty bathrooms, restaurants with overly-long menus, and locales with unhappy staff as definite no-gos.

In the comments section, she clarified each point.

Buffets, she says, “are unsanitary” with “lots of germ spread.” Dirty bathrooms are indicative of a dirty kitchen. Long menus mean “lots of cheap frozen food,” and unhappy staff shows that the restaurant “usually [has] bad owners.”

“You just described every restaurant ever,” wrote a user.

“That’s almost every restaurant,” agreed another.

“There are plenty of places that meet my guidelines,” the TikToker retorted.

Other commenters, however, backed up Too Far North’s claims.

“Bartender of 8 years here, and I couldn’t agree more especially the staff,” said a user. “It shows good management aka a good restaurant.”

“I use to work at a buffet,” recalled a second. “Never will eat at one again lmao.”

“I learned from a health inspector that if the bathrooms are bad the kitchen is probably bad,” offered a third. “My rule of thumb!”

“True with the menu,” echoed a fourth. “Too many items to make and insure that it’s fresh and ok to serve.”

Still, the long menu became a point of contention amongst commenters, with many saying that cutting out restaurants with long menus would deprive them of some of their favorite eateries.

As one user put it, “Uh oh. There goes Cheesecake Factory. Their menu is a novel.”

The Daily Dot reached out to Too Far North via TikTok comment.