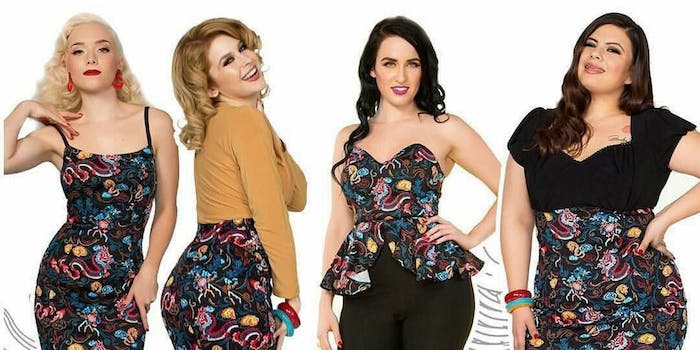 There’s currently a petition calling for a boycott of Pinup Girl clothing, a popular online retailer for vintage-inspired looks, over recently launching a line inspired by “Chinese New Year.” Many are calling it an instance of cultural appropriation, with Pinup Girl using white women to model Chinese-inspired fashions.

The Chinese New Year line features dresses made of black fabric emblazoned with dragons, despite the recent Lunar New Year ringing in the Year of the Rooster. Not a single model wearing the dresses was of Asian descent—until Pinup Girl was called out, and soon after, allegedly changed its site without public acknowledgment.

The initial calls against Pinup Girl were by Jenny Baquing, a 29-year-old photographer from the Bay Area, who demanded answers about the collection from Pinup Girl founder Laura Byrnes on Twitter.

Baquing told the Daily Dot she was angry when she first saw the collection and reached out to Byrnes. She felt unsatisfied with Byrnes’ responses. “I knew early on that I would need to take bigger action to get an appropriate response,” she says. “The idea to boycott began there, but the need for it has grown far beyond those initial transgressions.”

The Change.org petition reads: “This lack of representation along with the fact that PUG chose a dragon print on black fabric for a ‘Chinese New Year’ collection of four items during the Year of the Rooster shows not only how little thought and care they put into this collection, but that they clearly value stereotypical objects of Chinese culture more than they value Chinese people and their many beautiful traditions.”

Pinup Girl founder Laura Byrnes told the Daily Dot that she acknowledged and apologized for the company’s mistakes in a private Facebook group called Pinup Girl Clothing Customer Lounge. She explained that the dragon print was a reissued fabric, first used in 2011, and that the Chinese New Year web collection featured clothing already in production. 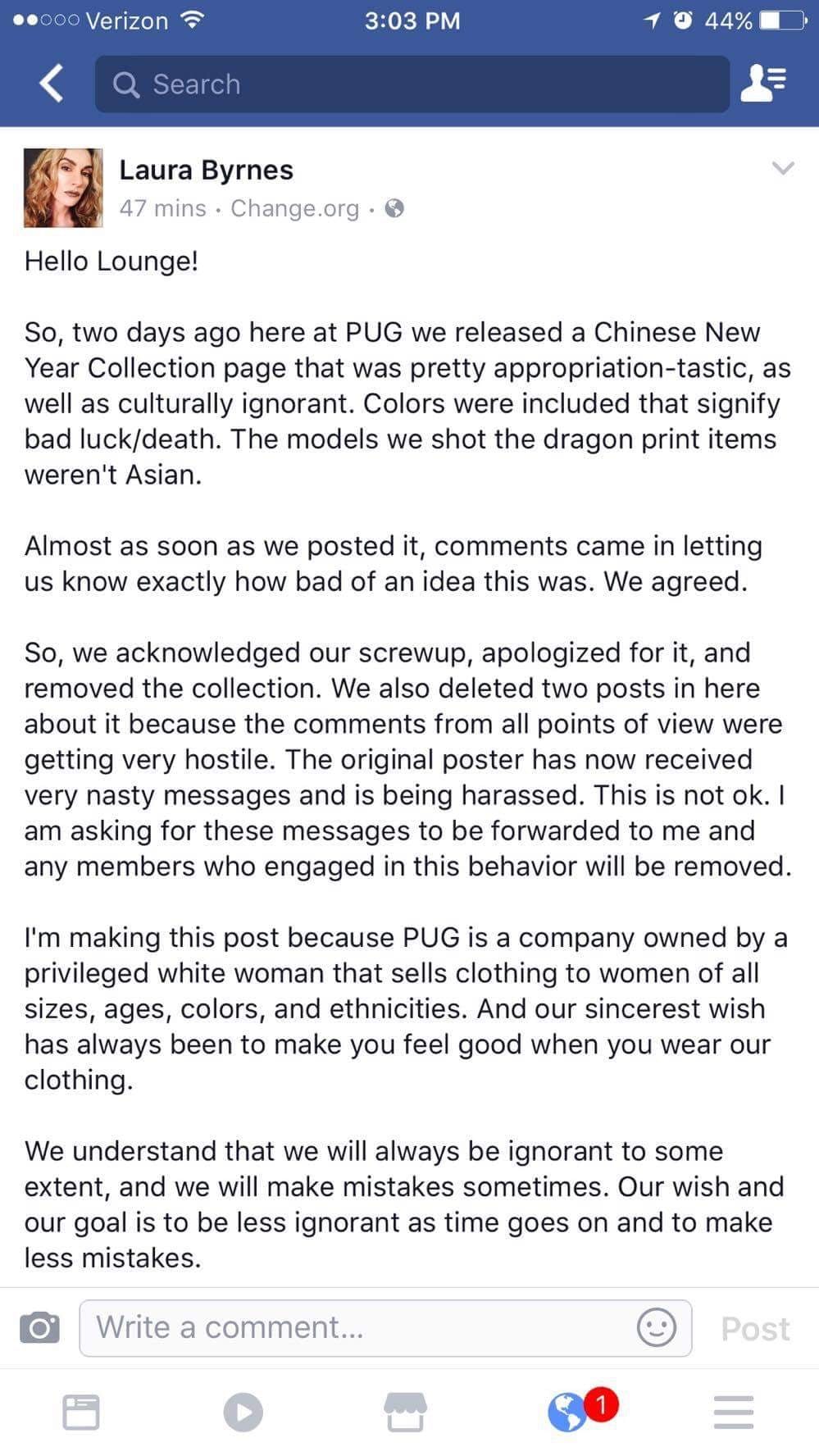 For Baquing, the issue is that Pinup Girl removed references to the Chinese New Year collection and added an Asian model without publicly acknowledging it, that they aren’t removing the print altogether, and that Byrnes has been rude to the women of color who asked her to address this.

When asked if Pinup Girl would issue a more public response, Byrnes said, “We will base our responses upon what 20 years in business has shown us is best, along with our common sense as grown adults.”

Since the petition and boycott started, Byrnes says she is now being personally harassed and the critiques have turned to bullying. As far as the collection, items featured are listed under “Dragon Print” and some items are being modeled by a woman of Asian descent. 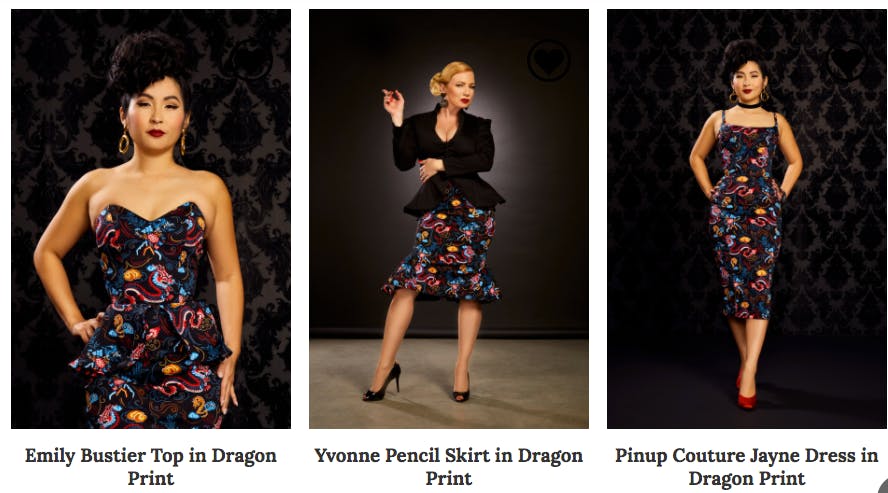 Cultural appropriation is a complex issue, referring not to any one cultural exchange or influence. In clothing, it speaks to the individual and structural ways in which marginalized cultures are punished for dressing traditionally, while those outside their culture use (often bastardized) elements of that traditional dress for fashion or costume. For example, when a white woman wears cornrows she’s fashionable, but when a black woman does she’s “ghetto.” In this case, it’s that white women wearing Chinese-inspired clothing is cool, while Chinese women in America are discouraged from wearing traditional clothing of their culture.

What Baquing hopes is that the boycott can spark a deeper conversation about how to support Chinese artists and designers, and how to create fashion with Chinese-inspired designs that don’t rip-off a culture. “One of my biggest complaints against the Chinese New Year collection was that it clearly didn’t employ any Chinese people to design the pieces. A team of Chinese designers would never have let a green-and-black dragon print leave the idea table, especially not to promote the Year of the Rooster.”

Byrnes disputes this, saying her assistant designer Monica Choe is Korean-American and the only person on staff besides herself who contributes to design.

Ultimately, the boycott is not about telling people to stay in their lanes, but encouraging a thoughtful cultural exchange. “I do not have a serious problem with the idea of white people wearing dragon prints on Western clothing designs, or similar things, if it is done tastefully,” says Baquing. “That’s an important distinction—it is one thing to wear a skirt with a tasteful Asian-inspired print, but seriously, white girls: Stop putting chopsticks in your hair.”

Editor’s note: One of Jenny Baquing’s tweets was removed from this story after the Instagram photo the tweet critiqued—of a woman unaffiliated with Pinup Girl wearing the dress—was deleted.