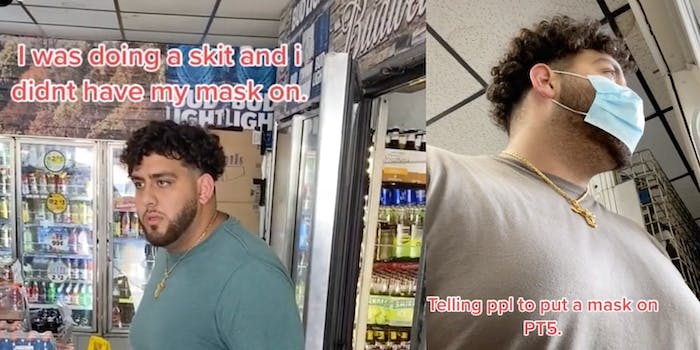 'At the end of the day I just want everyone to laugh.'

A TikTok user who posts videos of people—many of them dubbed “Karens”—having meltdowns over mask-wearing policies was accused of staging the clips. The user behind the account, Joe Samaan, told the Daily Dot that he does, in fact, play “roles” for the videos.

Samaan, who goes by Joegotti on TikTok and Instagram, has posted numerous videos fitting the “Karen” mold. People in the videos verbally attack the person behind the camera, often Samaan himself, for asking them to wear masks in public places.

Other videos on his account show that he is the one not wearing a mask while people around him ask him to wear one.

One TikTok video that stirred controversy was posted July but resurfaced on Reddit on Thursday with many commenting that Samaan stages the videos.

In the video, Samaan is seen holding a pack of beer, with the text, “I was doing a skit and I didn’t have my mask on.”

“What do you care?” he’s heard asking a woman not seen in the video.

“I don’t care what you do,” Samaan says, adding that if she wants to call the cops, she can go ahead.

Most people in the comments section took the side of the “Karen” in this video.

“YOU are the karen,” wrote one user.

“Karen is right…PUT YA DANG MASK ON,” wrote another.

“Did you really think we would agree with you?” wrote another user.

The TikTok thread—and the comments showing his fanbase didn’t have his back—resurfaced on Reddit to show Samaan was dissed by his own fan base.

“Tiktoker posted thinking his fans would back him up. Got absolutely torn apart in the comments,” read the title on the Reddit thread.

But people soon began commenting that the video may have been staged because the woman’s voice sounds similar to voices in Samaan’s other videos.

“Isn’t this the piece of shit that faked the lady with the hole in her mask?” wrote one redditor.

Samaan’s TikTok account, which has more than 750,000 followers, has posted many similar videos. In some of them, he’s the “Karen” having a meltdown in a public place for being asked to wear a mask. In others, he’s asking women to wear a mask in public, which often garners negative responses.

Samaan, who’s based in Lexington, Kentucky, told the Daily Dot that the negative comments don’t bother him. He also confirmed that some of his videos are skits in which he plays a “role.”

“Me telling ppl to put mask on is completely for fun to see people’s reactions,” Samaan said. “At the end of the day I just want everyone to laugh and see little of what i go thru in a gas station.”