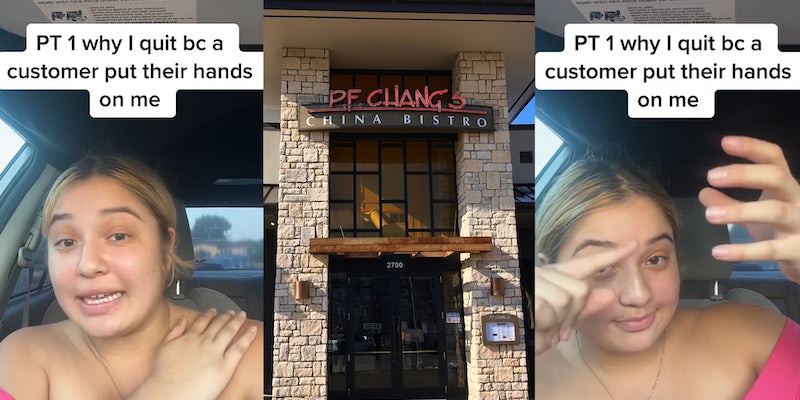 ‘You should’ve had my back, you’re my manager’: P.F. Chang’s server quits after customer puts their hands on her—and manager doesn’t defend her

'The customer is not always right.'

A P.F. Chang’s worker posted a viral video on TikTok explaining how she quit after a rude customer put their hands on her.

Social media is full of videos showing questionable behavior from customers and employees. TikToker Tina (@peachyy.tina) has over 46,000 views on her first video and almost 5,000 on the second, detailing the incident that led to her walking out on her job. In the video, Tina is in her car which is still parked at the La Jolla P.F. Chang’s parking lot as the video was recorded mere minutes after she quit.

“Y’all can tell me if I’m right or wrong, but I’m fucking right,” the TikToker starts off as she begins to tell her side of what happened. She says that although she’s not a busser, she had been helping out by bussing tables that evening. Tina had been clearing a table when a customer gestured to their empty drink glass, rudely asking for a refill.

She informed them that she wasn’t allowed to get drinks for them since she wasn’t their server and that they would need to speak with the person who was taking care of their table. The customer at the table then asked Tina if she could tell their server which, the TikToker says, she was going to do after she finished bussing the table. However, that didn’t sit well with these customers.

Tina says she went back to bussing the table when the woman, “came up to me, she grabbed my arm and she’s like ‘Oh, you’re gonna regret that.’” The P.F. Chang’s worker immediately pointed out the customer’s rude behavior, “Don’t fucking touch my arm,” she recalls saying.

“Well I just want you to know you’re gonna regret that. You’re making a big mistake… You should’ve gone to get my server,” the woman allegedly responded.

The woman proceeded to talk to the restaurant manager, and although she tried to explain her side of the story, Tina says her manager didn’t stick up for her, his own employee. After the conversation, her manager asked if she was OK and that’s when she let him know her thoughts.

“I was like no I’m not fucking OK,” she says in a follow-up video. “She put her fucking hands on me, you didn’t fucking say anything to her, like you think I’m gonna be OK?” She also told her superior, “You should’ve had my back. You’re my manager. The customer is not always right.”

Tina says her manager claimed to have told the rude customer not to touch her but he also said, “next time that happens, you need to do what the customer asked you to.” She expressed her frustration that this same manager had been getting annoyed with her for not doing things right away but instead of letting him know that, she just asked for a 10-minute break to cool off.

However, when her manager told her she had to be back in a hard 10, she felt that he didn’t care if she was really OK. Tina says she called her boyfriend during the break and decided to quit. Before she walked out, this worker had one last thing to say to the rude customers.

She went back up to their table and but instead of apologizing, she told them they were rude and warned them not to touch people again. She also told them that she quit and threw her apron on their table, which, by a stroke of luck, landed right on their food.

Nearly all the video’s viewers sided with Tina and shared their thoughts about the customer’s behavior and the manager’s reaction.

“People are so fucking entitled!!” one person said.

“It’s all bcuz for so long society has put this in our head that the customer is always right [and] really they almost 99% of the time never are,” another tried to reason.

“Nooo you weren’t but next time tip call the cops and press charges on her ass for touching you,” a third suggested.

Many also agreed that the manager should have been more supportive.

“Just the fact that he didn’t back you up!!” one person said.

“Tea girl, customers are bad everywhere, but there’s good managers out there who have their employees’ backs, u did the right thing!” another said, agreeing with the worker’s decision to quit.

Others also shared their own experiences with unhelpful supervisors. “I had a boss who would throw us under the bus..every time!!” said one user.

However, some people felt that the TikToker’s reaction went too far. One person said, “She was wrong for touching you definitely and being rude but as someone who worked in a restaurant business I would’ve dropped what I was doing to go.”

Update 1:33pm CT Sept. 30: In an Instagram direct message to the Daily Dot, Tina added that the customer’s behavior ties into a wider issue of entitlement among customers in upper-class communities.

“People in La Jolla feel very entitled to things and we grow up being taught that the customer is always right but they’re not,” she wrote. “Not just La Jolla, it’s actually just the rich communities in general. Customers and bosses need to realize we aren’t their slaves because we work in a restaurant, and they can’t take advantage of us especially if we’re working for minimum wage.”