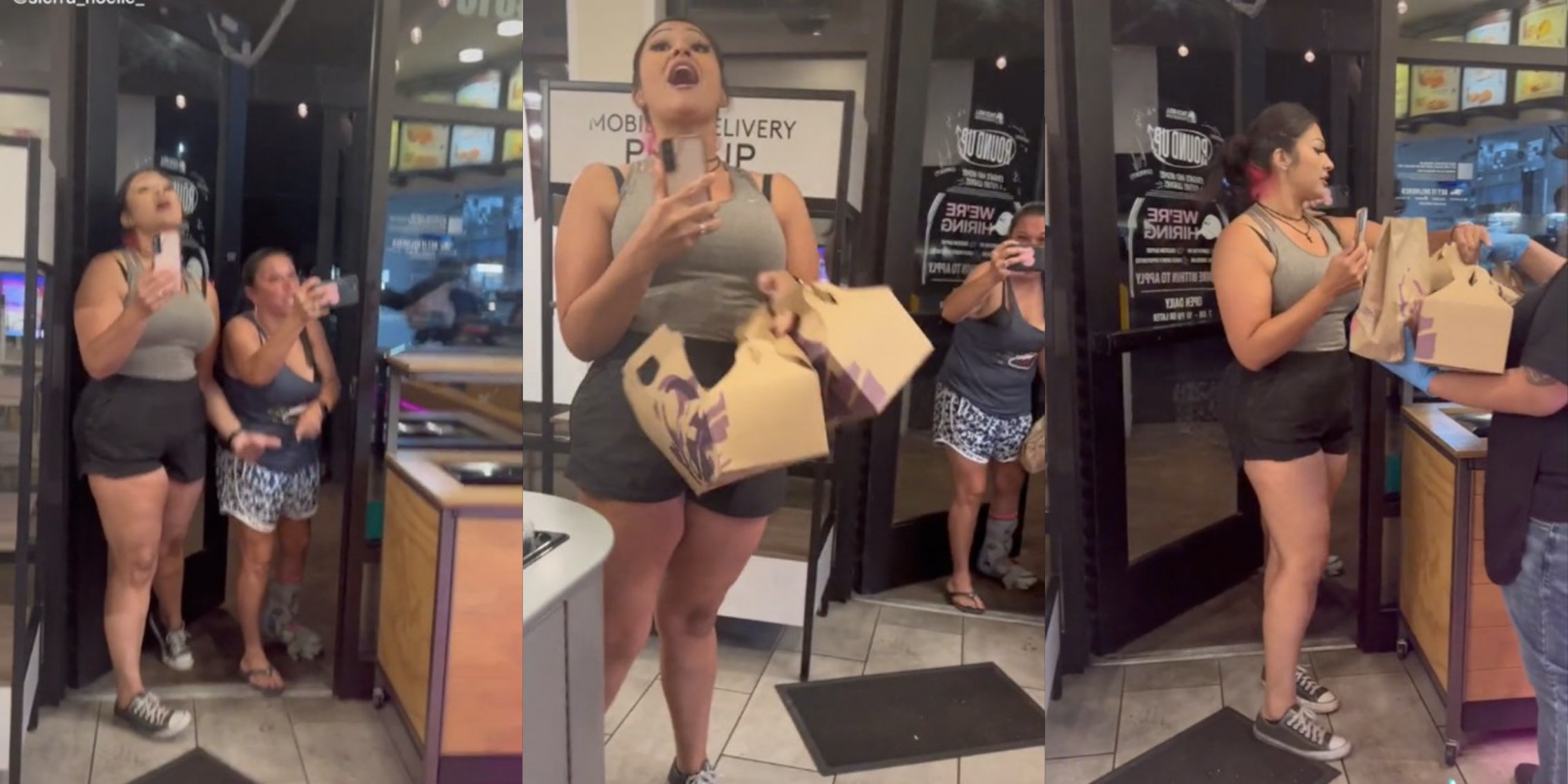 ‘I’m so over this job’: 3 16-year-old Taco Bell workers get verbally abused while running store with no manager

'We literally have no managers here. Just 3 16 y/os and were training someone.'

A Taco Bell worker posted a video featuring two adults arguing with three 16-year-old employees, which begged the question among viewers why three teens are running the store without a manager there to help them, especially during an evening shift.

TikToker Sierra (@sierra_noelle_) captioned the video with some context as to why the women were allegedly incensed: “Lol im so over this job we literally have no managers here just 3 16 y/os and were training someone and she got mad bc she was to inpatient to wait for her big ass order.”

The two women are holding their phones up in the video.

“You’re all recorded every single one of you,” one of the customers says as an employee hands them multiple boxes and bags of food. “We saw you; we saw you,” the woman says to the workers.

“OK, what the fuck … are we supposed to do? Take your fucking order,” someone off-camera urges, indicating the women’s order was ready.

The customer appears to be upset that the teenage worker is using profane language “on the clock,” and the teenager highlights how the women are arguing with minors.

When the employees reiterate the women are arguing with teens, one of the women starts sarcastically screaming “Oh my God! Oh my God!” several times. They continue to argue until the clip ends.

In a follow-up TikTok, two of the Taco Bell employees share their “point of view” of the incident.

They say one of the employees was a new trainee, so there were only 3 teenagers—the two in the video and the sister of one of them—working the restaurant who were familiar with how to operate the restaurant. They say the order the women placed contained “30-plus items” and that the customers came during a particularly hectic rush period that prompted a “long-ass line.” The TikTokers emphasize there weren’t any managers working at the time.

They say they asked the two women to park their car and wait for their food to be brought out. The teens said they made the customers’ food, which they say was a mobile order, after they dealt with the other patrons’ meals. As soon as they were going to bring the order out to women, the women barged into the restaurant and began yelling about having to wait so long, they claim.

“This bitch is with her phone, in my sister’s face yelling at my sister. … She will sit there, and let you yell at her, and I’m not taking that,” one says before noting that’s when the argument started.

The workers were responding to a critical comment from a viewer who seemed to side with the customers.

“So the crazy part about all of this is that this argument and display took place after these ladies had waited damn near an hour for their food. And on top of that they placed the order prior to even getting there and it still wasn’t ready!” that commenter wrote.

Many sided with the workers, arguing that a long wait “doesn’t excuse their behavior.”

The workers also clarified they “are not supposed to make the mobiles until” customers get to the store. “Bc like bro it’s Taco Bell it get soggy a lot of the times the mobiles r placed and the ppl show up hella later after it’s placed,” Sierra wrote in a comment.

Others also criticized how the store was open with no manager there. “If a minor is in the work place a manager must be present to avoid situations like this,” one viewer said.

Taco Bell told the Daily Dot it is “looking into the matter and will take swift and appropriate action if policies weren’t followed.”

There have been a number of reports and surveys conducted on consumer behavior post-pandemic, with many of them indicating there’s been an increase in rude customer behavior toward employees. Time reports, “Americans appear to have forgotten their niceties, especially with those whose job it is to assist them. Lawyers are reporting ruder clients. Restaurants are reporting ruder clients. Flight attendants, for whom rude clients are no novelty, are reporting mayhem.”

In some industries, poor customer behavior has become such a rampant problem that a number of businesses have printed out infographics and other similar materials to help remind folks of their manners. This includes the Rhode Island Hospitality Association’s Please Be Kind Toolkit.

The Daily Dot has reached out to Sierra via Instagram direct message and to Taco Bell via email for further comment.