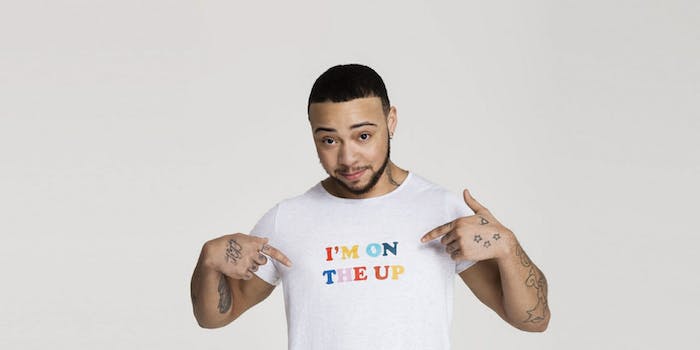 Because men menstruate too.

Subscription service Pink Parcel prides itself on making its customers “feel their absolute best even when that time of the month rolls around.” But the company isn’t just targeting women. Its new ad campaign features Kenny Jones, a transgender man who talks about his relationship with menstruation.

In the interview for the company’s “I’M ON” campaign, Jones opened up about experiencing gender dysphoria, which is when a trans person experiences psychological distress over their body’s incongruency with their gender identity. He recalled how there was “a lot of confusion within myself” when his period began, which helped him realize he wanted to transition.

“I remember that my body didn’t understand what was going on,” Jones told Pink Parcel. “I’d be really aggressive and agitated I just couldn’t wait for [my period] to stop.”

Even getting naked was uncomfortable for Jones before he transitioned. He was a man looking at a body that just didn’t feel right, and he realized he needed to change that.

“It caused a real disconnect and looking down or looking in the mirror and seeing the opposite gender to how I felt was a daily challenge,” Jones explained. “Things like changing, taking showers and anything that would involve me being somewhat naked could make me uncomfortable.”

Jones’ interview is a stark reminder that for trans men, talking about menstruation and vaginal hygiene can be difficult. It’s also incredibly important. Not unlike trans women, society stigmatizes transgender men for their bodies, forcing many to keep their struggles with their periods to themselves. Seeing an open and out transgender man talk about his cycle isn’t just informative, it’s a statement: It’s OK to menstruate while transitioning.

“I think this is a topic that is rarely discussed since so many transgender individuals will attempt to hide this point of their life,” Jones said. “I believe the biggest misconception is that [periods] will be over in a flash—it stays with you forever. Even though I no longer bleed, I still have the pain of periods from time to time.”