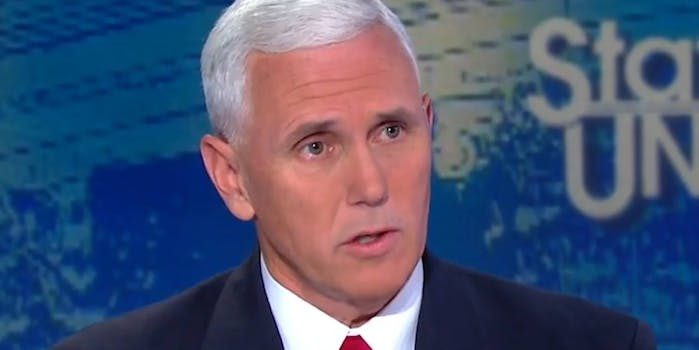 Mike Pence claims that nothing has changed with Trump's position on immigration.

Republican vice presidential nominee Mike Pence has been one of the loneliest men in politics in recent weeks, having to put out fires set by his own party’s nominee, make the case for a more modest, restrained form of conservatism, and weather the indignities of being the relatively anonymous sidekick to a media behemoth like Donald Trump. He can’t even catch a break when he’s going in for a haircut!

But he’s undeniably the softer, warmer face of the Trump/Pence ticket—as strange as that might have sounded months ago, considering some of the inflammatory policies he’s promoted as governor of Indiana—so he needs to hit the weekend shows to put a good face on things.

Which is exactly what he tried to do on Sunday, sitting down to be interviewed by CNN’s Jake Tapper on State of the Union. It was a pretty long interview by morning show standards, clocking in at more than 20 minutes, and Pence had to answer on a range of topics: from immigration, the vocal support his campaign’s drawn from former KKK leader David Duke, to Trump’s widely criticized tweet about the recent shooting death of NBA star Dwyane Wade’s cousin Nykea Aldridge.

Tapper opened up the conversation with the biggest issue currently on the front-burner for team Trump: negotiating the tricky, still-uncertain transition that seems to be occurring on immigration policy. While Trump pledged for months that he’d deport all of the estimated 11 million undocumented immigrants in the Unites States if elected president, he’s recently toned that down in a big way, instead insisting he only intends to round up and deport “criminal” undocumented immigrants.

There’s some ambiguity about what that precisely means, however. As NBC’s Chuck Todd noted in talking with GOP chairman Reince Priebus on Meet The Press, since undocumented immigrants are living in the country illegally, there’s a logic Trump could still deploy that justified mass, blanket deportations if he decided to pull another flip-flop. But from a rhetorical perspective, at least, he seems to be trying to tamp down some of the criticism he’s absorbed over accusations of racism, xenophobia, and intolerance.

Pence, for his part, didn’t want to concede that there’d been any change in policy. In fact, he started off the interview by insisting to Tapper that Trump’s been “absolutely consistent.” Pence said:

“First off, let’s be very clear: nothing has changed about Donald Trump’s position on dealing with illegal immigration. He put this issue at the center of this presidential campaign in the Republican primary, and his position and his principles have been absolutely consistent. We’re going to secure the border, we’re going to build a wall, have a physical barrier, we’re going to enforce the laws of this country, end sanctuary cities, implement e-Verify, and we will have a mechanism for dealing with people in this country that, you heard the word “humanely” again, but it’s going to be fair, it’s gonna be tough, be there will be no path to legalization, no path to citizenship unless people leave the country, he said that very clearly.”

Pence then criticized Democratic nominee Hillary Clinton for supporting “amnesty,” and for supporting the immigration of refugees from the war-torn country of Syria. Tapper followed up on the immigration plan, however, pointing out that for all Pence said, he didn’t address the question of whether every undocumented immigrant will be removed from the country via a “deportation force.” Pence’s response? The deportation force wasn’t a policy, it was just a “mechanism.”He maintained that simplistic language was to blame for assumptions made about Trump’s immigration policy, which the candidate would be unveiling in the next two weeks. To Pence, Clinton’s alleged commitment “to open borders, and amnesty, and executive amnesty, and more of the same” is the real threat to the country. Whereas under a Trump administration, undocumented immigrants who commit violent crimes would not be able “to escape justice,” according to Pence.

Tapper again returned to his still-unanswered question: Will there be a deportation force? The CNN host pointed out that Pence wasn’t pledging the removal of all undocumented immigrants, which was the cornerstone of the original Trump immigration plan.

Pence doubled-down on listing what he was willing to commit to—no path to legalization, and no path to citizenship. Tapper tried a fourth time, asking, “What happens to the 11 million people who are already here?” At this point, it became fairly obvious Pence either wouldn’t or couldn’t answer the question, although it’s unclear whether that’s because it’s politically precarious, or whether the details still haven’t been hammered out by the campaign yet:

“I think Donald Trump will articulate what we do with the people who are here, but I will tell you Donald Trump is more concerned about the American people, American citizens, people who’re here legally, who’re struggling in this economy.”

Pence blamed the economic hardship on a “flood of illegal immigration.” He then blamed the media for fixating on the question of mass deportations. Tapper wasn’t having it, though, questioning just how the media was at fault.

“The idea is Mr. Trump won the primaries in no small way because he had this very forceful position, saying all 11 or 12 million undocumented immigrants will be forced to leave the country,” Tapper said. “Now, you right this minute are not saying that that’s the policy. You’re saying he’s going to be unveiling it in the next few weeks, it’s 72 days until the election.”

Pence didn’t give an inch, however. Showing a bricklayer’s penchant for stonewalling, he repeated that Trump’s principles have been “completely consistent,” and called him a “decisive leader.”

Perhaps realizing there was no limit to how many times Pence would duck the question, Tapper moved onto the issue of birthright citizenship. Trump has previously asserted that children born in the United States to undocumented parents are not real citizens—a place where he disagrees with the Constitution as well as the Supreme Court.

Tapper then turned to questions about racist support for the Trump campaign, mainly in the form of former KKK leader David Duke, who’s running his own campaign for the U.S. senate and crediting Trump for mainstreaming the openly racist, white supremacist views he’s been espousing for years. Tapper asked Pence if he was bothered by Duke’s support.“It does really bother me,” Pence admitted. “And Donald Trump made it clear this week that not only does he denounce David Duke, but we don’t want the support of people who think like David Duke.”

Pence then argued that the recent focus on the Trump campaign’s proximity to and support from racist fringe groups was a diversion from recent allegations of access-trading at the Clinton Foundation, and assailed the Clinton campaign for its rhetoric.

“The fact that a contemptible individual like [Duke] supports my running mate, is no more relevant than the fact that the father of a man who killed 49 people in Orlando, Florida was cheering Hillary Clinton at one of her rallies,” Pence said.

Tapper then took the opportunity to ask Pence about recent coverage of the Clinton Foundation, specifically whether he could point to any evidence that Clinton performed any favors to the foundation’s donors while serving as Secretary of State, the crucial question for the Trump campaign’s accusations of “pay-to-play.”

Pence didn’t have an answer for that, arguing instead that donors having access to Clinton at all was a problem in itself, and cited the Associated Press’ recent report that “more than half of the individual meeting the Secretary of State granted during her tenure” were with Clinton Foundation donors.

For the record, that AP headline was criticized by the Clinton campaign and by some media observers for overstating its case.

The more than half figure is only true if all of Clinton’s meetings with foreign heads-of-state and governmental officials aren’t included.

Pence again suggested that recently leaked emails showed that Clinton Foundation donors got special access and favors from then-Secretary Clinton, but when Tapper again asked him for a specific example of a favor, he had none beyond the access itself.

Finally, Pence was called to account for one of the latest, needlessly inflammatory Trump proclamations, this time in tweet form. On Saturday morning, in response to NBA star Dwyane Wade’s tragic announcement that his cousin Nykea Aldridge had been slain by stray gunfire in his native Chicago, the GOP nominee tweeted the following: “Dwayne Wade’s cousin was just shot and killed walking her baby in Chicago. Just what I have been saying. African-Americans will VOTE TRUMP!”

Hours later, that tweet was deleted and replaced with one that bothered to spell Wade’s first name correctly (it’s Dwyane, not Dwayne), and more than an hour after that, a more docile tweet offering condolences to his family was sent out.

The series of tweets sparked controversy, as Trump appeared to be capitalizing off somebody else’s heartbreak for his own political ends, a pattern that he’s repeatedly demonstrated after other high-profile, tragic incidents.

Tapper asked Pence if he thought the initial tweet was a “presidential reaction to a tragedy.” Pence pointed out that “right after that” (read: more than four hours later) Trump issued another tweet offering his thoughts and prayers, and set about castigating the media for making an issue out of it:

“Can I just make the point, a lot of you people in the media spend more time talking about what Donald Trump said and tweeted in the last three days than you do focusing on what the Clintons have been up to for the last 30 years, so let me just stipulate to that. On this, look, Donald Trump has a plainspoken way about him. And the tragedy of a mother pushing her child on the streets of Chicago, being shot and killed as Nykea Aldridge was, just breaks my heart.”

Tapper replied that that’s why people were offended: that Trump seemed to first and foremost think of how the awful news would benefit his campaign. Pence argued, however, that all Trump was trying to do was speak to the “choice” that the voters faced.

This gave way to a far more sensitive and loaded subject, as Tapper finished the interview by asking about Breitbart chief and freshly minted Trump campaign CEO Steve Bannon. Last week, allegations of physical abuse and antisemitism made by Bannon’s ex-wife during their divorce proceedings went public, putting the already hyper-controversial new hire under hard scrutiny.

Pence said that Bannon has denied the allegations, and “enjoys a very strong relationship with his ex-wife and their two wonderful kids. Tapper asked Pence if he was bothered by the charges, but Pence avoided the issue altogether, saying that it was more of a ‘process story’ about the campaign that “real Americans” didn’t care about.

All in all, it was a pretty grueling gauntlet for Pence, having to navigate multiple issues for which the Trump campaign has otherwise had few compelling responses, and facing repeated follow-ups from Tapper. It’s hard to judge how much good it’ll do the Trump Team. As it stands now, it looks like the questions on Trump’s hazy new immigration policies are only going to get more pointed.