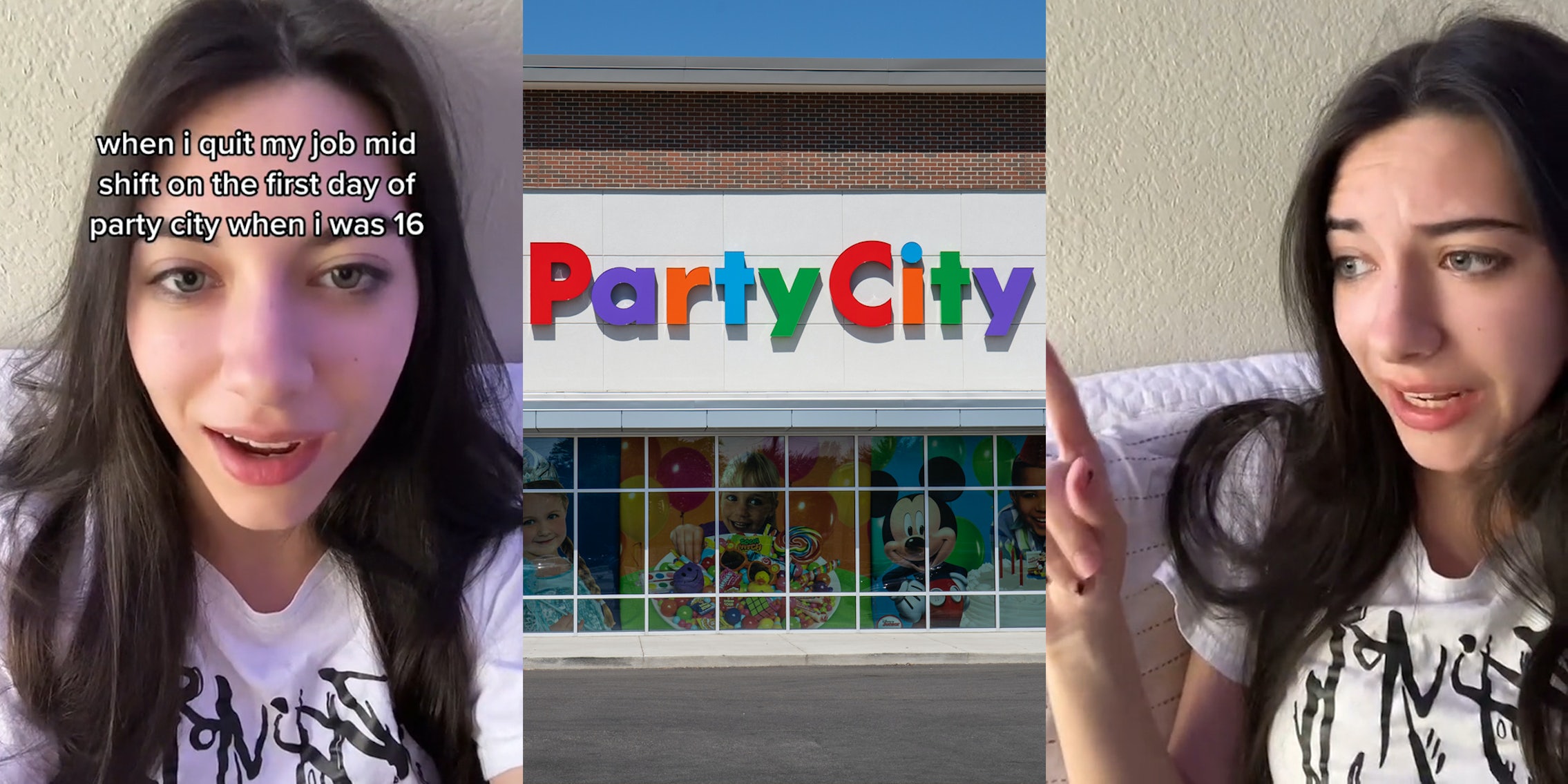 ‘I was trying to make balloons with tears streaming down my face’: Ex-Party City employee shares why she quit on her first day

'I go take my lunch, and I never come back.'

A former Party City employee went viral on TikTok after sharing the story of her first shift—and what led her to quit that day.

In the clip, user Ava (@avadeblassie) re-enacts her experience working at Party City for just four hours when she was 16. She says she was immediately thrown to the wolves, expected to work the floor without any prior retail experience or training due to “the training videos not working.”

Ava was sent to work the front, where the manager claimed a co-worker named “Stacy” would help her out, despite the lack of training. Stacy then put Ava on the register.

“So, what do you do first?” Stacy asked, according to Ava.

Ava then greeted the customer at the register, but she claims Stacy told her each greeting was “wrong.”

“OK, can you show me what to do?” the TikToker then asks.

After Stacy began ringing up the customer’s items, Ava took over. However, Stacy claimed she was doing it incorrectly, without offering her any suggestions.

Then, she was told to answer the phone. When the customer calling had questions about birthday balloons, Stacy refused to help Ava.

“I don’t know if they have any teal happy birthday balloons, this is my first day,” Ava says to the camera.

The TikToker was then instructed to blow up balloons using the helium tank.

“Do it,” Ava recalls Stacy telling her.

However, she says Stacy hardly gave her any instruction. “You just put the liquid inside and then you put it on the tank,” Stacy allegedly told her.

To make matters worse, a customer then began berating Ava for going too slow.

When it came time for her lunch break, however, she decided to walk out.

“I go take my lunch, and I never come back,” she concludes.

“Party city was literally the worst when training people. Same thing happened to me. I was gonna quit my first day too but now it’s been a year,” one viewer said.

“i worked at party city for a while it was awful, im glad you didn’t stay,” a second wrote.

“They did the same thing to me at party city and left me up front to make balloons while the managers were out front taking a smoke break,” a third stated.

Others claimed to have similar work experiences with minimal training.

“This happened when I worked at Dollar Tree and I WAS A MANAGER?! Like how do you now train a MANAGER?!” one person shared.

“My first job was at Macys at 15. I was thrown on register ON THANKSGIVING RIGHT BEFORE BLACK FRIDAY. After TWO HOURS OF COMPUTER TRAINING,” a second stated.

“BRO THIS HAPPENED TO KE TOO. I worked for 4 hours at Wendy’s and my coworkers just went infront to me to do the job I was new bruh so I just sat,” a third commented.

The Daily Dot reached out to Ava via TikTok comment.