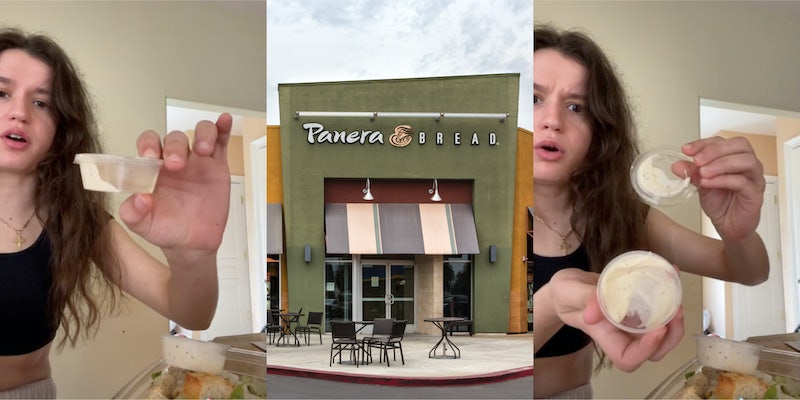 ‘Not only the smaller portions and higher prices but the quality is suffering too’: Customers call out Panera for nearly $10 half sandwich, underfilled salad dressing

'This is why Panera fell off.'

TikToker Kristina (@itskristinamf) received over a million views after explaining why she asks for extra salad dressing when ordering from Panera Bread. In the video posted on Oct. 26, she says that Panera Bread “fell off,” showing viewers a barely filled cup of salad dressing.

“It’s deceiving, is what it is,” Kristina says. “There ain’t shit in here.”

Users agreed with her that Panera Bread is not “it” anymore, commenting on the declining food quality.

One viewer wrote, “Someone once said it’s overpriced cafeteria food and I never went back.”

Kristina replied, “I don’t care what people say but they’re dragging it now with this shit.”

However, a commenter who claims to be a Panera Bread worker explained, “I work there. They tell us to barely fill it because technically they’re only supposed to be an ounce of dressing so that the nutrition information is correct.”

The TikToker then replied, “Ounce of dressing, they need to change the nutrition.”

Another TikToker’s video garnered over 256,000 views when she shared an issue with her Panera Bread sandwich order.

In a video posted by TikToker Kerri (@kerriedawayinnyc) on Nov. 13, she asks how she was served the quality of food that she received for $8.19, tagging Panera Bread in the caption.

@kerriedawayinnyc Ok @Panera Bread i know the economy is a little wonky but how is a 1/2 sandwich that looks like this worth $8.19? I decider to treat myself to a late lunch sans child and this just aint it. #panerabread #overpriced #qualitycheck #longisland #ny #nyc #newyork #candycrush10 #YellowstoneTV #ChevyEVSongContest #dobetter ♬ original sound – Kerri From The Block

“Ok @PaneraBread I know the economy is a little wonky but how is a 1/2 sandwich that looks like this worth $8.19?” the caption reads. “I decided to treat myself to a late lunch sans child, and this just ain’t it.”

Many commenters agreed with her frustration and gave their opinion on the recent quality and price of Panera Bread.

One user wrote, “Panera is one step from hospital food.”

“Panera Bread has really gone downhill,” another user commented. “Not only the smaller portions and higher prices but the quality is suffering too.”

The Daily Dot reached out to Kristina and Panera Bread via email as well as to Kerri via TikTok comment.