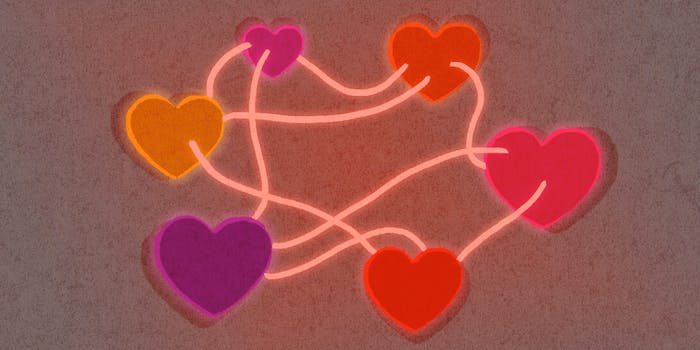 Is this what the ethically nonmonogamous community needs?

Online dating can be exhausting. Even the most popular woman on OkCupid hasn’t been thrilled with her options. And if the dating game is a headache for her, imagine how much harder it is when you aren’t seeking just one boyfriend, but three boyfriends and a girlfriend, too.

For the ethically nonmonogamous, this is the exact problem that a new online dating site hopes to solve. OpenMinded.com, which launched in May, seeks to bring “the ease and flexibility of online dating to the currently underserved world of open relationships,” according to its website. As on other online dating sites, OpenMinded users can create profiles, send private messages, share photos, and make plans to meet IRL.

The ethically nonmonogamous population is sizable in the United States and increasing in visibility. In an interview with Psychology Today, independent academic researcher Kelly Cookson estimated that between 1.2 and 2.4 million couples in the U.S. have engaged in sexual non-monogamy. In the past, the community has identified themselves as poly or open in their online dating profiles, often linking to the profiles of their other partners from their own. Now that sites like OpenMinded and 3nder—a poly alternative to Tinder—are beginning to emerge, poly folks have the option to use dating sites specifically designed for them.

Ethically nonmonogamous couples and individuals often participate in simultaneous, ongoing committed relationships. Occasionally this means dating several individuals separately, dating two other individuals together as a triad, or even dating within a small closed circle of partners. Like any other type of dating, these relationships can be casual and primarily sex-based, and they can also be emotionally deep and lead to cohabitation and other forms of formal commitment.

Many who are ethically nonmonogamous pride themselves on being honest and forthcoming with their partners. They are opposed to any type of dishonesty or violation of predetermined agreements that disrupt the trust among partners. In other words, when practiced with honesty and care, ethical nonmonogamy is never synonymous with cheating.

What is “ethical cheating”?

OpenMinded is the brainchild of Brandon Wade, an online dating mogul whose best-known sites include Seeking Arrangement (for sugar daddies and mommies to find “sugar babies”) and Carrot (where men offer expensive gifts and dinners in exchange for dates with women).

OpenMinded is Wade’s first foray into the world of ethical nonmonogamy. While official site materials use language about “open relationships” and “polyamory”—terminology favored by the ethically nonmonagmous community—Wade has used the term “ethical cheating” when discussing the site himself. His language choice led the New York Times to ask if there is such a thing as “ethical cheating.”

The language choice was a conscious one on the part of Reflex Media, according to public relations manager Angela Jacob Bermudo. The use of the phrase “ethical cheating” was never meant to imply that open relationships are unfaithful by nature, she explained in an interview with the Daily Dot, but instead to easily explain the concept of nonmonogamy to the general public.

“When you say ‘polyamorous,’ most people who are aware of different lifestyles say, ‘Oh, okay, I know that,'” Bermudo said. “But the general public doesn’t understand. So we used [“ethical cheating”] to help people get a general understanding of it.” She added that “open relationships, swinging, and polyamory are anything but cheating,” and that OpenMinded “encourage[s] people to be open with their partners.”

According to Bermudo, OpenMinded’s launch and roll-out have been focused on fostering a general understanding of ethical nonmonogamy—both for the public and the team who created the site, as she was not aware of any staff who identify as polyamorous or open. However, she did note that Wade and his wife have discussed opening their marriage. Indeed, in an interview with Nextshark in May, Wade said they would consider “being monogamish or dating other people” in the future.

Despite the lack of direct experience that Wade and his team have had in open relationships themselves, they claim to have sought input from polyamorous organizations, individuals, and families in their site development process. However, Bermudo would not disclose the specific names of people and groups involved in the research process.

“OpenMinded was more ‘my people'”

OpenMinded launched in May and, as of the time of publication, 181,000 members have joined (membership is free). Erika, 32, joined last spring after the invitation to be a beta tester. She and her husband were relieved that there was finally a dating site specifically for their polyamorous dating style. “I had used OkCupid in the past and met nice people on it, but …it felt very mainstream,” Erika recalled to the Daily Dot. “OpenMinded was more ‘my people.'”

Similarly, Daniel, age 40, told the Daily Dot that he joined OpenMinded “as soon as it was made available.” After relying on mainstream sites like OkCupid and honing his searches to specifically find people who identify as polyamorous, he was curious to try a poly-specific dating site. Unlike Erika, however, he ultimately felt let down by the site.

“[OpenMinded] does nothing to foster a sense of community around polyamory, and does nothing to engage new users,” Daniel said. “It doesn’t offer any fresh way of navigating its catalog—it’s just a simple listing of users. It doesn’t use your default profile ‘looking for’ features as a default filter for search.”

Many of the features Daniel would like are in development or are only now starting to be implemented, according to Bermudo, explaining that community events, a discussion forum, and a new social media campaign, #AcceptLove, are in the works. At present, however, Daniel and others agreed that OpenMinded feels less developed than other dating sites despite its niche.

And what of the concern that OpenMinded is a site for “cheaters,” rather than people who want to date multiple partners with honesty and integrity? Erika, whose experience on OpenMinded was largely positive, considers “ethical cheating” to be a contradiction in terms. “Cheating is not ethical by nature, so it makes no sense,” she explained. “My husband and I are open and discuss everything we do or plan on doing… Cheating is still cheating.” Daniel agreed that the phrasing is wrong, calling the site’s approach “clueless.”

As the company listens and responds to community feedback, it remains to be seen whether OpenMinded will succeed. But one point remains clear: The nonmonogamous community is ready for its own dating website.