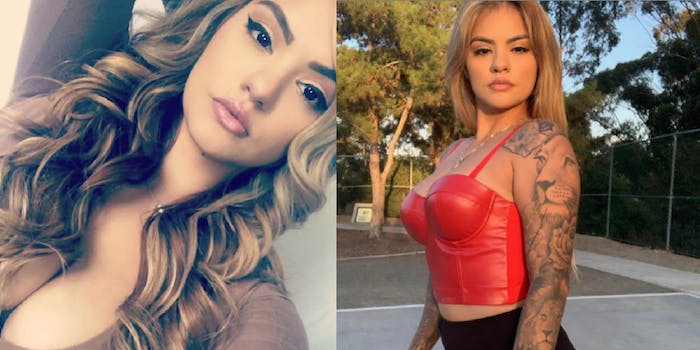 Stephanie Villagomez is a 29-year-old mom from Florida who earns $60,000 a month posting explicit content on OnlyFans. But according to the content creator, she was fired from multiple jobs prior due to her attractiveness.

According to the Daily Mail, her boss fired her from the company she worked at because “his wife became so jealous of the young girl’s good looks.” The type of work she was doing was not disclosed, only that it was in Florida.

When she was a waitress at a restaurant, she was forced out by her co-workers. She told the newspaper, “The co-workers hated me because the guys that would go and eat in there always requested me to help them out and I would always take home more tips than them.”

Being that the owner allegedly liked her so much, she was able to get the waitress position within a week, rather than the months it could take for someone new to the business. “The girls working there wouldn’t even want to talk to me because they were so mad that everyone liked me,” she told the Daily Mail.”They made it difficult for me to work because they were always gossiping about me or not cleaning up.”

Villagomez ended up moving to a different restaurant, which also didn’t work out, so she then moved on to work at a medical marijuana dispensary.

Just as it happened in her other jobs, it happened at this one too. “I would even go to work without wearing makeup and in baggy clothes so I wouldn’t catch people’s attention,” the model explained. “but I guess it was my great customer service that they liked.”

She was then moved to a different dispensary, but the wife of her employer became jealous of her, she alleged. She said the wife was upset the owner was “friendly” with her, gave her “extra hours,” and paid her extra. The owner was given an ultimatum after the influencer and wife got into a spat in which weed strains were allegedly mixed up by the wife so she could pin the blame on Villagomez. “It’s me or her,” Villagomez recalled the wife telling her husband. So they allegedly let her go.

After losing her job, she explained that a photographer contacted her saying that she was able to make a lot of money. “I was scared and nervous but willing to try because at that point, I had no job and needed to pay my rent and bills,” she said. “So I started up a premium Snapchat and it went so well, I made $20,000 in one night.”

This then developed into making an OnlyFans. She now allegedly makes $60,000 a month.

“This has helped in so many ways like being able to travel, take my daughter anywhere she wants to go, pay my bills on time and I’m almost a homeowner,” she said. “I’m very proud of my work and how far I’ve come. I’m now at two million followers and I’m a small business owner.”