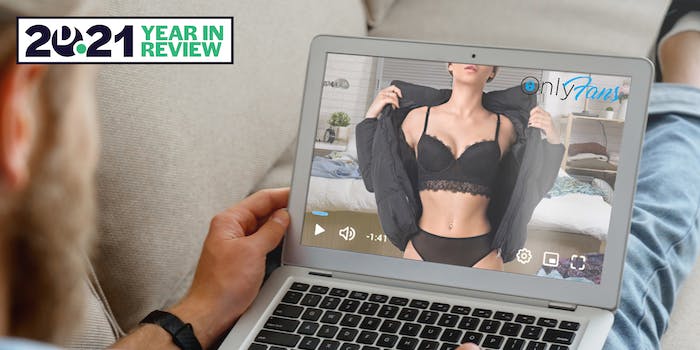 There’s so much work to be done to protect people who sell sex.

In March 2020, the COVID-19 pandemic ushered in a paradigm shift for the adult modeling site OnlyFans. With layoffs, cut hours, and furloughs plaguing many American civilians (or non-sex working people), online sex work seemed like an alternative to keeping afloat. Thinkpieces about quarantine horniness surmounted amid a sudden boom in OnlyFans’ popularity.

As I wrote last year for the Daily Dot, this presented a unique problem for elder sex workers: How were they to give support, guidance, and plenty of patience to these newcomers, many of whom were turning to sex work as a survival need after never considering the option before?

“Unfortunately, AVN and GayVN Stars has not been immune to the banking discrimination that so many of our industry friends have also encountered recently,” AVN’s CEO wrote in a press release. “We have had numerous corporate accounts shuttered in the past year alone.”

Those are just the stories that reached the media. Online sex workers continue to face de-platforming across the internet, from censorship and shadowbans on Instagram and Twitter to account shutdowns across payment processors like PayPal and CashApp. Explicit content may be available on OnlyFans, but models are still purged from the site at random, and a wide assortment of kinks and fetishes remain colloquially known as no-go zones, including golden showers, kidnapping shoots, and hypnosis content.

“I do think censorship will get worse if we as a whole allow it to. I feel like it goes hand in hand with corporations trying to commodify the internet,” Luxxx told the Daily Dot.

The year hasn’t been without its wins, as uphill as they might be. The OnlyFans ban did bring visibility to the whorephobic censorship campaign against online workers, the same way the Tumblr NSFW ban brought visibility to the precarious relationship adult content creators have with major social media platforms. The controversy moved the needle forward by getting civilian internet users to better understand the power banks, credit card companies, and payment processors have over online speech.

This is a huge victory: When I began reporting on hypnosis porn bans and the role financial institutions have in censoring adult content two years ago, the public barely recognized the connection between adult content censorship and MasterCard, despite a decades-long history of financial institutions discriminating against sex workers and the platforms that host them. Now, it’s much easier to find these conversations on social media and digital publications. In fact, the public backlash against OnlyFans put so much attention on financial institutions that the adult platform was able to negotiate its way back into hosting explicit content, according to Financial Times.

“I love that people were talking about the OnlyFans ban. Hopefully, it’ll get people talking about censorship issues,” Luxxx said. “Nobody likes to be told how to spend their money, maybe it will be a wake-up call.”

Of course, public recognition comes only after the storm has blown through, and sex workers lost income amid the panic. What happened to online sex workers who are struggling to make up revenue after the OnlyFans shakeup? What about those sex workers who continue to have their accounts pulled from OnlyFans and funds seized? Mistress Snow, a professional dominatrix who studies sex work and technology at NYU’s AI Now Institute, told the Daily Dot that there’s not much visibility for these marginalized users and their hardships right now. OnlyFans may be a household name, but that doesn’t directly correlate to a wider safety net for online sex workers.

“Half of the people who started doing sex work when the pandemic hit hadn’t done it in person before,” Snow told the Daily Dot. “Are these people now just dipping their toes into in-person work in the middle of a fucking pandemic? Because fucking MasterCard decided whores don’t have to eat anymore or whatever. What is happening to these people who are getting disappeared from the internet?”

This too-little-too-late approach to sex workers’ rights is not an outlier. Amid the Atlanta spa shooting that left eight dead in April, including six Asian women, sex worker rights’ collective Red Canary Song highlighted the racist discrimination and violence Asian massage parlor workers face, including those who do sex work. The collective’s work sparked social media visibility and recognition for migrant Asian sex workers’ plight, particularly after the white man charged with the shootings claimed a so-called “sex addiction” as his motive.

This moment, like the OnlyFans ban, brought visibility to some of the most marginalized sex workers in the U.S. But when Red Canary Song stressed the importance of police abolition—one of its founding principles—public attention slipped. Where was the care and consideration for Red Canary Song’s work before, and where is it now? Once again, the larger white, civilian gaze has turned away from Asian and migrant sex workers’ needs, and it will continue to do so until disaster strikes again.

“Often online work receives so much more coverage because it’s inherently more public-facing. But there are certain barriers that are so seldom spoken about that specific demographics of sex workers face—undocumented workers, for example, have such a hard time working online because many online platforms require documentation to even use their site,” Wu told the Daily Dot. “So often we forget that sex work as a political issue can only be really revolutionary if it’s understood as intersectionally as possible.”

Nor are sex workers just random women, nonbinary people, and men out on the internet. Snow stressed that mutual aid is a core part of sex workers’ lives, both in receiving and giving support within their communities.

“[Sex work] is such feast or famine that sex workers have to depend on community a lot more than the average bear who has a steady income,” Snow said. “I’ve given to mutual aid, I’ve also depended on mutual aid. That’s a binary that legal, non-criminalized workers don’t typically experience in the same way.”

Snow and Wu noted, too, the false binary that comes with the “sex worker/client” divide. As a trans sex worker, my clientele is primarily split between other trans people, gender non-conforming cis people, and queer cis women. Many of my fans are trans sex workers themselves, past or present. Gender-questioning clients may seek me out because the sexual services I provide serve as a safe place for exploring, understanding, and conceptualizing their own gender experiences. I am a client too: I buy online workers’ content, subscribe to their OnlyFans, and order custom requests. (I even had a session with Snow IRL before the pandemic.)

Not every sex worker sees their work as a community service, nor does every sex worker see other sex workers. But sex workers aren’t just randos on the internet. We can and do cater to our own communities’ members, including friends, metamours, and friends-of-friends. And we can, and do, see each other. These community ties are lost in the media depiction of online and offline sex work.

“I think often the presence of queer clients or even other sex working clients has been diminished to the point of invisibility; we so often see sex work as a unidirectional transaction that occurs in a vacuum,” Wu told the Daily Dot. “In reality, queer sex workers have their own community and we feed each other and take care of each other and purchase each other’s services in ways that acknowledge the labor of each other’s struggles.”

These community ties should inspire us to think more critically and seriously about supporting the workers who serve our communities. It’s not enough to pay attention only when the building is on fire. We need to support sex workers before the crisis shows up, before the platforms disappear, and before the revenue drops out. As we move ahead toward a strange new world in 2022, one that promises increased censorship and scrutiny against sex workers, that means getting more actively involved in the fight for full decriminalization of buying and selling sex. It means shining a brighter light on the role that MasterCard, Visa, and major corporate banks play in who gets to sell sex, where, and when.

It also means supporting sex workers in one of the most direct ways possible: Paying them for their work.

“There are so many people in the world who believe that sex workers deserve rights but are still personally scared of purchasing their services because they’re afraid of what it means to be a client,” Wu told me. “And I think that’s something that everyone can work on—untangling internal dialogue about their own proximity (or lack thereof) to the trade of sexual services.”